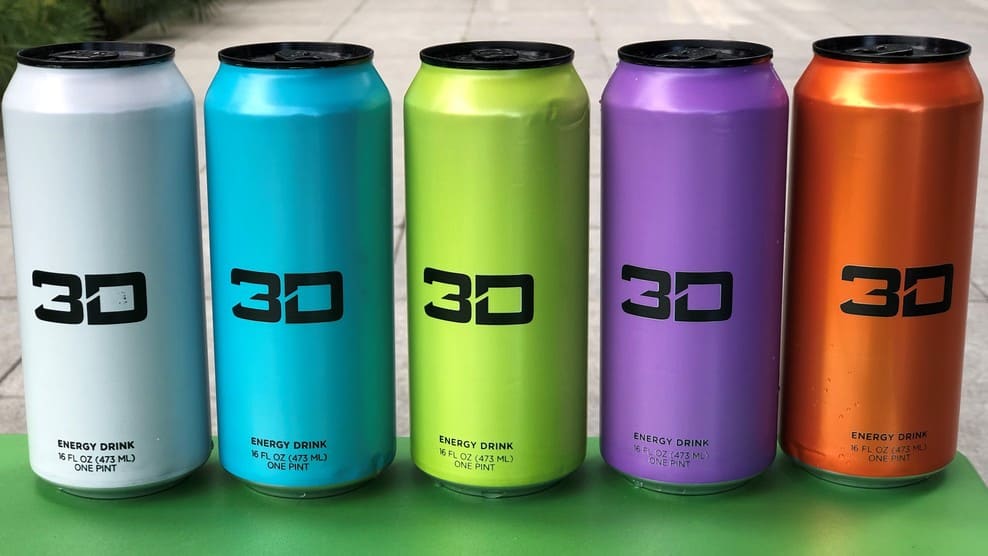 If you need a quick, sugar-free energy boost, 3D Energy has got you covered. Featuring a variety of flavors, and a striking visual design, 3D Energy will give you the energy you need with a stylish touch.

But what exactly goes into a can of 3D Energy, and is it as nutritious as everyone says it is?

In brief, a standard 16 fl.oz can of 3D Energy has 15 calories, 200mg of caffeine and is entirely sugar-free, with no added fats or protein, along with a healthy serving of minerals and B-Vitamins.

For a more detailed look at the nutrition facts of 3D Energy and what exactly it does to you, stick around…

Let’s take a look at the nutritional label of a 3D Energy Drink to see what we’re working with.

You might notice that 3D Energy has 2g of Sugar Alcohol present, and that’s due to the Erythritol used. But don’t worry, because it won’t actually cause any alcohol-like effects.

A regular 16 fl.oz bottle of 3D Energy has 15 calories, which is a fairly low amount for an energy drink of its size.

While not the lowest-calorie energy drink available on the market (a 12 fl.oz can of Celsius has 10 calories, while both Reign and Bang have zero calories), it’s still a step above the calorie content of most sugary energy drinks.

As 3D Energy has a pretty small number of calories, you won’t have to reorganize your diet-plan to include the drink, making it a great pick-up-and-go energy drink that can suit just about any diet.

Of course, that means you’re not exactly getting a lot of actual energy from 3D Energy either.

Given that a healthy young adult is usually recommended a daily caloric intake of between 2000 to 2400 calories for women and 2400 to 3000 calories for men, 15 calories for 3D Energy is a pretty tiny amount in the grand scheme of things.

But if you’re on a diet, the low-calories of 3D Energy are definitely a bonus, and you can always add-in some healthy calories with your daily meals.

If you’re looking for energy drinks that have an even lower amount of calories, take a look at the article I’ve written on the best zero-calorie energy drinks, you’ll definitely find some great alternatives in there.

A list of 3D Energy Drink Ingredients for your viewing pleasure:

How Much Caffeine Is In 3D Energy Drink?

Each 16 fl.oz can of 3D Energy has 200mg of caffeine, which is a little more than is typical of most energy drinks its size.

Although 3D Energy isn’t the strongest energy drink available, it still packs a punch, with the same amount of caffeine as a 12 fl.oz can of Celsius and 40mg more than a 16 fl.oz can of Monster or Rockstar.

Personally, I prefer my energy drinks to have somewhere between 50 to 100mg of caffeine, which is just enough to give me a nice boost, but not so much that it might give me a headache afterward.

With 200mg of caffeine, 3D Energy definitely has a lot more caffeine than I usually like, but depending on your caffeine-sensitivity, and overall metabolism, you might find 3D Energy to be perfect for you.

However, try not to have too much caffeine on any single day as the FDA approves a caffeine intake limit of no more than 400mg per day. Any more than that might lead to potential side effects such as:

In short, so long as you have your 3D Energy Drinks in moderation and don’t go overboard with them, you should be perfectly safe from any caffeine-related side-effects.

3D Energy is entirely sugar-free, but it does, however, contain 2g of erythritol, which is a natural, low-calorie sugar alcohol that tastes pretty close to regular sugar.

Erythritol is a sugar substitute, although unlike artificial sweeteners, they’re found naturally in fruits or vegetables. Even so, large-scale production of erythritol is often derived from fermented glucose.

As erythritol contains 0.24 calories per gram, it makes an excellent sugar substitute. That said, it’s not as sweet or dopamine-inducing as the real thing, having only 70% of the sweetness of regular sugar.

Still, it’s a pretty good sugar substitute, and it helps to keep the sugar content in 3D Energy to within the AHA recommended daily sugar limit.

Besides that, you’ll also get to avoid a dreaded sugar crash as erythritol doesn’t spike your blood sugar or insulin levels. This means that 3D Energy is suitable for you even if you have diabetes.

For more information on erythritol and what it can do, take a look at the video below:

Does 3D Energy Have Artificial Sweeteners?

As both sucralose and acesulfame potassium are zero-calorie sweeteners, you’ll be getting the sweetness without the guilt that comes with it, which is a plus.

However, if you’re not too keen on artificial sweeteners and want something with a mild amount of sugar instead, have a look at the article I’ve written on the best energy drinks with less sugar for some great options.

L-Carnitine is a derivative amino acid, which is claimed to burn fat in your body and turn it into energy.

If you’re relatively young and healthy, you technically don’t need L-Carnitine in your diet as your body probably already produces sufficient amounts of it.

Ginseng is a natural herb that’s often used in food and remedies and is included in as an ingredient in some energy drinks, notably used by Rockstar and REIZE.

Ginseng has a bunch of potential benefits such as:

For a more detailed look, have a look at the article I’ve written all about ginseng.

As for Guarana, it contains a pretty wide range of stimulants (caffeine, theophylline, and theobromine) and various antioxidants.

Research suggests that Guarana may help with reducing fatigue and providing you with a quick energy boost, which makes it a great addition to have in an energy drink.

That said, the majority of Guarana’s purported benefits are attributable to its caffeine content, so it’s also pretty susceptible to caffeine’s shortcoming as well.

Inositol is a vitamin-like substance, which is included in 3D Energy, and it possibly aids the nervous system and improves serotonin modulation.

There’s not much else to Inositol, although it does seem to cause side effects if you ingest up to 18g of inositol a day, which, given the small amount in 3D Energy, doesn’t seem like anything to worry about.

B-Vitamins are a staple in any good energy drink, and they’re also present in 3D Energy as well.

I’ve listed the relevant B-Vitamins found in 3D in the table below, and you can click here if you need a more detailed look at B-Vitamins from the Harvard resource.

Is 3D Energy Drink Bad For You?

As long as you’re in good health and keep your caffeine consumption to a tolerable minimum, you shouldn’t experience any ill-effects from a can of 3D Energy.

3D Energy drinks work about the same as most energy drinks, in the sense that they give you a decent energy boost for a couple of hours, which is mostly because of the caffeine content present in 3D Energy.

As such, any side effects you might feel from 3D Energy is usually due to your caffeine sensitivity, or from having way too many caffeinated beverages in a short period of time.

So as long as you don’t overdo it with 3D Energy, you should be able to enjoy a can of 3D Energy here and there with no ill-effects.

For a more detailed analysis, check out my detailed article on whether 3D Energy Drink is bad for you where I cover things in a lot more detail.

How Many Cans of 3D Energy Should You Have?

I personally recommend that you have no more than one can of 3D Energy Drink per day, due to its relatively high caffeine content.

While there really aren’t many calories or sugar to be worried about in 3D Energy, the caffeine content is a bit of a problem in my mind.

With 200mg per can, a single 16 fl.oz can of 3D has half the amount of your daily recommended maximum caffeine limit, with two cans putting you right up that limit.

Not everyone has a high caffeine tolerance, so having two cans of 3D in a day is definitely pushing it. It may even lead to noticeable side-effects of too much caffeine.

In any case, so long as you stick with only one can a day, and don’t combine 3D Energy with any other caffeinated beverages such as tea, soda, or coffee, having a can of 3D a day seems perfectly fine to me.

3D Energy has a fair amount of flavors for you to choose from, with most of them being of the fruity or candy-based variety

3D Energy is a good energy drink, but here’s a list of some alternative energy drinks that might serve you well if you’re interested in trying some other brands:

While you’re at it, why not have a look at powdered energy drinks? They’re usually more cost-effective and convenient, plus you can adjust the formula to what best suits you:

Not feeling too excited about 3D Energy? Let me introduce REIZE…

REIZE is an awesome powdered energy drink that comes in a convenient 4g sachet. With a sensible 50mg of caffeine, REIZE is completely sugar-free and has just 11 calories per serving.

REIZE also contains a smart blend of taurine, ginseng, and B-group vitamins, giving you the perfect energy boost without the crash afterward.

Best of all, REIZE ships straight to your door for only about $1 per drink.

That’s great value for money and a lot more affordable than most energy drinks out there, including 3D.

Try REIZE today and I’m sure you’ll agree that it’s a smarter choice than 3D Energy.

link to Is 3D Energy Drink Bad For You? (The Truth)

3D Energy drink originates from the United States of America. It is a great energy drink which is pretty tasty. It also has a really cool product design which is both simple and elegant. But...

3D Energy drink is made in the US and features colorful, eye-catching cans with a zesty range of flavors.  But is it truly worth the money you pay for it? Read on to find out what I think of...