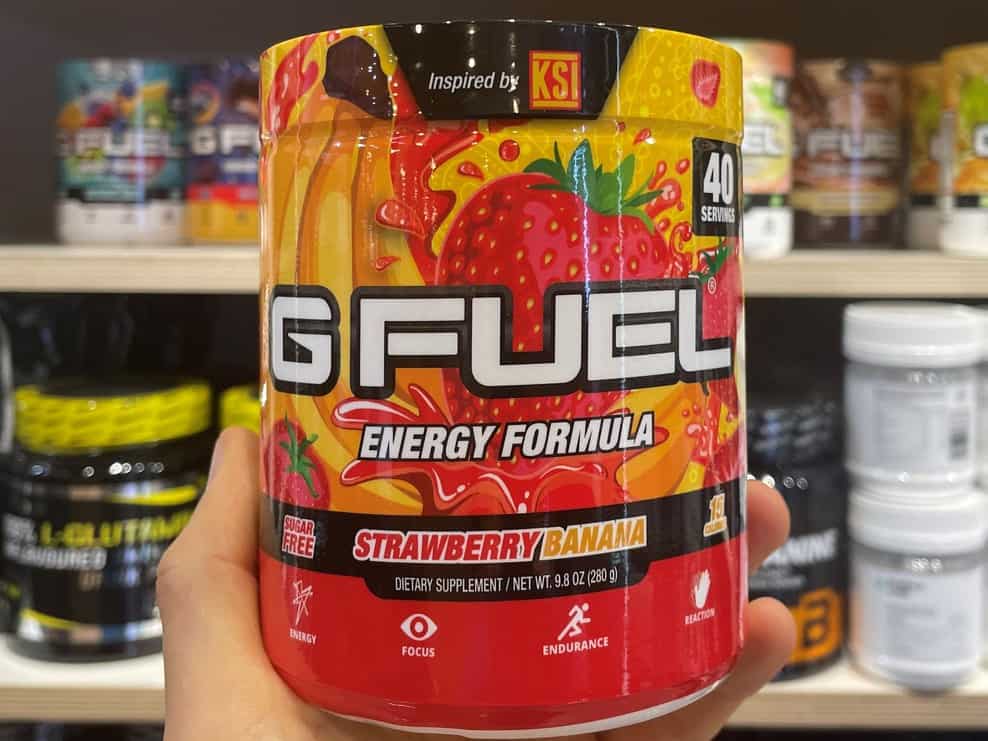 G Fuel is suitable for when you need that extra kick to fuel those long gaming sessions. It’s a pretty great energy drink all around…

But is it actually vegan?

The short answer is, unfortunately, a resounding no. According to G Fuel’s own Twitter account, G Fuel is unfortunately not vegan-compliant, which is a shame.

So there you have it, but if you want to learn more about G Fuel’s ingredients and how well they may suit your particular diet, stick around…

G Fuel has plenty of ingredients and complexes in its formula, which is one of the many benefits this energy powder has over its competitors.

Here’s a list of the more common G Fuel ingredients down below, barring certain flavors and colorings (which vary from flavor to flavor).

Besides 0.15g of caffeine, we don’t know the breakdown of the remaining 1.7g of this complex.

G Fuel’s Focus Complex has 1.2g of the following ingredients:

There’s no information on the exact breakdown of each of these ingredients.

G Fuel’s Antioxidant Complex mostly consists of dried fruit powders which round up to 163.5mg, inclusive of the following:

Again, there’s no information on how much of each individual ingredient is actually included.

If you’re looking for a detailed overview of what each ingredient does, take a look at the article I’ve written on the caffeine and ingredients of G Fuel. It covers everything you need to know about the ingredients of Gfuel in a lot of detail.

While it would be pretty easy to assume that G Fuel is vegan, this is sadly not the case, as you can see from the tweet below.

As for exactly which ingredient prevents G Fuel from being vegan-friendly, take a look at the table below, which I’ve cross-referenced with PETA’s own animal-derivative ingredients list:

Is L-Tyrosine in G Fuel Vegan?

Although L-Tyrosine is often derived from plant or synthetic material, some variations of it come from animal sources, which potentially make it a non-vegan ingredient.

In terms of its properties, L-Tyrosine is a beneficial amino acid that assists in memory and counteracts the effects of sleep deprivation, but whether it’s vegan or not is an entirely different story.

According to the information on L-Tyrosine on PETA’s website:

Amino acids are often of plant or synthetic origin, but it’s sometimes hydrolyzed from casein (milk)

If you’re an ethical vegan, as in someone who doesn’t consume animal products due to environmental and/or animal cruelty reasons, you should probably consider other energy drink alternatives rather than G Fuel.

That being said, if you’re a vegan for health reasons, the L-Tyrosine content in G Fuel won’t negatively impact your overall diet, so read on to learn more about G Fuel from a health perspective.

How Much Caffeine Is In G Fuel?

Each 7g serving of G Fuel has between 140 and 150mg of caffeine, which is actually pretty average for an energy drink of its size. The variation depends on which flavor you choose, because the ingredients do vary slightly from one to another.

Considering that it’s recommended to mix each 7g of G Fuel powder with 12 to 16 fl.oz of water, the caffeine content in G Fuel is actually a pretty standard amount of caffeine for an energy drink.

For reference, it translates to roughly the same as a 16 fl.oz can of either Rockstar or Monster (160mg each).

While I personally prefer to have between 50 to 100mg of caffeine per serving, G Fuel’s caffeine content isn’t all that much higher, so I definitely don’t mind having it every once in a while.

Of course, depending on your caffeine metabolism, 150mg might be just the right amount for you.

On the bright side, since you can adjust each serving of G Fuel to suit your personal preferences, G Fuel is an energy drink that you can enjoy even if you happen to be slightly caffeine-sensitive.

However, you really shouldn’t ever go overboard with caffeine. The FDA approves a caffeine intake limit of no more than 400mg per day. Any more than that might lead to side effects such as:

Consume all caffeinated drinks in moderation and you’ll be just fine.

Does G Fuel Have Artificial Sweeteners?

While free of regular sugar, G Fuel does contain sucralose and acesulfame potassium, both of which are artificial sweeteners.

G Fuel’s sugar-free nature means it’s a lot healthier than most sugary energy drinks and won’t trigger a sugar-induced energy crash, even if you have a little too much of it.

That said, G Fuel does contain sucralose and acesulfame potassium. As both are zero-calorie sweeteners, you’ll be able to get 200 to 700 times the sweetness of sugar with practically zero guilt.

As both Sucralose and Acesulfame Potassium have been approved for general use by the FDA, they work as a healthier alternative to sugar that won’t hamper your diet.

However, there’s still quite a bit of uncertainty regarding the long-term use of artificial sweeteners on the body. So while it’s fine to have on occasion, you’re also better off not having too much of it.

Despite some of the marketing messaging that you might sometimes see floating around, don’t make the mistake of thinking that G Fuel is actually healthy. Sure, it may not be all that bad for you in moderation, but in my opinion, the healthiest drink is always going to be good old water.

While not officially certified, G Fuel doesn’t seem to contain or have any traces of wheat, barley, or rye products, so it’s safe to assume that it’s gluten-free.

If you happen to have celiac disease or you’re simply trying to cut down on the gluten in your life, G Fuel might be a pretty good addition to your energy drink rotation list.

Of course, just because it’s gluten-free doesn’t exactly mean it’s healthy, so always try to keep those servings of G Fuel to a tolerable minimum.

As a side note, although the original G Fuel Powder is gluten-free, G Fuel Cans don’t seem to be entirely gluten-free due to the manufacturing process, so do be aware of that before you go grabbing one off the shelf.

Since they’re a lot newer than the powdered version of G Fuel, perhaps you haven’t seen much good info on G Fuel cans yet. For a detailed look at the ingredients and how it compares to powdered G Fuel, check out my G Fuel cans article here.

As a keto-compliant diet often requires you to cut down on carbs, G Fuel is a pretty good choice, although there are a couple of other energy drinks that might work even better for a keto diet.

The Keto Diet is a low-carb, high-fat diet that offers plenty of purported health benefits, such as weight loss and general health improvements.

As a regular 7g serving of G Fuel only has 25 calories, it’s not too detrimental for a keto diet and can work perfectly well if you plan around it.

Note: the precise calorie count varies between G Fuel flavors. Read the label to check how many calories are in your flavor.

Granted, it’s a lot easier to stick with a zero-calorie energy drink when on the keto diet, but if you’re a die-hard G Fuel fan, you don’t have to worry too much about it either.

On that note, if you’re looking for an energy drink that goes well with your keto diet, have a look at the article I’ve written on the best energy drinks for a keto diet that provides a few great recommendations that won’t break ketosis.

As stated by the official G Fuel Twitter account, G Fuel is not vegan-compliant. However, from a nutritional perspective, there’s actually not a lot in G Fuel that’s detrimental to a vegan-based diet.

If you’re an ethical vegan, you’re probably not going to be picking up a tub of G Fuel Powder anytime soon, for good reason. Since there are plenty of other vegan-certified energy drinks out there for you to choose from, why risk it?

But if you’re a vegan mostly for the health benefits, you’ll probably find G Fuel to be a perfectly serviceable energy drink for your needs, as it really doesn’t have that much of a negative effect on you nutritionally.

Still, if you want a worry-free experience, there are plenty of energy drinks out there that may not be officially vegan-certified but are definitely far more suited for a vegan diet.

For more information on vegan/vegetable-based diets and how they might benefit you, have a look at this informative video:

With over 35 flavors, there’s definitely a G Fuel flavor out there that will suit your taste buds. Here are just some of the flavors that you might enjoy:

Looking for other vegan energy drinks? Here are a couple of great alternatives to G Fuel to get you started.

G Fuel not doing it for you? How about trying something different?

REIZE is a great powdered energy drink that comes in a convenient 4g sachet. With a sensible 50mg of caffeine, it’s completely sugar-free and has only 11 calories per serving.

REIZE also contains a smart blend of taurine, ginseng, and B-group vitamins (all from vegan-friendly sources). It’s the perfect energy boost without the crash afterward.

Best of all, REIZE ships straight to your door for only about $1 per drink, which is outstanding value for money.