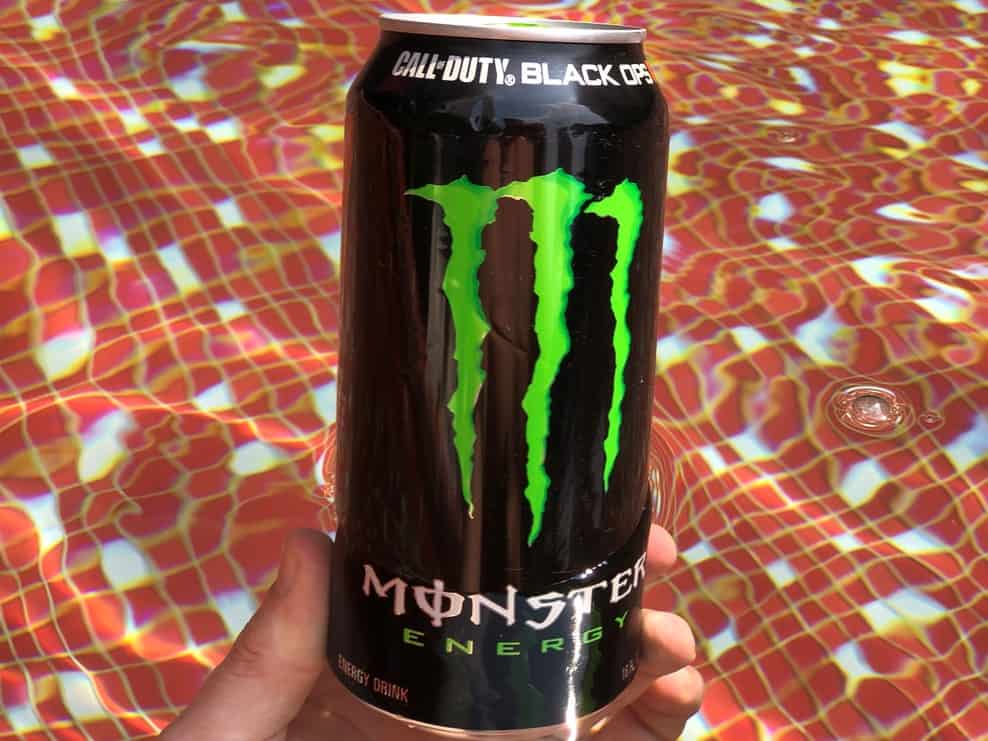 I’m sure you know what Monster Energy drink is, but do you know exactly what goes in a Monster and the nutrients you get from it?

Briefly, a standard 16 fl.oz can of Monster Energy has 210 calories, 54g of sugar, and 160mg of caffeine, along with 370mg of sodium and a sprinkling of B-Group Vitamins.

For a more in-depth discussion with informative tables, read on to find out everything you need to know about Monster Energy—from its ingredients to its overall nutritional value.

Nutrition facts of Monster Energy in an easy to read table:

How Many Calories Are In Monster?

Each 16 fl.oz can of Monster Energy Drink contains 210 calories.

That is a lot of calories for an energy drink and will probably put a dent in your diet.

Although having a Monster will definitely give your cells some energy to burn, it isn’t great if you happen to be working out or you’re on a diet, especially since a Monster will add to your daily caloric intake.

Fortunately, Monster does have a sugar-free option—Monster Energy Zero Ultra, which only comes with 10 calories yet provides the same great taste, making it perfect for calorie counters.

Not finding Monster to be the energy drink you want complementing your diet? I’ve written an in-depth article on the best energy drinks for a diet, so feel free to take a look at it.

Now let us look deeper into Monster by examining its ingredients:

There’s a lot of stuff going on in a Monster Energy Drink can, but let’s take a closer look at some of the more interesting ingredients.

Maltodextrin is a pretty common ingredient, acting as an additive to improve flavor, thickness, as well as shelf-life.

Although it’s considered to be relatively safe in small quantities, Maltodextrin does rank quite high on the Glycemic Index (GI) scale and can cause a spike in blood sugar.

Considering that a can of Monster Energy already has 54g of sugar, the Maltodextrin shouldn’t be your main concern. So, if you’re diabetic, you probably shouldn’t be having a can of Original Monster anyway.

Guarana is a plant native to Brazil boasting to host both stimulants and various antioxidants.

Research suggests that it may help in reducing fatigue and also in providing you with a quick energy boost, which is probably why it’s found its way into Monster Energy Drink.

However, a large part of guarana happens to be caffeine, so do note that the guarana present will add a little bit more caffeine on top of the amount stated on the label.

Panax Ginseng is also present in Monster Energy and has various benefits when consumed, such as:

While ginseng may interact with other drugs such as alcohol and warfarin, it’s usually pretty safe on its own.

To conclude, the ginseng and guarana extracts in Monster Energy may prove beneficial, but the majority of the effects of the drink probably don’t stem from these extracts.

In terms of B Vitamins, Monster offers a generous serving of them in a can, holding up to 200% of the daily value.

Though you may be concerned that the Niacin (Vitamin B3) content may seem a bit high, toxicity from eating foods containing niacin is rare according to Harvard.

How Much Sugar is in a Monster?

The AHA advises that the daily added sugar limit for adults is 25g for women and 36g for men. The amount of sugar in a single can of Monster Energy Drink definitely goes over that limit.

For reference, with 54g, a 16 fl.oz can of Monster has roughly two and a half tablespoons of sugar, which is a lot of sugar for you to have in a day, even if you do happen to have a sweet tooth.

Sure, you could try and sip a Monster slowly over a few hours (though I’m not a big fan of lukewarm Monster), but it doesn’t change the fact that you’re still putting a large amount of sugar into your body.

Too much sugar can also lead to some notable side effects, such as:

Plus, having that much sugar may lead to the inevitable sugar crash, a feeling of lethargy and sluggishness, which occurs when you consume too many carbs in a short period.

That said, you can still have a Monster occasionally, but I would still recommend toning it down if you’ve been having it daily because that amount of sugar really isn’t good for you.

How Much Caffeine is in a Monster?

Each 16 fl.oz can of Original Monster Energy contains 160mg of caffeine.

With 160mg of caffeine, Monster Energy has a pretty middling amount of caffeine when it comes to energy drinks, which often have somewhere between 50 to 300mg of caffeine

That said, I personally prefer to have between 50 to 100mg of caffeine per serving, which is just the right amount to give me a nice boost, but not too much that I get overwhelmed by its effects.

As such, a can of Monster Energy does have a bit more caffeine than I would like, but it still isn’t too much that I would steer off it completely.

Of course, the FDA approves a caffeine intake limit of no more than 400mg per day, and any more than that might lead to side effects such as:

Caffeine metabolism also plays a factor in how likely you are to suffer a caffeine overdose. If you happen to have a high tolerance for caffeine, 160mg shouldn’t really bother you that much.

On the other hand, if you’re newer to caffeinated beverages such as Monster, you might be more inclined to caffeine’s side effects, so keep that in mind before diving off the caffeinated deep end.

When we’re discussing the difference between energy drinks and coffee, it’s hard to determine which is better or worse than the other.

For starters, the caffeine content in a cup of coffee can range anywhere between 0 to 500mg, while energy drinks such as Monster only have between 50 to 300mg.

On the subject of caffeine, at least you know what you’re getting from an energy drink, whereas a cup of coffee isn’t standardized.

As for sugar content, while energy drinks often fall under the sugary caffeinated beverage category, coffee containing sugar, caramel, and whipped cream, isn’t that much healthier than energy drinks either.

So from a pure caffeine and sugar perspective, both Monster and coffee are just about the same. But the major differences lie within their other ingredients, such as antioxidants and B-vitamins.

For my full take on the coffee vs energy drink debate, click here. Aside from that, if you’re wondering which drink works better for studying, take a look at the video below to find out.

How Bad is Monster For You?

Monster Energy Drink is really strong stuff, so it’ll definitely keep you going throughout the night when you need to cram for a test or finalize an important assignment.

That being said, too many Monster Energy Drinks in a day may cause some serious issues to your health in the long-term, so I definitely don’t recommend you have too many of these in a week.

While the caffeine content isn’t really that worrying (unless you’re drinking multiple cans a day), the high amount of sugar isn’t great, both in the short-term (sugar crashes) and long-term due to the health issues it may cause.

As with every caffeinated beverage, you should have Monster Energy in moderation, and if you’re still not too sure, consider asking a health specialist whether it’s okay for you to add Monster Energy to your diet.

How Many Monsters Can You Drink A Day?

I personally recommend that you have no more than one 16 fl.oz can of Monster Energy a day and to also watch your overall intake of Monster for the week.

While it would take 3 cans to reach the 400mg daily caffeine limit, one can already has around double the amount of daily added sugar that the AHA recommends.

That much sugar in the long-run cannot be healthy, and having multiple cans a day is definitely not how you should be having a Monster.

The safest and healthiest way to enjoy Monster is to have one only when you really need it—consuming it in excess is definitely not the right way to go.

As printed on the back of the can, consume Monster responsibly. Your health is important, so you should try your utmost best to take care of it.

If Monster isn’t your thing, don’t worry ’cause there are tons of other energy drink alternatives out there.

Here’s a quick list below to get you started:

There are also powdered energy drinks, which allow you to fine-tune your energy drink servings to suit your needs. Here are my recommendations:

All that sugar in a Monster not doing it for you?

Here’s a better option in REIZE.

REIZE is a powdered energy drink with each 4g sachet having a sensible 50mg of caffeine and is completely sugar-free, having only 11 calories per serving.

It also contains a bunch of other beneficial ingredients such as taurine, ginseng, and B-group vitamins, a well-researched formula that gives you an energy boost without the crash.

Try REIZE today, and you might also find it to be a better choice than Monster.