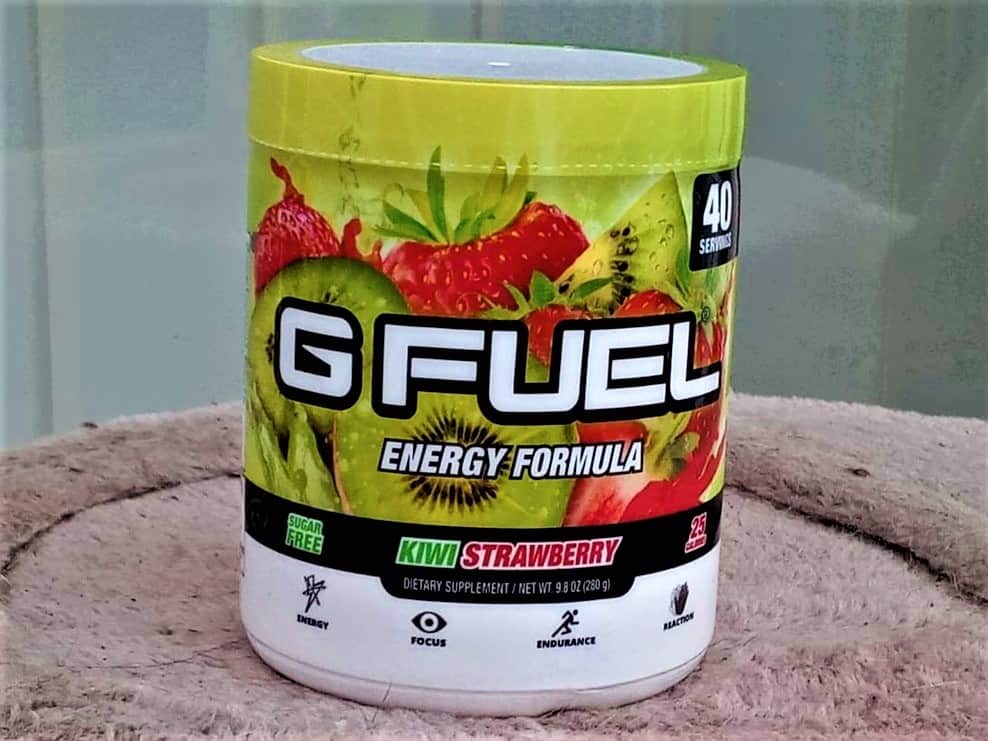 If you’re a gamer, you’ve probably heard of G Fuel. This energy drink brand sponsors at least a dozen YouTube channels and is quite well-known in gaming circles.

G Fuel is advertised as a clean and healthy alternative to sugar-loaded energy drinks.

But before you get swept away by the marketing, let’s answer the question: Is G Fuel bad for you?

The brief answer, thankfully, is no. As long as you live a fairly healthy lifestyle and consume G Fuel in moderation, G Fuel isn’t all that bad for you.

Having said that, it’s also not all that great for you in my opinion either. There is a lot to consider, and a simple “yes” or “no” doesn’t do this question justice.

Now let’s dive deeper into G Fuel, from its ingredients to its caffeine content, and come to a conclusion of whether G Fuel has any negative impacts on your health or not.

Each 7g serving of G Fuel ranges between 10 to 25 calories depending on the flavor you buy.

Given that the recommended daily caloric intake is between 2000 to 2400 calories for women and 2400 to 3000 calories for men, a serving of G Fuel would not negatively impact your diet (if consumed in moderation, of course).

There’s also the incredibly high amount of Vitamins present in G Fuel, namely Vitamin C, Vitamin B6 and Vitamin B12 which are all drastically above the required daily values.

While it might seem like a lot, according to this article by the Harvard Health School, all the Vitamins present are actually well within the upper intake limit.

So you can rest assured knowing that it’s unlikely you’ll experience any side effects from the vitamin content of G Fuel.

If you’ve ever looked at the ingredients label of a G Fuel tub, you’ll notice that it is quite, quite long.

The ability to cram more ingredients in a smaller package without having to deal with the whole liquid aspect of energy drinks is one of G Fuel’s many perks of being a powdered energy drink.

While I would normally list out all the ingredients, it’s far too long, so have a picture instead:

G Fuel contains no sugar and is considered a sugar-free product.

Although being one of G Fuel’s key selling points, the lack of sugar means you wouldn’t get the dopamine hit that is often associated with sugary energy drinks.

But at the same time, it also means you won’t be getting a sugar crash (a feeling of tiredness and fatigue) with G Fuel anytime soon after drinking some.

For reference, the AHA recommended daily sugar limit is no more than 25g for women and 36g for men.

Even though G Fuel doesn’t contain any added sugar, it would be wise for you to keep the limit in mind, because while G Fuel may not contain sugar, other foods that you eat might.

So while you won’t have to add G Fuel to your list of sugar worries, I would advise you to keep track of your overall diet to stay healthy.

Does G Fuel Have Artificial Sweeteners?

Being 200 to 700 times sweeter than sugar, the artificial sweeteners in G Fuel work to compensate for the lack of sugar in the drink, which is why you would find that it still has a fairly sweet taste.

As zero-calorie sweeteners, both Sucralose and Acesulfame Potassium don’t add to the calorie count, which is a plus if you’re someone who keeps track of those.

However, we still don’t know everything there is about artificial sweeteners, so don’t get too hasty on substituting every caffeinated beverage in your life with G Fuel.

On the other hand, if you’re someone who loves the dopamine rush that comes with sugar but are health-conscious, you could check out my article on the best energy drinks with less sugar.

If you’ve read my article on G Fuel Cans, you’ll probably have a rough idea of what maltodextrin is.

Maltodextrin is an additive that is used as both a thickening agent and a preservative.

It also ranks quite high on the Glycemic Index (GI) scale and can cause a higher spike in blood sugar than regular sugar would.

Although it is generally safe in small doses, if you happen to be diabetic, you might want to steer clear or consult a specialist before trying G Fuel cans due to the possible blood sugar spike.

If you happen to be diabetic and don’t want to risk the maltodextrin content, I’ve got an article detailing the best energy drinks for diabetics, which might be useful for you.

Each 7g serving of G Fuel contains 150mg of caffeine, which is a pretty average amount of caffeine in an energy drink.

Considering that each 7g serving is mixed with 12 to 16 fl.oz of water, the caffeine in G Fuel will roughly translate to your standard energy drink such as Red Bull or Monster (151mg and 160mg per 16 fl.oz respectively)

That said, I personally prefer to have between 50 to 100mg of caffeine per serving, which is just the right amount to give me the necessary boost, but not too much that I get overwhelmed by the effects.

So the 150mg of caffeine in G Fuel is a little higher than what I’d like, but depending on your caffeine metabolism, it might just be the right amount for you.

Of course, the FDA approves a caffeine intake limit of no more than 400mg per day. Any more than that might lead to side effects such as:

Given the FDA’s limit, you can have 2 servings of G Fuel tops, as any more might push you over the limit and lead to some (if not all) of the above side effects.

Does G Fuel have Lead?

You might find this fairly worrying warning label on your G Fuel on the possible exposure to lead after having the drink.

While this may make you want to drop G Fuel immediately after hearing that, the CEO behind Gamma Labs (makers of G Fuel) does have this to say:

And there you have it. It appears that the lead warning is more because of a strict Californian law than an actual health concern.

So y’all can put the pitchforks down now.

What Happens If I Have Too Much G Fuel?

Too much G Fuel may lead to a caffeine overdose, as although it may be low on sugar and calories, there’s still a fairly high amount of caffeine present.

Being an energy drink for gaming, G Fuel does what it’s supposed to fairly well, with just the right amount of caffeine and other ingredients to keep you at the top of your game.

However, too much G Fuel may cause more harm than good. With 150mg of caffeine per standard serving, you might find yourself with a caffeine overdose if you don’t keep track of how much you’re having.

In short, as long as you have G Fuel in moderation and don’t go over the recommended dosage (which the labels do warn you about), you’ll be able to avoid the nasty side effects of having too much.

As a side note, if you still happen to be worried, consult a health specialist to check if adding G Fuel to your diet is beneficial for you.

How Much G Fuel Can I Have a Day?

I personally recommend that you have a max of 14g of G Fuel per day. Any more might lead to some notable caffeine-related side effects.

The best thing about G Fuel, being a powdered energy drink, is that you can personally tailor your serving and caffeine content to your taste. You can halve it or double it to your personal preference and caffeine tolerance.

However, I would not recommend going over 14g per day. 14g of G Fuel puts you at about 300mg of caffeine, which is already quite high. So any more and you might find yourself more jittery than energized.

Is G Fuel Bad For My Health?

As long as you don’t have any pre-existing medical conditions, and live a relatively healthy lifestyle, having G Fuel every now and then should be alright.

G Fuel, like every other energy drink and caffeinated beverage, works best in moderation and when you have something to focus on. There’s a reason many people around the world are constantly drinking coffee throughout the day.

Of course, the key to any good energy drink experience is moderation. As long as you don’t have too much G Fuel too often, you should be perfectly fine.

For a more in-depth look at G Fuel and other gaming energy drinks, check out the video below.

G Fuel has a lot of flavors to choose from. Since they don’t have an original flavor, here’s a few selections out of their 35 flavors they offer:

If you’re looking for other great energy drinks that are similar to G Fuel, here’s a quick list to get you started:

There are also some great powdered options for you to consider too:

REIZE is a powdered energy drink with each 4 g sachet having a sensible 50mg of caffeine and is completely sugar-free, having only 11 calories per serving.

It also contains a bunch of other beneficial ingredients such as taurine, ginseng, and B-group vitamins. All coming together in a formula to give you the perfect energy boost without the dreaded crash.

Try REIZE today, and I think you’ll find that it’s a cut above G Fuel.