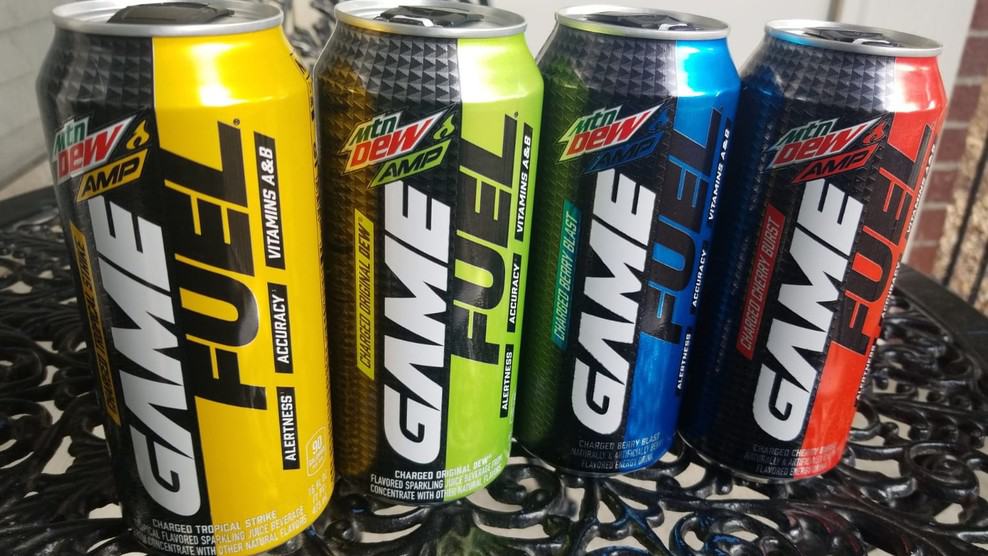 Featuring old favorites such as sugar, caffeine, and B-Vitamins, if you need an energy drink to get you through long gaming sessions, Mountain Dew’s Game Fuel might be up your alley.

However, despite the hype, is Game Fuel actually any good compared to other energy drinks?

In brief, I think that Game Fuel gives you a pretty good energy boost without too many calories, especially if you’re looking for an energy drink that tastes closer to soda.

But if you want a more in-depth answer where we go through everything about Game Fuel, from its nutrition to ingredients to taste, stick around for a deep dive…

First off, let’s take a look at the nutrition facts of a 16 fl.oz Game Fuel in comparison to some of the other popular canned energy drinks on the market.

How Many Calories Are in Game Fuel?

Each 16 fl.oz can of Game Fuel has 90 calories, which is fairly small for an energy drink of its size.

Although Game Fuel doesn’t have a lot of calories, having sugar in its content means it’s not as healthy as zero-calorie energy drinks.

But it certainly has much fewer calories than a 16 fl.oz can of Monster (240 calories) and other high-sugar energy drinks.

Still, not all calories are bad, and if you’re someone who needs a bit of a caloric pick-me-up in their diet, then Game Fuel might be right up your alley.

For reference, the recommended daily calorific limit for healthy young adults ranges from 2000 to 2400 calories for women and 2400 to 3000 calories for men.

While a can of Game Fuel may have a low-calorie count by itself, a few cans will eventually add up, so you probably shouldn’t have too many cans of Game Fuel in one go.

If you would rather do away with calories entirely, take a look at the article I’ve written on the best zero-calorie energy drinks, for some great recommendations.

Here’s a quick list of Game Fuel’s ingredients, with the more interesting ones discussed in more detail below:

There’s 90mg of caffeine per 16 fl.oz can of Game Fuel, which is only about half of what most energy drinks with the same volume of liquid contain.

Considering that the caffeine content in energy drinks can range from around 50 to 300mg per 16 fl.oz, the caffeine present in Game Fuel is actually pretty mild, similar to a cup of coffee.

I personally prefer to have between 50 to 100mg of caffeine per serving, which is just the right amount to give me a nice boost, but not so much that I get overwhelmed by the effects. As such, I really like the moderate 90mg of caffeine contained in a can of Game Fuel.

Of course, if you’re a hardened caffeine drinker, 90mg might not be enough to give you the caffeine boost you’re looking for. That really depends on your caffeine metabolism, which is different from person to person.

For guidance, the FDA approves a caffeine intake limit of no more than 400mg per day. Any more than that might lead to side effects such as:

Your caffeine metabolism determines how much of any energy drink you can handle before you start to experience side effects, so I would advise you to know your limits and adjust accordingly.

How Much Sugar Is in Game Fuel?

Each 16 fl.oz can of Game Fuel has 23g of sugar, which is a relatively small amount compared to other sugary energy drinks on the market.

According to the AHA, the daily sugar limit for both men and women should be capped at 25g and 36g, respectively.

With 23g of sugar, a can of Game Fuel is just below the maximum recommended daily limit for women and above half for men. So, while one can of Game Fuel won’t put you over the limit, two cans definitely will.

While it’s fine to indulge in some sugar every now and then, having too much sugar on a regular basis can lead to some nasty health problems such as:

Having too many sugary energy drinks in a short period can also lead to a sugar crash, which will make you feel sluggish and lethargic after having too much sugar.

Of course, as long as you stick with one can and don’t overindulge too often, Game Fuel’s sugar content shouldn’t be all that troubling.

If you don’t want to risk the sugar, I’ve got an article detailing all you need about the best energy drinks without sugar crashes, so check that one out to learn more.

In addition to having sugar, Game Fuel also contains sucralose and acesulfame potassium, which are both artificial sweeteners.

As zero-calorie sweeteners, both sucralose and acesulfame potassium don’t really add anything, calorie-wise, to the drink, which is great, given Game Fuel already has some calories thanks to the 23g of sugar.

If you happen to have perceptive taste buds, you might notice that the artificial sweeteners do change the ‘Mountain-Dew’ taste slightly.

So while it doesn’t necessarily ruin the drink, you should definitely go in expecting a twist in taste for Game Fuel.

While there are some controversies surrounding the long-term use of artificial sweeteners, the FDA has approved them for general use.

So, as long as you aren’t consuming too much of them, you should be perfectly fine.

Based on my experience, Game Fuel definitely gives you a nice boost, giving you just the right amount of energy without going too overboard. However, I did notice a bit of a slump after a couple of hours.

Within 30 minutes of having a can of Game Fuel, you’ll get a noticeable burst of energy and focus, with an increase in physical energy that lasts somewhere between 2 to 4 hours depending on your metabolism,

Additionally, you’ll also get an alertness boost for a short while after consuming a can, plus an increase in concentration that lasts for at least an hour.

Fair warning though, consuming a can of Game Fuel too quickly might lead to a stomachache, mostly due to the caffeine and vitamin content. Also, as Game Fuel contains sugar you should be prepared for a sugar crash after the effects begin to wear off. It’s not too savage, but don’t be surprised if you start to feel a little sluggish.

All in all, Game Fuel is definitely an energy drink that can keep your energy levels up for either work or gaming and is a pretty good alternative compared to a lot of the more highly caffeinated, high-sugar energy drinks out there.

Game Fuel comes in a variety of flavors. The most notable ones are:

Game Fuel also comes in a zero-calorie sugar-free option, with those flavors being Raspberry Lemonade and Watermelon Shock.

For the most part, Game Fuel tastes a lot like the diet version of the Original Mountain Dew. So, your approval of Game Fuel may depend on whether or not you like the taste of regular Mountain Dew.

You would assume that it’s pretty hard to deviate from the flavor of Original Mountain Dew with such an iconic taste, but Game Fuel does taste quite different, possibly due to the artificial sweeteners present in the drink.

If you’re a regular Mountain Dew drinker, you might find the taste to be reminiscent, but not quite exactly the flavor you were hoping for, owing to all the extra ingredients they’ve thrown into Game Fuel.

But if you’re just here for an energy drink to down to get some extra energy, most people will probably say that the taste is perfectly acceptable, although there are definitely better tasting energy drinks out there in my opinion.

A single 16 fl.oz can of Game Fuel can will run you about $2, depending on where you get it from and if there’s any shipping involved.

Given that a 16 fl.oz can of Monster usually goes for about $2, Game Fuel is priced right around the same mark as some of its competitors.

Game Fuel won’t exactly break the bank, but it’s still a pretty hefty investment if you somehow find yourself having them regularly, so perhaps calculate the monthly/yearly cost of what you’re getting yourself into before buying them in bulk.

Overall, I would give Mountain Dew Game Fuel a solid 8 out of 10.

While it’s not the most exciting energy drink out there, Game Fuel certainly gets the job done at a decent price with its array of good old-fashioned ingredients.

Despite being an energy drink with a lower-than-average sugar and caffeine content, it does its job surprisingly well, giving you some solid hours of energy and focus to take your game to the next level.

I also really enjoy the fact that it has a resealable lid, which makes it infinitely more portable and less prone to spilling all over the place in case I accidentally knock it.

Of course, it does have a rather small selection of flavors, and while healthier than most sugar-filled energy drinks, it still isn’t exactly healthy to drink multiple cans of Game Fuel in a day.

Still, with a satisfactory price and pretty decent taste, Game Fuel Energy Drink will definitely fuel you for what you need to do, despite not specializing in any one thing.

If you’d like another opinion on Game Fuel, take a look at this video below, where they go into the history of Game Fuel, and Mountain Dew as a whole.

While Game Fuel is a pretty good energy drink, here’s a selection of similar canned energy drinks you might also enjoy:

While you’re at it, why not have a look at powdered energy drinks? They’re usually more cost-effective, and you can adjust the formula to what best suits you:

While Game Fuel is a pretty good energy drink, REIZE is definitely my energy drink of choice no matter the situation.

REIZE is a powdered energy drink that comes in a convenient 4g sachet. With a sensible 50mg of caffeine, it’s completely sugar-free and has just 11 calories per serving.

REIZE also contains a smart blend of taurine, ginseng, and B-group vitamins, all of which combine to give you the perfect energy boost for a long gaming session without the sugar crash afterward.

Best of all? REIZE ships straight to your door for only about $1 per drink.

That’s outstanding value for money and a lot more affordable than Game Fuel.

link to G Fuel Cans VS G Fuel Powder (Which Is Better?)

The G Fuel powdered energy drink mix is well-known for its beneficial effects and partnerships, but what about the canned version of G Fuel? If you clicked on this article wondering about the...

From DOTA2, to Counter-Strike to PUBG and beyond, what is the best energy drink to get the most out of your gaming sessions? As we all know, gaming for many hours can take a toll on your body and...