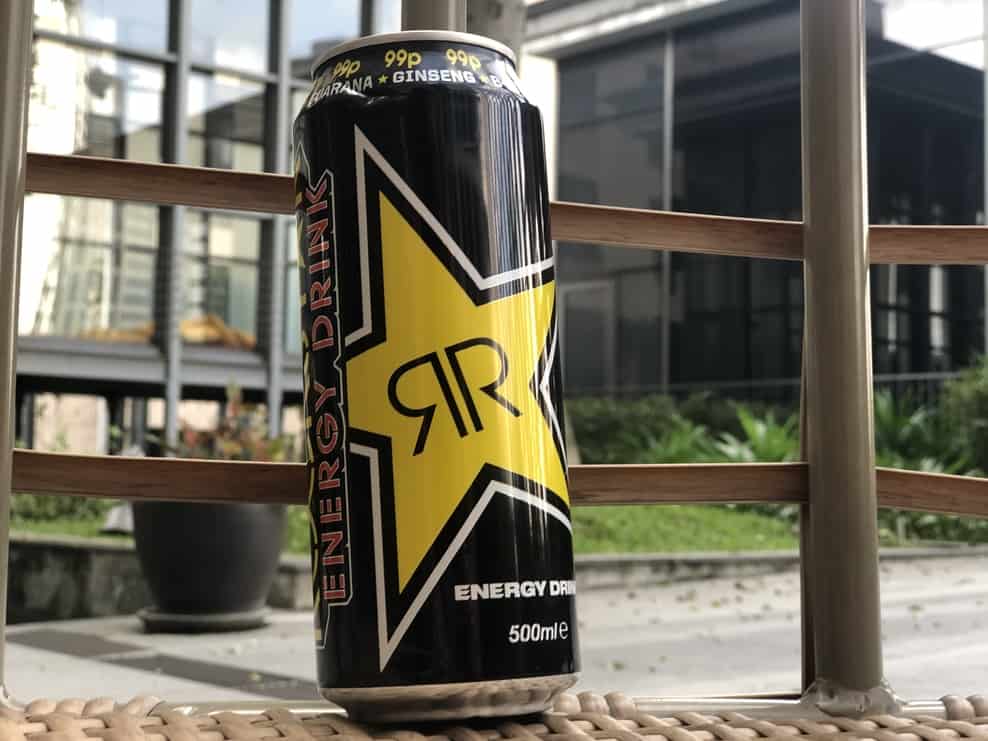 What exactly gives a can Rockstar that kick you need to get through the day?

Simple. It’s all in the content of the 16 fl.oz can of Rockstar, containing 24 g of sugar and 160 mg of caffeine, along with a whole host of other ingredients.

Want a deeper dive into the contents of Rockstar?

Let’s take a closer look at the ingredients and what they do to understand how exactly the drink gives you the boost you need.

What Is Rockstar Energy Drink?

Rockstar is an energy drink brand hailing from the US. It’s described as a drink for “those who live active lifestyles, from athletes to rockstars“.

They come in a variety of flavors and lines, some notable examples include:

That’s a lot of variety for one energy drink brand. So you will definitely not be short of options or flavors with Rockstar.

Below is a table of the total nutritional value of a Rockstar Energy Drink.

Here are the ingredients listed below from a single 16 fl oz can of Rockstar:

Everything looks to be standard fare for an energy drink. The only ingredient that seems specific to Rockstar would be its inclusion of ginseng extract, which isn’t super common.

Guarana is a native Brazillian fruit which contains numerous stimulant and antioxidant properties.

Even if this ingredient sounds alien to you, worry not ’cause guarana is common in many energy drinks and has been proposed to reduce fatigue, boost your energy, and improve your memory skills.

What’s even less known is that a major component of guarana happens to be caffeine, so it’s worth keeping that in mind when you’re watching your daily caffeine intake.

Ginseng is a natural herb that is often used in food and remedies in East Asia, which contain a host of potential benefits such as:

Apart from some fringe cases where it interacts with certain other drugs, ginseng is perfectly safe for general consumption. So don’t worry too much about it.

Vitamins are always helpful in small doses, and their inclusion in Rockstar shouldn’t turn too many heads.

Here’s a quick list of what each B-group Vitamin in a Rockstar does as well as it’s upper intake limit, but I’ve compiled this table below for your ease of reference.

How Much Sugar is in a Rockstar?

While 24 g of sugar doesn’t sound like much, it’s worth noting that the AHA recommends a maximum daily sugar intake for both men and women at 36g and 25g respectively.

Sugar tastes great, but having too much of it over time can lead to some side effects, such as:

Whilst long term excessive consumption of sugar may lead to:

Even though a can of Rockstar might not put you over the sugar limit, two cans definitely will. So keep track of your Rockstar consumption so you don’t give your doctor an unexpected visit in the future.

If you’re looking for something with a little less sugar or sugar-free, check out my other article on the best energy drinks without a sugar crash.

Are There Artificial Sweeteners in Rockstar Energy Drinks?

Sucralose is a zero-calorie artificial sweetener, and is 400 to 700 times sweeter than regular sugar (sucrose), without the calories that usually come with it.

Acesulfame K, or Acesulfame Potassium, is another zero-calorie sweetener, having 200 times the sweetness of sugar.

While artificial sweeteners are generally accepted to be perfectly safe for human consumption, it’s also understandable why you might be aversed by their ‘synthetic’ nature.

Numerous papers have been written on the possible dangers of artificial sweeteners and their possible risks as well.

However, I personally think that the sweeteners in Rockstar shouldn’t worry you all that much.

Considering there’s actually scientific evidence of what too much sugar or caffeine will do to you, worrying about the potential side effects of artificial sweeteners might be missing the forest for the tree.

How Much Caffeine Does Rockstar Have?

A can of Original Rockstar contains 160 mg of caffeine per 16 fl oz can.

At 160 mg, the caffeine content of Rockstar makes it amongst one of the stronger energy drinks available on the market.

While it’s not a whopping 300 mg monster like some other energy drinks, it’s still about twice the amount in a regular cup of coffee.

The US FDA recommends that you have only up to 400mg of caffeine a day as a safe limit. Any more might lead to some noticeable side-effects such as:

As seen on the warning label, it’s also worth laying off the energy drinks if you happen to be fairly young or are pregnant/breastfeeding, as you would be more sensitive to the effects of caffeine.

Personally, I prefer to have energy drinks with a caffeine content of less than 100mg per serve as I have a lower caffeine tolerance. So the caffeine content in Rockstar is a tad higher than what I would like.

That said, everyone has a different tolerance to caffeine, so be sure to know your limits before opting for a bigger can.

What Is Taurine in Rockstar?

Taurine is a naturally occurring amino acid that is often added to energy drinks, such as Rockstar, to provide an energy and metabolism boost on top of other benefits.

While taurine can be derived from animal products, it’s a lot cheaper and easier for it to be made synthetically. So is the taurine in Rockstar, so its presence shouldn’t deter any vegetarians or vegans away from the drink.

Here’s a quick video on what Taurine does and why it’s a component in most energy drinks.

Do Rockstar Energy Drinks Have Alcohol?

Official Rockstar Energy Drinks don’t contain any traces of alcohol in them. (They would get into a lot of legal trouble if they did.)

What you’re probably thinking of are mixed alcoholic drinks where they combine energy drinks with alcoholic ones.

It’s often believed that this reduces the effect of purely drinking alcoholic beverages, which some studies have been trying to figure out.

However, I wouldn’t recommend mixing Rockstar with alcohol purely on the notion that you might feel more sober than you actually are, which could lead to disastrous results.

So stick with just having a Rockstar on its own, it’s got quite the kick as it is.

Many people wonder about the relationship between energy drinks and alcohol, if you want to learn more, check out my article where I cover all of the differences and what you need to know here.

How Many Rockstars Can You Drink A Day?

I would recommend that you only have one Rockstar a day. Two is reserved for situations where you really need the boost and three would be pretty bad for your health in the long run in my opinion.

It’s not so much the calorie or caffeine, but the sugar that will do you in. Drinking 2 cans of Rockstar puts you well over the recommended daily sugar limit, which obviously isn’t great for your health.

Add that to the number of days in a week, and your blood sugar might exponentially increase if you’re not too careful.

So be aware of how many Rockstars you have a day, and be sure not to combine energy drinks with strong coffee or tea, because your body might not react very well to having that much caffeine in it.

Rockstar vs Other Brands

Here’s a quick comparison of calorie, sugar and caffeine content between Rockstar and other big name competitors (namely Monster, Bang and Red Bull).

Rock and roll not quite your style? Or perhaps you’re looking for something with a similar taste? Either way, here are a few energy drinks I think you’ll enjoy that are similar to Rockstar:

Tired of canned energy drinks with too much sugar in them? Why not try something new and give REIZE a shot?

REIZE is a powdered energy drink which you can mix with just about anything. Each 4g sachet has a sensible 50mg of caffeine and is completely sugar-free, having only 11 calories.

It also contains a whole host of beneficial nutrients such as taurine, ginseng, and B-group vitamins to give you that much-needed energy boost you need to get through the day.

Best of all, you can get it shipped straight to your doorstep for only around $1 per drink.

So try REIZE today, and I’m sure you’ll agree with me that it’s a smarter choice than Rockstar.