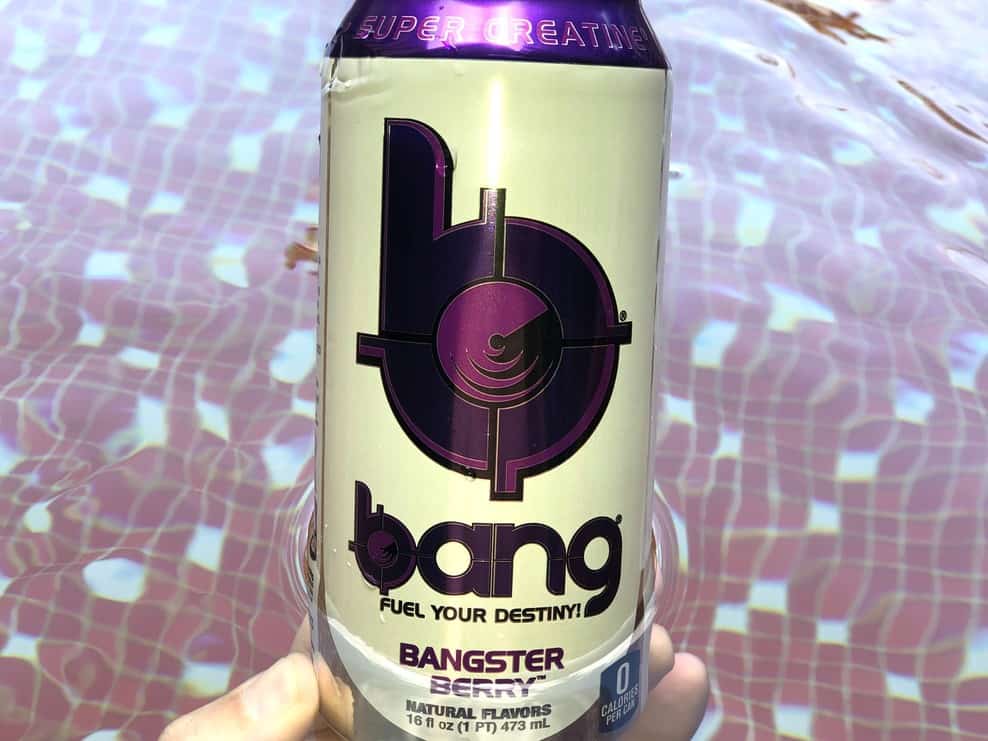 If you need an energy drink for your pre-workout needs, you can’t go wrong with Bang. This sugar-free, highly caffeinated blend will keep you going for a while, with other helpful ingredients in the mix as well.

But what actually goes into a regular can of Bang Energy anyways?

In short, Bang Energy is advertised as having no calories, 300mg of caffeine as well as being sugar-free, along with a serving of EAAs (Essential Amino Acids), Super Creatine®, and CoQ10.

Read on for a detailed discussion on Bang Energy, from its ingredients, to just how nutritious the energy drink actually is.

How Much Energy Is In Bang?

Each 16 fl.oz can of Bang Energy contains no calories, owing to a lack of sugar in the drink.

For comparison, even an 8.4 fl.oz of Red Bull has 110 calories, which is quite a bit considering the smaller size of the energy drink.

If you’re on a diet or you’re counting calories, you’re in luck. Bang’s zero-calorie nature means it will fit into your diet without the need to make adjustments as you would with other sugary energy drinks.

Of course, no calories means your cells aren’t exactly getting any usable energy from Bang, so if you’re looking for energy drinks with some calories and not too much sugar, this other article I’ve written has you covered.

Here’s a list of Bang Energy Drink ingredients to get you up to speed on what exactly is in the can.

While I’ll be discussing most of these ingredients below, here’s a more detailed and realistic look at Bang Energy from the lab test I commissioned and wrote about.

It’s an eye-opening read to say the least.

Each 16 fl.oz can of Bang Energy Drink contains 300mg of caffeine.

With 300mg of caffeine, Bang Energy is one of the most highly caffeinated energy drinks on the market and will definitely leave you feeling very awake after having one.

Since I personally prefer my energy drinks to have between 50 to 100mg of caffeine per serving, 300mg is definitely a bit much and isn’t something you should have if you happen to be sensitive to caffeine.

Of course, if you’re more used to caffeine and have a higher caffeine metabolism, 300mg of caffeine might be just what you need to get you going.

Still, it’s best not to have too much caffeine. The FDA recommends you limit your daily caffeine intake to a maximum of 400mg. Going over that limit may lead to some serious side effects, such as:

Of course, according to the lab test results, the caffeine content in Bang was rated as either 34.06mg or 188mg of caffeine per 16fl.oz.

So barring any discrepancies, the caffeine content in Bang Energy Drink might actually be a lot lower than advertised.

Still, on the off-chance that the lab results might be wrong, it’s still best to assume Bang Energy Drink contains 300mg of caffeine to be safe. Hence, you shouldn’t have too many cans of Bang in a day to avoid the risk of a caffeine overdose.

Does Bang Energy Have Sugar?

You’ll be pleased to know that Bang is entirely sugar-free and won’t greatly affect your health much, like many other sugary energy drinks.

While the lack of sugar is great from a health perspective, you’re probably not going to get the same sugary ‘rush’ you do from other energy drinks.

That being said, you’ll also get to avoid the possibility of suffering from a sugar crash with Bang Energy as the lack of sugar won’t raise your blood sugar level.

As always, try not to have too much sugar in your diet in general. For reference, the AHA recommends a daily sugar limit of no more than 25g for women and 36g for men.

If you’re looking for energy drinks that aren’t completely void of calories, have a look at the best energy drinks with less sugar article I’ve written, which you may find interesting.

Does Bang Energy Have Artificial Sweeteners?

Sucralose is a zero-calorie sweetener that is about 200 to 700 times the sweetness of regular sugar.

As it has zero-calories, sucralose doesn’t really have any nutritional value apart from adding a fair bit of sweetness to Bang Energy Drinks.

Artificial sweeteners have been approved by the FDA, so as long as you’re not consistently having too many cans of Bang a day, you shouldn’t need to be too worried about the sucralose content in Bang.

Bang contains the full spectrum of essential amino acids, which include BCAAs such as L-leucine, L-isoleucine, and L-valine, as well as lysine, threonine, phenylalanine, histidine, methionine, and tryptophan.

EAAs are essential amino acids that can’t be naturally produced by the body and can only come from foods.

If you have a well-rounded diet, you would probably get enough EAAs that the supplementary amount found in Bang isn’t really going to make much of a difference at all.

On that note, results from the lab test I did on Bang showed that the EAA content in Bang might not be entirely accurate, so check out the full report by clicking on the link above if you want to learn more.

Super Creatine is a proprietary ingredient of Bang Energy and is supposedly normal creatine that has been bonded with an amino acid for better absorption.

Creatine is generally thought of as a sports supplement, and has a variety of potential benefits, such as increasing athletic performance and muscle strength.

However, it should be noted that the effects of creatine are actually weaker when taken in combination with caffeine, of which Bang Energy has 300mg.

So it’s questionable if the creatine content will have any effect at all given the simple fact that Bang has quite a bit of caffeine in it.

For a more detailed look, I’ve written everything you need to know about the creatine in Bang Energy in my other article, which you’ll definitely find informative.

It’s definitely worth a read.

Coenzyme Q10 is a naturally occurring nutrient within the body. It mainly acts as an antioxidant, protecting cells from damage, and has a vital role in your body’s metabolism.

While this might sound pretty amazing, a typical effective daily dose is between 100 to 200mg of CoQ10 daily.

Given that the lab results for Bang came back with a CoQ10 content of only 63.86mg per can, we can’t say for sure whether the CoQ10 in Bang Energy actually will have any significant benefit for you.

While present, Bang doesn’t have quite as many B-Vitamins as some other energy drinks. That said, given how some energy drinks go pretty overboard with it, you might find the B-Vitamin content in Bang to be very reasonable.

The table below should give you an indication of what each B-Vitamin in Bang does, and check the link here if you want further info.

Is Bang Energy Drink Bad For You?

As long as you have Bang in moderation and are relatively healthy, a can of Bang shouldn’t really do you any harm.

Like all caffeinated beverages, the key to getting the best out of Bang is enjoying it in moderation. Just like how you shouldn’t be having too many cups of coffee in a day, doing the same with Bang is also a pretty bad idea.

Of course, given the high caffeine content, Bang Energy isn’t for everyone, especially if you happen to be caffeine-sensitive.

For a more detailed analysis, check out my other article where I cover absolutely everything you might want to know about whether Bang Energy Drink is bad for you.

Bang Energy is definitely healthier than many other energy drinks out there on the market, given its zero-calorie, sugar-free nature.

Strictly speaking, the healthiest drink available to you is always going to be good old water. But in terms of energy drinks, Bang is as good as it gets from a calorie-perspective.

Though the high caffeine content is a bit worrisome, especially if you’re not used to highly caffeinated energy drinks. It will definitely give you a strong boost in a pinch, but all that caffeine might prove too much for some people.

If you want to know how to select a healthy energy drink, take a look at the video below:

How Many Bang Energy Drinks Can You Have A Day?

I personally recommend that you have no more than one can of Bang Energy Drink per day, owing to the high caffeine content.

While you don’t need to worry too much about sugar or calories, Bang Energy does have a staggering 300mg of caffeine, which is only 100mg short of the FDA’s max daily caffeine cutoff limit.

Any more than 400mg of caffeine, and you might start experiencing some heavy side effects.

So definitely don’t have two cans of Bang Energy drink in a day, and try not to combine Bang Energy with other caffeinated products such as coffee, tea, or sodas as that will add to your daily caffeine intake.

To conclude, be aware of your caffeine intake, consume Bang responsibly, and don’t go too overboard with the energy drinks, even if you think you really need them.

Stick to a single can of Bang Energy per day and you’ll be just fine.

Bang has a total of 24 flavors, and here’s a selection below to give you an idea of just how varied the flavors are:

If you want to add some variety to your energy drinks, take a look at the list below for some ready-to-drink canned energy drinks that are similar to Bang:

There are also some awesome powdered options such as:

I generally prefer powdered energy drinks over the ready-to-drink variety because they are more convenient, more versatile in terms of how you can mix them and they’re also usually a lot more affordable too.

If you’re not too fond of Bang’s crazy-high caffeine content, how about trying REIZE instead?

REIZE is a convenient powdered energy drink that comes in a 4g sachet. With a sensible 50mg of caffeine, REIZE is completely sugar-free, with just 11 calories per drink.

REIZE also contains a smart blend of beneficial ingredients such as taurine, ginseng, and B-group vitamins, which help to give you the perfect energy boost without the crash afterward.

The best part? You can get REIZE shipped right to your door for only about $1 per drink,

That’s amazing value for money, and definitely worth trying out.

Try REIZE today and I’m sure you’ll agree that it’s a smarter option than Bang.