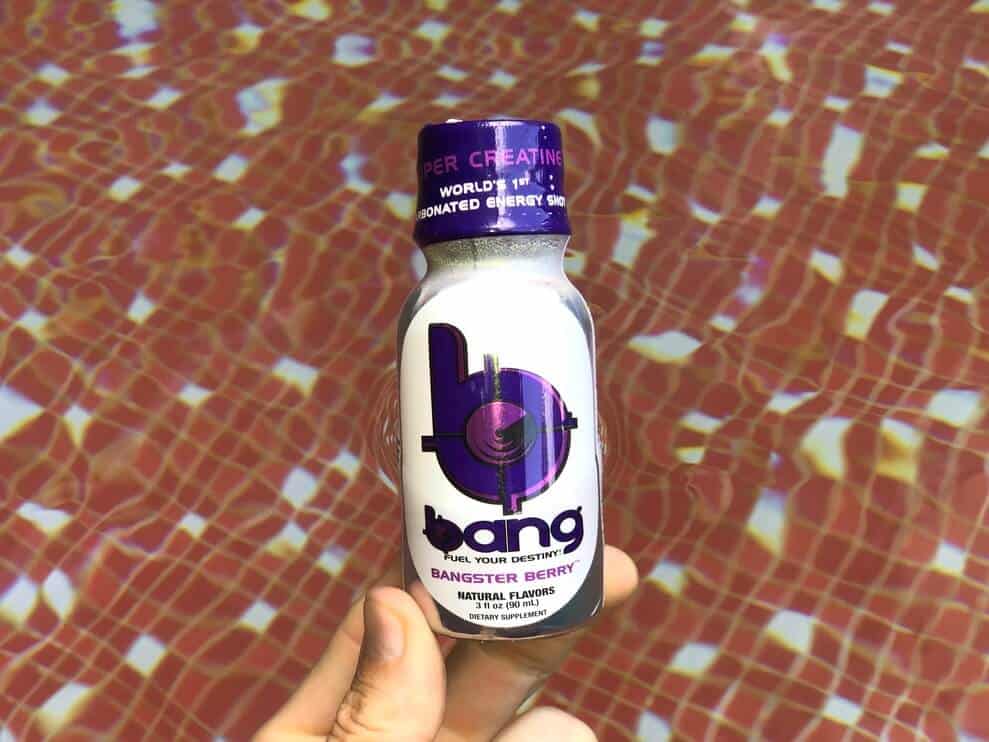 Advertised as ‘Bang Energy Drink in a smaller package’, Bang Energy Shots is almost everything you can get from the original Bang, with the same caffeine content and signature ingredients, all in a much smaller package.

Here’s the quick answer: If you don’t have any medical problems and aren’t having one shot after another, Bang Energy Shots aren’t all that bad, especially if consumed in moderation.

It also has 1,878mg of a proprietary blend of these ingredients:

I’ve written a comprehensive article on the ingredients in Bang Energy Shots that you may find informative, so feel free to check it out here for more details on the above.

First of all, take a look at the nutritional value that Bang Energy Shots have, all in an easy-to-read table:

How Many Calories Are In Bang Energy Shots?

There aren’t many calories in Bang Energy Shots thanks to the absence of regular sugar, thus it shouldn’t affect your overall diet if you’re worried about that.

That said, energy drinks aren’t replacements for a good hearty meal, so if you want to maintain or maximize your exercise performance, make sure you have a proper meal afterward too.

Though, if you find that 6 calories are still too much, you can read my article on the best zero-calorie energy drinks, which you’ll find helpful.

How Much Caffeine Is In Bang Energy Shots?

Each 3 fl.oz shot of Bang Energy Shots contain 300mg of caffeine, which is quite a lot considering the size of the drink.

The FDA recommends that healthy adults should limit their caffeine intake to no more than 400mg per day.  Too much caffeine in a short time may induce side effects like:

Personally, my caffeine preference is somewhere between 50mg – 100mg per drink, thus I find the caffeine content in Bang Energy Shots to be way over my personal limit.

Bang Energy Shots also have a fairly small volume, which means you’ll most likely down it all in one go. This may cause you to consume more caffeine than usual in a very short time period with Bang Energy Shots as opposed to canned energy drinks which generally take a little longer to drink.

If you’re caffeine-sensitive or have a low caffeine tolerance, you should probably stick to lower-caffeine energy drinks.

Of course, your caffeine metabolism is the deciding factor on whether you’ll experience severe side effects after drinking 300mg of caffeine or not. If you have a pretty fast caffeine metabolism, Bang Energy Shot is a convenient option for a quick energy boost.

Since Bang Energy Shots contain 300mg of caffeine per bottle, you really shouldn’t have more than one serving in a day.

Do Bang Energy Shots Have Sugar?

Bang Energy Shots don’t have regular sugar, but the drink does contain sugar alcohols, which happen to be a type of sweet carbohydrate.

Sugar alcohols are a popular sweetener since they contain fewer calories than regular sugar and cause fewer spikes in your blood sugar levels.

Due to this, sugar alcohols are great alternatives to sugar for diabetics.

However, excessive consumption of sugar alcohols in a short period of time can lead to digestive issues like gas, diarrhea, and bloating.

Since sugar alcohol is a type of sweetener, you might not get the usual rush of dopamine that’s typically associated with sugary energy drinks, but the bright side is you won’t be consuming as many calories and there’s a smaller risk of health problems in the future too.

Are There Artificial Sweeteners In Bang Energy Shots?

Aside from sugar alcohols, Bang Energy Shots also contain sucralose, which is an artificial sweetener.

Since sucralose contains zero calories, it won’t affect your calorie intake while still providing Bang Energy Shots with a sweet and satisfying taste.

Artificial sweeteners like sucralose are less likely to be detrimental to your dental health and cause a sugar crash.

Sucralose is safe for use and consumption as it has been approved by the FDA along with other non-nutritive sweeteners you’ll find in other foods and drinks.

That said, you shouldn’t consume sucralose or other sweeteners in excess. Studies have yet to come to a conclusion, but artificial sweeteners have quite a controversial reputation that may lead to future health problems.

As long as you don’t include sucralose in every meal and consume it in moderation, you don’t have to worry too much about that.

To learn more artificial sweeteners and the possible effects that they may have on you, check out this video:

Super Creatine is a trademarked ingredient of Bang and is labeled as Creatyl-L-Leucine (creatine bonded to L-Leucine) on the back of the package. L-leucine is an amino acid and it makes up the Branched-Chain Amino Acids (BCAAs).

Creatine is naturally produced in your muscle cells as it supplies energy to the muscles when you’re doing activities that require heavy lifting or are high in intensity.

Super Creatine is claimed to be a water-soluble form of creatine. There are many ongoing lawsuits and controversies surrounding the legality of this ingredient though.

Personally, I don’t yet believe that it’s an effective ingredient and think that it’s mostly just marketing fluff. But I suppose there’s no harm trying it out for yourself and doing your own research on it.

Whether coffee or Bang Energy Shots is better depends on your taste, caffeine tolerance, and what you’re looking for from drinking them.

Both coffee and energy drinks can provide you with an energy boost that makes you more alert and awake.

In my opinion, the preference of coffee or energy drinks really comes down to your personal taste and what you’re looking for from caffeinated beverages, as both have pros and cons.

A cup of coffee has about 95mg of caffeine on average, although the caffeine content for coffee can vary according to the type of coffee that’s brewed, thus it can range from between 0mg – 500mg per serving.

One of the perks of Bang Energy Shot is that you have a very precise idea of how much caffeine you’re consuming in each serving, so it’s easier for you to keep track of your caffeine intake compared to if you were drinking coffee.

But, coffee does have the advantage of containing antioxidants that could lower the risk of certain diseases. Plus, unlike Bang Energy Shots, you get to enjoy the taste of coffee for longer – if you like the taste that is.

If you like something quick and convenient, Bang Energy Shots have got you covered, on the other hand, if you’re in the mood for something relaxing and warm, coffee is probably a perfect fit for what you’re looking for.

If you’d like to learn more about how coffee is different from energy drinks and how they each might benefit you, head over to this article I’ve written where I cover things in a lot more detail than I have here.

Are Bang Energy Shots Bad For You?

A shot of Bang Energy Shot isn’t going to be bad for you or cause any issues provided that you’re drinking them in moderation and don’t have any pre-existing medical conditions.

Just like everything we eat and drink, moderation is key.

Even drinking too much Starbucks in a day can lead to several adverse effects that’ll leave you feeling restless and sick. The same is true with Bang Energy Shots.

But, if you don’t go overboard with Bang Energy Shots and only consume them when you truly need some extra energy, a Bang Energy Shot is a quick and convenient beverage that’ll provide you with a strong boost.

In summary, Bang Energy Shots aren’t bad for you if you’re a healthy adult and drink them in moderation.

Drinking Bang Energy Shots may be accompanied by side effects like irritability, nervousness, sleeplessness (insomnia), and rapid heartbeat. This is mostly due to its large amount of caffeine, which may not be suitable for everyone.

This might lead you to consume too much caffeine which might cause several serious side effects if you’re not careful with how much you have.

Women who’re pregnant or breastfeeding and those who have medical conditions are also not advised to consume Bang Energy Shots. If you’re unsure about whether Bang Energy Shots will have any negative impacts on your health, you should consult your doctor first.

Moreover, you should avoid having other caffeinated foods and drinks together with Bang Energy Shots, as that would put you super close to the maximum daily caffeine limit which is 400mg.

Bang Energy Shots work very well thanks to their high caffeine content, but if you prefer something on the lower end of the caffeine scale, here are some other great options that might interest you:

Want a lighter energy drink that won’t leave you feeling too jittery?

How about trying REIZE instead?

REIZE is a powdered energy drink that comes in convenient 4g sachets which makes it really easy to take anywhere you might need an energy boost.

With a sensible 50mg of caffeine, REIZE is also sugar-free and has only 11 calories per drink.

Plus, REIZE also contains a smart blend of ingredients like taurine, ginseng, and B vitamins that work together to provide you with the perfect energy boost, with no crash afterward.

You can get REIZE shipped right to your door for only about $1 per drink, shipping included.

Give REIZE a try and I’m sure you’ll soon agree that REIZE is a smarter choice than Bang Shots.

Continue Reading
link to Which Energy Drink Has The Most Energy? (lift off)

Alright, let's cut to the chase. You badly need an energy drink to get you through your morning workout or late-night cramming session, but which energy drink is going to give you the most energy to...