How Many Red Bulls Can You Have a Day? (Answered) 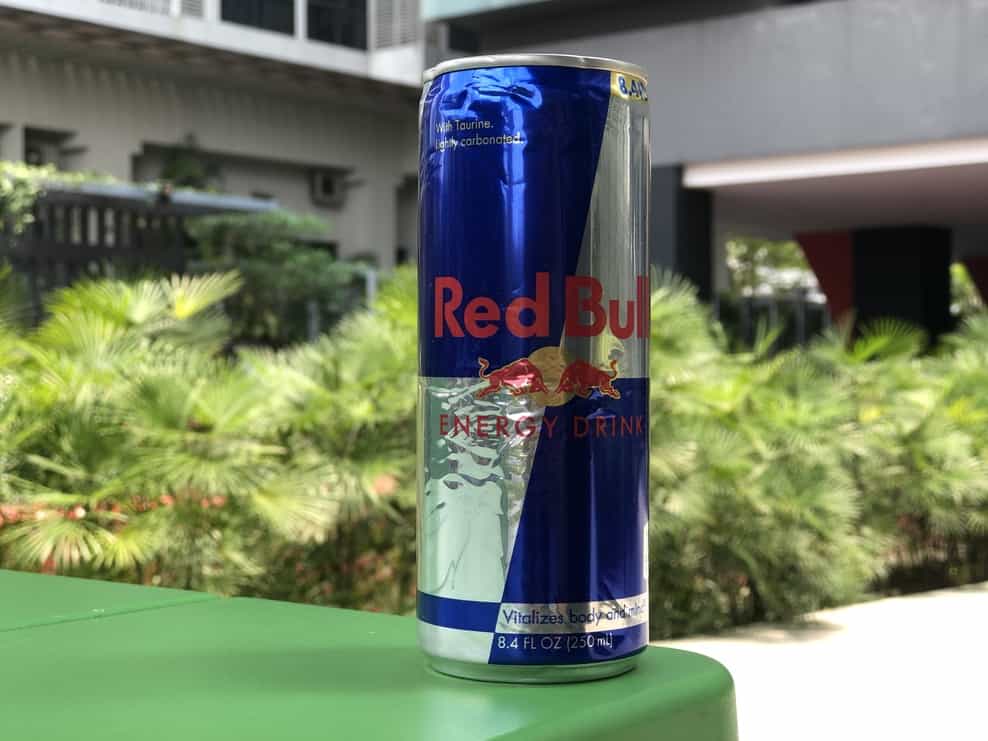 Who doesn’t like a good Red Bull every now and then?

It’s one of the most recognizable energy drinks on the market, and true to its slogan gives you the wings you need to get the job done.

But how many Red Bulls can you have a day before you find yourself experiencing that dreaded energy drink crash?

If you just want a quick answer, I would personally recommend you only have one 8.4 fl.oz can of Red Bull a day for the most optimum effects, and have it either before a workout or fairly early in the afternoon.

If you’re here for a more detailed discussion, read on to find out all the info you need about Red Bull—from its sugar and caffeine content to discussing whether it’s better or worse than coffee.

Fun fact before we get started: Did you know that Red Bull was banned in France for a period of time?

Here’s everything on the back of a Red Bull label condensed into an easy to read table:

Though 110 calories per can may sound like a lot, it’s actually only half the amount of calories contained in a regular can of Monster Energy.

As a reminder, the daily recommended caloric intake for healthy adults ranges between 2000 to 2400 calories for women and 2400 to 3000 calories for men.

Note that the commonly advertised 8.4 fl.oz Red Bull can is half the size of your regular 16 fl.oz energy drink can. Per fluid ounce, Red Bull actually does come rather close to the caloric content of a Monster.

Out of the more popular sugar-containing energy drinks, Rockstar has the lowest calorie count (122 calories per 16 fl.oz can of Rockstar).

If you’re looking for efficiency, however, Red Bull is right up your alley.

Its smaller size and relatively high calories mean you can get to its energy-boosting effects sooner rather than later, which is pretty convenient especially if you’re short on time.

On the other hand, Red Bull probably isn’t great at helping you lose weight due to the high sugar and calories, so if you’re looking for a way to lose fat, check out my article on the best energy drinks to burn fat.

By the way, you might be wondering how the above ingredients list sets Red Bull apart from other brands, such as Monster. If you would like to see a comprehensive breakdown of the similarities and differences between Red Bull and Monster, check out my other article.

Sugar is an easy source of energy that is found in many energy drinks and soft drinks, giving you a dopamine hit and a quick energy boost to get you going before the caffeine kicks in.

With many energy drinks moving towards producing less sugar or sugar-free products for health purposes, Red Bull’s sugar content might seem a bit high, but you can’t deny that it works.

Be warned though, the AHA sets a recommendation of a daily sugar limit of 25g and 36g of sugar for women and men respectively.

Red Bull is just barely over the limit for women and is almost 3/4 of the recommended maximum amount for men.

While the short-term effects of high sugar consumption might seem bad enough, such as the dreaded sugar crash (feeling tired and lethargic), long-term overconsumption of sugar may lead to worse health risks such as:

So keep in mind how much added sugar a day you’re having, and try to keep your consumption of Red Bull a day down to a minimum.

If you’re someone who’s worried about sugar in energy drinks. I’ve written an article on a bunch of sugar-free options for you to try out, so feel free to take a look.

For comparison, your average cup of coffee contains about 95mg of caffeine per serving. So a can of Red Bull might serve as a decent replacement if you don’t mind the extra sugar.

I personally prefer to have between 50 to 100mg of caffeine per serving in my energy drinks so as to not get too overwhelmed by the effects of caffeine.

So a can of Red Bull is just the right amount to keep me going.

However, whether or not Red Bull will work for you can also depend on your caffeine metabolism and how quickly caffeine acts on your system.

You can certainly up the caffeine count with more cans of Red Bull, but keep in mind that the FDA advises a maximum caffeine intake limit of 400mg per day.

Any more than that and you might experience some serious side effects, such as:

If you start experiencing any of the above, even if you haven’t hit the 400mg max limit, it’s probably time to put down that can of Red Bull.

For further information on caffeine overdose and how it might affect you, I’ve written an article on that very subject, so give it a read if you want to learn more.

There is 1000mg of Taurine in every 8.4 fl.oz can of Red Bull. The Taurine in Red Bull is synthetically made and not derived from animal products.

Taurine is found in many energy drinks and can provide a multitude of benefits, most notably helping in support of nerve growth and lowering blood pressure.

Taurine also improves cognitive performance, but some research suggests that the results aren’t really consistent and that caffeine plays a much stronger role in this aspect.

Being a concern for vegans especially, Red Bull’s taurine content has been the subject of many rumors over the years.

Fortunately, the taurine found in Red Bull is synthetically made and doesn’t contain any animal products.

B-Vitamins are one of the many nutrients you can find in a Red Bull can and is a core part of any energy drink.

But if you want to know their functions and amount, take a look at the table down below.

Is Red Bull Worse than Coffee?

With roughly the same amount of caffeine, sugar content, and volume, Red Bull is no better or worse than a single cup of coffee.

Coffee is one of the most popular drinks in the world and has probably served you pretty well as a caffeine fix in the past.

Coffee also comes with a bunch of antioxidants and is almost calorie-free (unless you start adding things like whipped cream, caramel, or sugar, in which case your coffee might equal or even exceed the calories and sugar contained in a can of Red Bull).

Red Bull however, packs a bunch of B-Vitamins which coffee doesn’t.

To conclude, it’s not really a ‘which is better’ scenario, but more of a question of personal preference. It all ultimately depends on if you like a good roast, or a can of energy drink to get you going.

Taste is also an important factor.

Personally, I drink both fairly regularly, but if given the choice, I’ll usually go for the energy drink.

How Many Red Bulls Can I Have A Day?

Personally, I think the optimal number of Red Bulls you can have is one 8.4 fl.oz can a day. Any more and you might experience the effects of sugar and, those of excessive caffeine consumption.

While you could stretch that number to 2 or 3 cans a day, if you absolutely must, it will definitely put you over the sugar limit.

On the caffeine side of things, you have a bit of leeway before you reach the 400mg caffeine limit, but with that said, you should still take note of your intake to prevent going over the limit.

Remember that other food and drink products also contain caffeine. Coffee, tea, sodas, even chocolate have caffeine hiding in them in varying quantities.

To help illustrate what would happen if you go over the daily approved limit and consume more Red Bull that recommended, here’s a short video below detailing just that.

Known as editions, Red Bull actually does come in a wide variety of flavors, the more notable ones are as follows:

While the Original Red Bull might be an energy drink classic, there’s nothing wrong with trying something new. So give these flavors a shot and who knows, you might actually prefer them.

Looking for something other than Red Bull for your energy drink needs?

If you’re a fan of variety, here’s some awesome energy drink brands to get you started.

On the other hand, if you prefer powdered energy drinks, these might be more your style:

Looking for an energy drink that can compete head to head with Red Bull?

REIZE is a delicious powdered energy drink that comes in a 4g sachet. Each sachet contains a sensible 50mg of caffeine, is sugar-free with only 11 calories per serving.

REIZE also contains many beneficial ingredients such as taurine, ginseng, and B-group vitamins. This smart mix helps to give you the energy boost you need without the dreaded crash.

Try REIZE today, and I’m sure you’ll find that it’s a smarter choice than Red Bull.