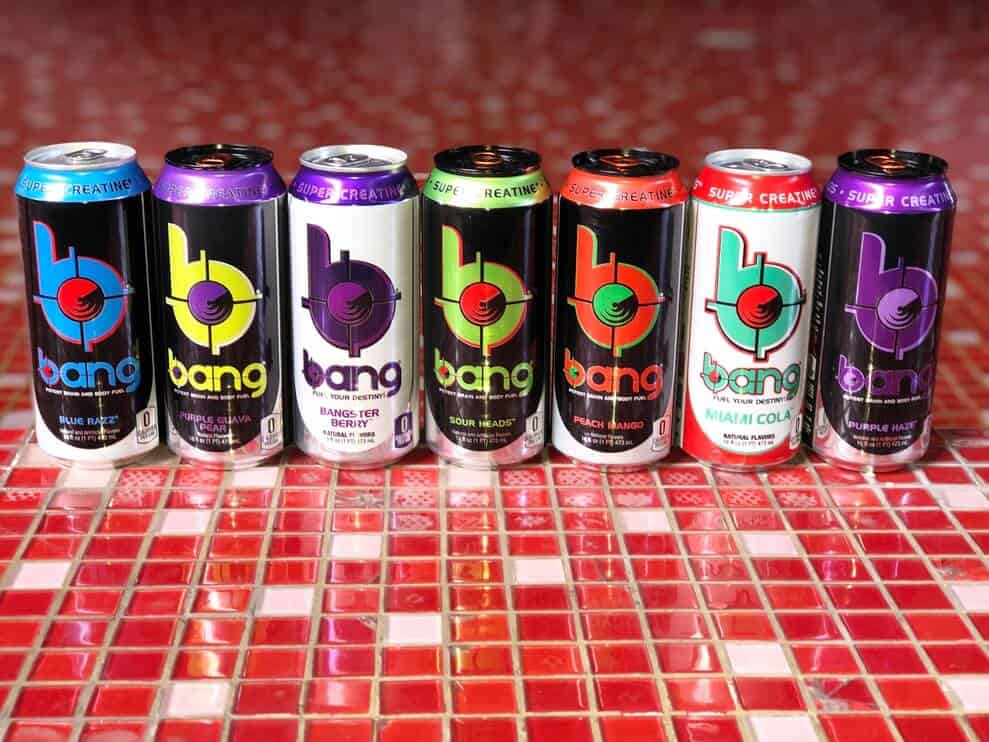 I think everyone is familiar with Bang energy drinks. This brand of energy drink is pretty popular in the market and can be spotted anywhere with its colorful packaging and notable tagline, ‘Potent Brain and Body Fuel’.

Bang is advertised to not only boost exercise performance but also improve brain functions.

As much as I enjoy Bang, I’m doubtful whether creatine is actually present in Bang energy drinks. Which is why I’ve scoured the internet searching for available and legitimate information about the content of creatine in Bang.

I hate to break it to you but creatine in itself isn’t listed in Bang’s ingredients but Super Creatine, on the other hand, is.

What are in Bang Energy Drinks?

You see, a 16 fl.oz can of Bang energy drink contains the following:

It also contains traces of:

You’d go dizzy just looking at this list trying to understand what these ingredients are unless you’re working in the Chemical field.

Lucky for you I’ve covered some of Bang’s main ingredients and its functions so feel free to check that article out to learn more.

The ingredient we’ll be putting the most focus on in this article is “Super Creatine”, also labeled as Creatyl-L-Leucine.

From the nutritional labels available on a can of Bang, you’ll find that Super Creatine is always listed as one of its ingredients.

What is Super Creatine?

Super Creatine is marketed as creatine that has been bonded to L-Leucine, a type of amino acid that is essential in building proteins in your body.

To understand what Super Creatine is, we’ll have to get to know what creatine is.

is produced naturally in your muscle cells. When you’re doing any heavy-lifting or high-intensity exercises, your muscles will produce creatine to provide you with the energy to carry out those actions.

Creatine is a popular supplement among athletes and bodybuilders as it helps them gain more muscle, improve their exercise performance, and boost their physical strength.

Studies have shown that creatine supplementation could improve physical

performance by 10% – 15%, especially in high-intensity exercises.

during training improved physical strength by 5% – 15%.

VPX, Bang’s creator, promoted their Super Creatine as the ‘only world’s water-stable creatine’. As Super Creatine is supposedly water-soluble, it can easily cross the blood-brain barrier and enhance mental focus.

Though, I’m doubtful Bang makes great brain fuel, especially when you’re not sure of the amount of Super Creatine Bang energy drinks contain. Creatine supplements can bring benefits to your body if you take them in specific amounts.

How much Super Creatine is in a can of Bang?

The amount of Super Creatine in Bang isn’t indicated on the nutrition labels therefore it’s unclear how much of it is present. I’ve even sent a couple of Bang energy drinks to be tested in the lab.

Since creatine is able to enhance your progress in your training and workouts, it makes sense that most energy drinks could contain small amounts of it.

If I’m not mistaken, VPX has once claimed that Super Creatine will break down into creatine once ingested.

Like regular creatine, I believe Super Creatine is supposed to improve your performance in the gym, increase the speed of muscle recovery during and after exercise, and enhance your concentration during exercises.

VPX has even commissioned two studies to investigate the effects of Super Creatine on rodents. The results seemingly showed that Super Creatine had positive effects on the test subjects. The strange thing is that I’ve dug through internet sources for these two studies and yet still haven’t been able to find them.

I suspect that they were deleted a long time ago, especially after the lawsuits and allegations were filed against VPX.

Does Super Creatine have any benefits?

I’ve done some searching of my own and found that Super Creatine does have some benefits when it’s consumed before and after exercises.

It seems that taking creatine and Super Creatine together compensates for the loss of creatine from your body and benefits you in terms of providing more energy during workouts.

Just keep in mind that the statements made have not been evaluated by the FDA, so if I were you I’d take the claims with a grain of salt.

In my opinion, Super Creatine isn’t a legitimate supplement. I believe it’s all marketing fluff or at least, a somewhat attempt to make it seem like a new beneficial ingredient.

I might have to believe that these claims may carry some weight. After all, I haven’t found much information about Super Creatine so far.

In 2018, Thermolife International, LLC, a sports nutrition and supplement manufacturer, filed a lawsuit

against Vital Pharmaceuticals, Inc, (“VPX”), the owner of the Bang energy drink line.

In Thermolife’s complaint, Super Creatine is described to be falsely advertised, as it was not really a bioavailable form of creatine at all. It was explained that the compound of creatine found in Bang energy drinks was a covalently bonded creatine dipeptide.

As for what creatine dipeptide is, if I’m not wrong, it’s just another term for creatyl-L-leucine. It’s a synthetic chemical formed by a covalent bond between creatine and L-leucine amino acids. You can read more about it here

Thermolife International, LLC added that Super Creatine doesn’t change into creatine once it’s consumed and instead turns into creatinine, a waste product muscles produce after the breakdown of creatine.

Is creatinine harmful to your body?

range (0.84 to 1.21 milligrams per deciliter), creatinine isn’t harmful to the body. As creatinine is produced by your muscles, it’s usually transported by your bloodstream to the kidneys, where it’ll be filtered out of the body.

As long as your kidneys are healthy, eliminating creatinine from your body shouldn’t be a problem.

The good news is that there are ways to lower your creatinine levels. An article from Healthline

Do Bang energy drinks have any benefits?

In my opinion, Bang could be beneficial to you if consumed in moderation. Bang does contain 300mg of caffeine (which places it as one of the strongest energy drinks in the market) and BCAAs, amino acids that your body needs to make proteins.

For me, I can’t handle more than around 100mg in a single dose. So by half a can in, I’m already experiencing some of the side effects of too much caffeine.

For those with a higher caffeine tolerance and looking for a stronger kick in their energy drinks, Bang might be the drink for you.

Though I wouldn’t recommend drinking more than one can of Bang a day.

Is caffeine good for you?

, when ingested in moderation, can boost energy levels and prevent fatigue. Cognitive functions, including memory and mood, are also improved after the consumption of caffeine.

However, the amount of caffeine in one can of Bang isn’t far off the maximum recommended daily caffeine limit of 400mg

. If you exceed this amount, you might be in for some nasty side effects

What is BCAA in energy drinks?

With regards to BCAAs, the term refers to branched-chain amino acids. BCAAs are often used as supplements among novice athletes. The amino acids you’ll usually find in energy drinks are leucine, isoleucine, and valine.

When consumed as supplements, BCAAs can prevent

muscle wasting, reduce exercise fatigue, boost muscle growth, and improve muscle recovery after workouts. However, the amount of BCAAs in Bang energy drinks seem to be quite small and would probably have only minimal effects.

Personally, if I really needed BCAA in my diet, I’d supplement them myself using other means instead of depending on drinking Bang for a sufficient supply of BCAA.

Don’t get me wrong, I’m a fan of Bang and that’s one of the reasons why I’ve searched through page after page on Google for information about Bang’s much-publicized Super Creatine content.

In my opinion, even if Super Creatine is indeed present in Bang energy drinks, I’m not certain the amount is significant enough to actually give you the desired outcome.

If you’re interested to read more about Bang, you can check out my previous articles about whether Bang is good or bad for you, whether or not Bang works and if you can drink Bang every day.

There’s a ton of great energy drinks on the market that are just as good or even better than Bang in my view.

For instance, you can check out:

Or, if you prefer powdered energy drinks, take a look at some of these awesome brands:

REIZE is the absolute perfect pick for a great energy boost!

REIZE comes in a cool sachet that fits conveniently in your pocket. You can mix REIZE with almost any beverage of your choice – soda, juice, water, you name it!

With 50mg of caffeine, REIZE contains a much reasonable dose of caffeine than most other energy drinks, including Bang. REIZE also contains a bunch of other great ingredients like taurine, ginseng, and B vitamins.

Did I mention REIZE is also sugar-free?

Well it is! REIZE is great option as it won’t give you the dreaded sugar crash.

REIZE ships straight to your door at only around $1 per drink, a more affordable choice than most energy drinks on the market.

Try REIZE today, and I’m sure you’ll agree with me that it’s even better than Bang.

Low carb diets are popular for a few good reasons: they not only help in weight loss but also lower the risk of health issues like heart disease and diabetes. Perhaps you're...