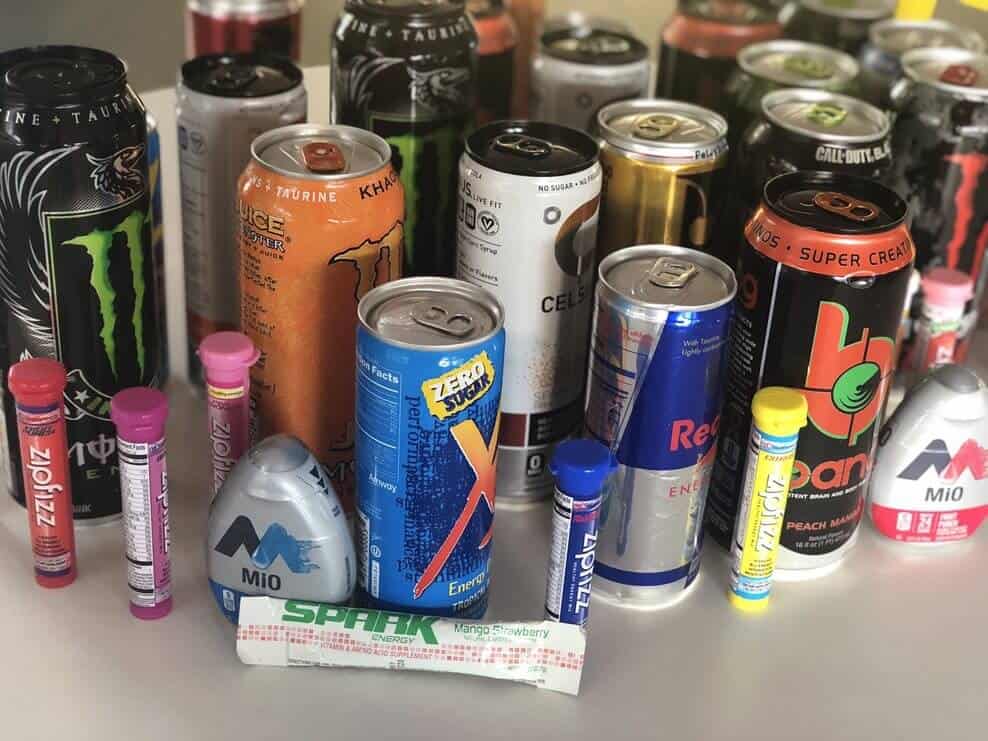 Curious about how bad energy drinks are for you?

You’ve probably heard horror stories about death, kidney failure and diabetes, but honestly, all those are only a possibility if you consume energy drinks in excess.

In this article, I break down the top energy drink dangers and what causes them.

Although getting a lot of vitamins may seem like a good thing, this isn’t necessarily the case.

That means that you’re getting far more vitamins than you actually need, which may actually not be beneficial to you at all – especially when the vitamins are combined with caffeine, the effects are uncertain.

According to this study, patients with bipolar disorders were more likely to display symptoms or relapse while drinking energy drinks. This is because of the ‘up and down’ effect that caffeine has on the body.

The connection between energy drinks and mood disorders is unfortunately not a positive one, so if you suffer from depression, bipolar disorder or schizophrenia, consult your doctor before taking energy drinks and be aware of the risks.

The caffeine in energy drinks is basically a drug – that means you will be able to get addicted to it.

A classic sign of addiction is when you feel like you need the energy drink in order to “feel normal”. When you don’t get your required fix, that means you have withdrawal symptoms, like shivering, sleepiness, or headaches.

It may seem like you have a low chance of being addicted to energy drinks, but in actual fact, the more you drink it, the more likely it is that an addiction will develop.

An overdose of caffeine can produce the following side-effects:

If you notice, some of these side-effects are actually similar to energy drink side effects – that means that the caffeine in the energy drinks is actually causing a lot of the potential problems.

At this point it’s worth mentioning that energy drinks are certainly not the only caffeinated beverages that have the potential to cause health issues if abused.

Keep in mind, you’re really only supposed to drink a maximum of 400mg of caffeine per day. Check out my other article which lists some of the most highly-caffeinated energy drinks in the world.

This isn’t as common a problem with the sugar-free and low calorie drinks, but some energy drinks can contain up to 100 calories, which is a lot!

The sugars – especially simple sugars, can cause your fat cells to grow and multiply at an astonishing rate. If you’ve been gaining a lot of weight recently, take a look at your sugary drink consumption.

This problem is especially serious in children, who put on weight easily if not controlled – but kids and teenagers aren’t supposed to be drinking energy drinks anyway due to the associated dangers for their developing bodies.

This one is pretty self explanatory.

If you’re at risk of getting diabetes or there is a history of it in your family, you should stay away from these energy drinks, and consult your doctor before consuming them.

After drinking an energy drink, it seems natural that your heart rate would increase because it’s giving you more energy, but studies have shown that it also thickens your blood, which makes it harder for it to make its way around the body.

High levels of taurine and caffeine can stop your arteries from dilating properly, which can reduce blood flow to the heart and cause a heart attack.

Irregular heart rhythms and spasms in arteries are also likely.

An overdose of caffeine can trigger an anxiety attack, or make people more nervous and jittery because of the excess and unwanted energy in their system.

This study showed that over a certain amount of time, participants that self reported anxiety attacks, and those that held the gene for panic anxiety were more susceptible to reacting badly to caffeine.

The caffeine in energy drinks may trick our bodies and brains into thinking that we’re awake and alert, but this can have long term consequences on our bodies.

Your brain is unable to rest and recharge properly if you consume caffeine too close to bed time. When the time comes to fall asleep, you might find that you’re actually unable to.

Taking an energy drink can cause you to have warped sleep patterns, and the inability to fall asleep when you need to.

According to some studies, high consumption of energy drinks can lead to increased risky behaviour, especially amongst teens.

Of course, teens shouldn’t even be drinking these energy drinks in the first place, but for those who do, there is a visible correlation between those who drink energy drinks and take drugs, show violent behaviours, or drink alcohol.

This is all circumstantial evidence, but the evidence is growing.

This may be because of a couple of reasons – you might be allergic to some ingredients that you haven’t tried before in an energy drinks, or you might even develop an allergy to these ingredients after being exposed to them.

The allergic reactions might be from ingredients that you haven’t been exposed to before, or from consuming too many vitamins over and above the recommended daily values.

The reactions can include hives and rashes, diarrhea, difficulty breathing or shakiness.

Over the years, it has been suggested that energy drinks can also increase the risks of kidney failure.

Taurine is seen as a potential culprit in this, as accumulation of taurine in the kidneys can have damaging consequences.

As mentioned in my Rip It article, the US Military is scarily dependent on energy drinks to function and be alert during operations, but that also comes with its own side effects.

Energy drinks can exacerbate PTSD symptoms, and can actually make fatigue worse rather than better, especially if the sleep debt is not paid off.

If you frequently drink energy drinks, you might find that suddenly, after stopping, you have really bad migraines and headaches. Those are mostly associated with withdrawal symptoms.

However, too much caffeine can also trigger a headache, as can certain artificial sweeteners and sugars.

If you find these headaches to be recurring, seek a professional opinion on the matter, because maybe energy drinks are no longer the culprit here.

Forgetting all of the sugar that many energy drinks seem to pour into their drinks, the acidity of the drinks themselves is also a problem.

In this article by Colgate, they outline how teeth are eroded by acidity, and thus at a higher risk of decay and cavities occurring.

Of course, sugar is also really bad for your teeth and is a known cause of cavities.

If you still insist on drinking energy drinks, it’s probably best to opt for a sugar free version, or a water flavored drink instead of the regular version, and rinse your mouth with plain water after drinking.

Because energy drinks often contain so much caffeine, you are more likely to want to pee more often, because caffeine is a diuretic.

Diuretics cause the body to lose water, so even though you think you might be filling your body with liquid, it’s actually dehydrating your body even more quickly.

If you feel like you’re thirsty, try picking up a glass of water instead of reaching for another energy drink. Your body and cells will thank you for it.

Some ingredients in the energy drink can irritate the stomach lining, causing massive pain or the feeling like you need to vomit.

Any dizziness or nausea you feel may also be because of a caffeine overdose, or even dehydration. You are really only supposed to consume a maximum of 400mg of caffeine per day, so drinking energy drinks in excess can be a huge problem.

Make sure you stay hydrated and keep an eye on your caffeine consumption to make sure you aren’t going over the daily limit.

The caffeine and vitamins in energy drinks can interfere with the workings of prescription medicines in a lot of ways.

Sometimes, it can make the drugs less effective, or even interact in a lethal way.

Always consult your doctor if you’re on prescription meds before starting to drink a new type of energy drink (or really making any changes to your diet).

The irritation of the stomach lining by energy drinks can also cause ulcers or internal bleeding.

The substances in energy drinks that can cause this irritation are things like acids, or the excess of vitamins flooding into your stomach.

Artificial sugars can also reduce your healthy gut bacteria, which makes you susceptible to stomach aches and pains.

If you know you have a sensitive stomach and are worried about an energy drink’s effects on your body, make sure that you consult your doctor on what needs to be done.

You’ve probably heard of or been scared off by reports about energy drinks and death, but if you look closely enough, a lot of those deaths were associated with serious overdoses on energy drinks or pre-existing health issues.

For example, this man who drank 25 energy drinks within 6 hours nearly died – but come on. Common sense would dictate that’s probably not a good idea. To be fair to energy drinks, drinking the same amount of water can also kill you.

It is extremely, extremely unlikely that you will die from drinking energy drinks, especially if you follow the warnings on the label and talk to your doctor before starting.

Energy drinks can be great and have a lot of benefits if consumed sensibly. In fact, if you drink energy drinks in moderation you may not encounter any of the above risks… ever.

The most important things to keep in mind are:

• Consume energy drinks in moderation, and

However, there are many potential dangers that come from drinking energy drinks. You can reduce some of these risks by opting for sugar-free or lower-caffeine options.

In addition to being sugar-free and containing only 50mg of caffeine per serve, because it’s a powder based energy drink, you can mix it with any beverage you like.

Personally, I love mixing it with regular cold water because I find that it’s not too fizzy and it’s more gentle on my stomach. But, you can mix it with carbonated drinks if you prefer fizz and bubbles.

Give REIZE a try and you may find that it quickly becomes your favorite energy drink too.

link to Best Energy Drink for Training (Ready to go)

The relationship between training and energy drinks is obvious. Whether you're training for a particular sporting event or just want to stay fit and healthy, we could all use a bit of extra...

Work, study, life... sometimes it gets a little too much and you need a quick boost of instant energy from your favorite energy drink. Energy drinks can make a great source of quick energy. But...