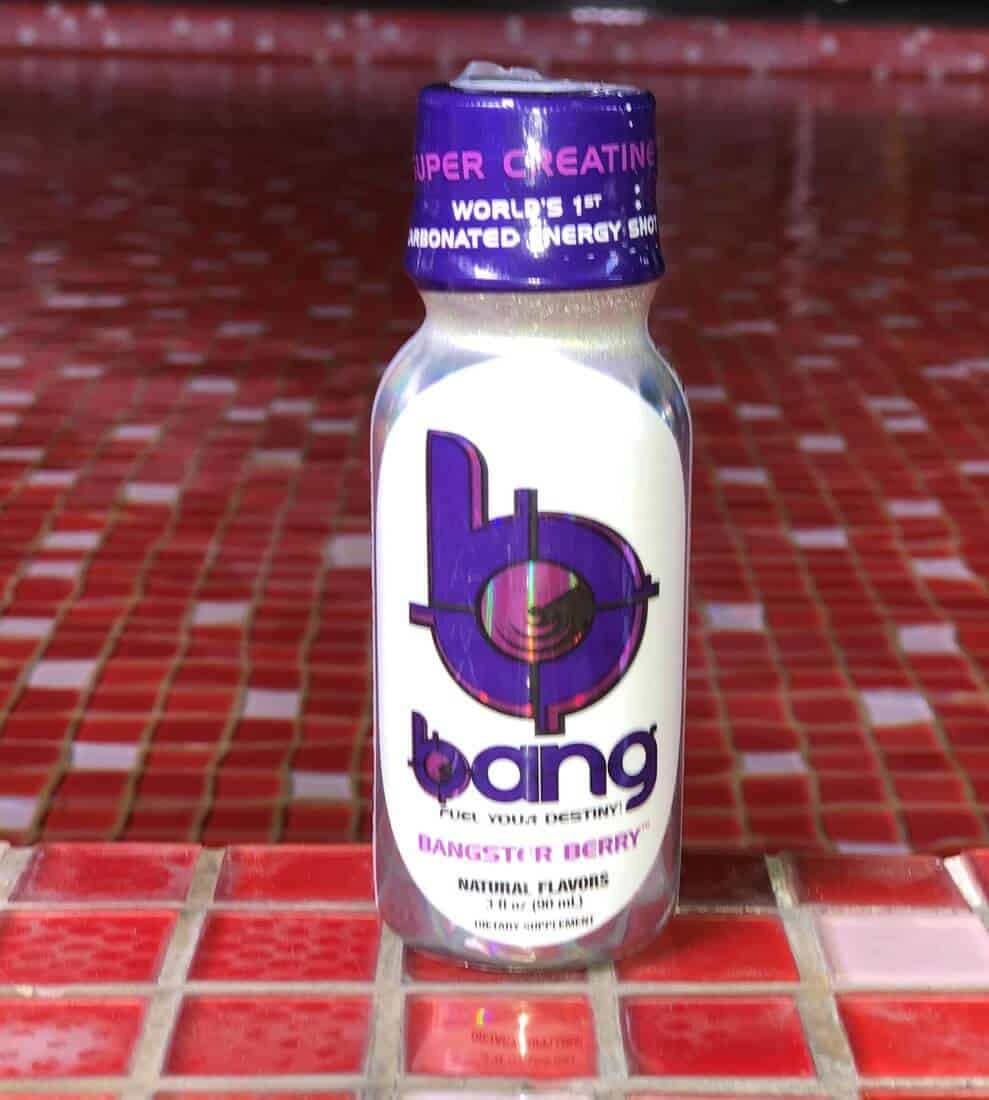 Bang Energy Shots provide an instant boost of energy when you need it but is it vegan-friendly?

The short answer: Bang Energy Shots aren’t entirely vegan-friendly as they may contain animal-derived ingredients, or have ingredients that have been tested on animals.

Read on to get a better understanding of Bang Shots’ dietary information so that you can decide if Bang Energy Shots are suitable for you if you’re a vegan.

First and foremost, let’s go through the nutritional values of single 3 fl.oz bottle of Bang Shots:

Here’s a quick list of the ingredients present in one 3 fl.oz bottle of Bang Energy Shot:

How Much Caffeine Is In Bang Energy Shots?

Each shot of Bang Energy Shots contains a whopping 300mg of caffeine which is a lot for one tiny bottle.

With 300mg, Bang Energy Shots are easily one of the strongest energy drinks in the market. However, Bang Shots are different compared to regular energy drinks due to the smaller liquid volume and high concentration of caffeine.

This means that you’ll feel the effects of the caffeine rather immediately. You may think this is a good thing but it could backfire if you’re not careful.

Caffeine is not only able to boost your alertness and reduce symptoms of fatigue, but it can also improve your physical and mental performance, helping you to be more productive for a long period.

On the other hand, if you’re a veteran caffeine consumer, Bang Energy Shots may turn out alright for you but be sure to limit your intake as well.

Personally, I prefer my energy drinks to contain somewhere between 50 to 100mg of caffeine per serving, which is just the right amount to give me a refreshing boost without the accompanying side effects.

Caffeine must be consumed in moderation. For reference, the FDA recommends a maximum daily caffeine intake of no more than 400mg for healthy adults.

Any more than that, and it may lead to adverse effects like:

Your caffeine metabolism also plays an important role in how your body tolerates caffeine and to what degree you experience the above-mentioned side effects.

It’s best to stick to consuming only one Bang Energy Shot at a time to avoid a caffeine overdose.

For more info on caffeine, check out this video:

Are The Ingredients In Bang Energy Shots Vegan?

I cross-referenced this list of ingredients with PETA’s list of animal-derived ingredients, for comparison purposes. Based on this list, you can see that almost all of Bang Energy Shot’s ingredients are vegan.

However, although most of the ingredients in Bang Shots are synthetic or plant-based, there are a few ingredients with unconfirmed sources and might not be vegan-friendly.

Is The Artificial Sweetener In Bang Energy Shots Vegan?

The artificial sweetener in Bang Energy Shots is vegan-friendly since it’s synthetically made and doesn’t contain any animal products. However, ethical vegans may not consider it vegan-friendly.

Bang Energy Shots contain sucralose, a zero-calorie sweetener that functions to enhance the flavor of foods and drinks.

Sucralose doesn’t cause changes in blood sugar levels, making it a suitable option if you have diabetes. Plus, since sucralose virtually doesn’t contain any calories, it can supposedly help in weight control as well.

Sucralose is considered vegan-free since it isn’t made from or contains animal products or by-products. Also, a coal-based filter is used in place of animal bone char in the production of sucralose so no worries there.

However, what ethical vegans take issue with is the fact that sucralose had been tested on more than 12,000 animals during the making of sucralose. Some of the animals used in the testing were mice, monkeys, and rabbits, of which many have died during the process, a matter that ethical vegans are completely against.

In the end, whether or not you want to consume any sucralose-containing food or beverage depends on what kind of vegan you are and how strict you are with your diet.

If you’re an ethical vegan, you may want to avoid Bang Energy Shots and opt for entirely vegan-friendly alternatives. Though, if you’re a vegan for health purposes, you won’t have any problems with Bang Energy Shots.

It’s safe to assume that Bang Energy Shots is gluten-friendly since traces of barley, rye, and wheat aren’t stated on the label and there aren’t any warnings of Bang Energy Shots containing these ingredients either.

Gluten is typically found in grains, and it contains lots of dietary fiber and nutrients like B vitamins, iron, and magnesium, which are important for our overall digestion and wellbeing.

While some people can consume gluten without encountering any problems, if you have celiac disease or gluten sensitivity, you may develop side effects after consuming any food or beverage containing gluten or traces of gluten.

If you have celiac disease, you have to be more attentive to your diet and cut out all content of gluten.

In the case of Bang Energy Shots, so far it doesn’t seem to contain any trace amounts of gluten-based ingredients, but if you’re still skeptical, you may want to contact the company to verify if they’re indeed gluten-friendly.

Bang Energy Shots is keto-friendly since it contains a small number of calories and carbs and doesn’t contain any added sugar.

An article from Healthline states that you need to limit your carb intake to 20 to 50g per day and fill up on healthy fats like meat, eggs, and fish if you want to enter ketosis.

Since Bang Shots only has 6 calories and 1.4g of carbs, it shouldn’t leave much of an impact if you’re following a keto diet.

However, if you rather do away with calories and carbs completely, check out my article about the best zero-calorie energy drinks, where you’ll find a list of great recommendations.

So if you’re an ethical vegan, you may want to reconsider Bang Shots and look for other vegan-friendly energy drinks. This is because although most of the ingredients in Bang Shots are vegan-friendly, sucralose and glycerine may have been tested on animals thus voiding the whole point of going vegan.

But if you’re only following a vegan diet for health reasons, Bang Energy Shots is fine for consumption.

There are 7 available flavors for Bang Energy Shots:

Bang Energy Shots gives you a super speedy energy boost, but it’s not the most refreshing energy drink out there. If you prefer something to quench your thirst and also vegan, here are a few wonderful options to try out:

While Bang Energy Shots may be more suited for you if you have a high caffeine tolerance, REIZE is an energy drink that’s suitable for everyone.

REIZE is a powdered energy drink that comes in lightweight 4g sachets, which makes it easy and convenient for you to bring anywhere you want.

With a sensible 50mg of caffeine, REIZE is completely sugar-free and has only 11 calories per serving.

REIZE also contains a special blend of ingredients like taurine, ginseng, and B vitamins that work together to supply you with the perfect energy boost – no crash afterward. Plus, all of these ingredients are certified vegan-friendly and gluten-free!

The best part is that REIZE ships straight to your door for only about $1 per drink.

Give REIZE a try, and you might agree that it’s a better vegan-friendly option than Bang Energy Shots.