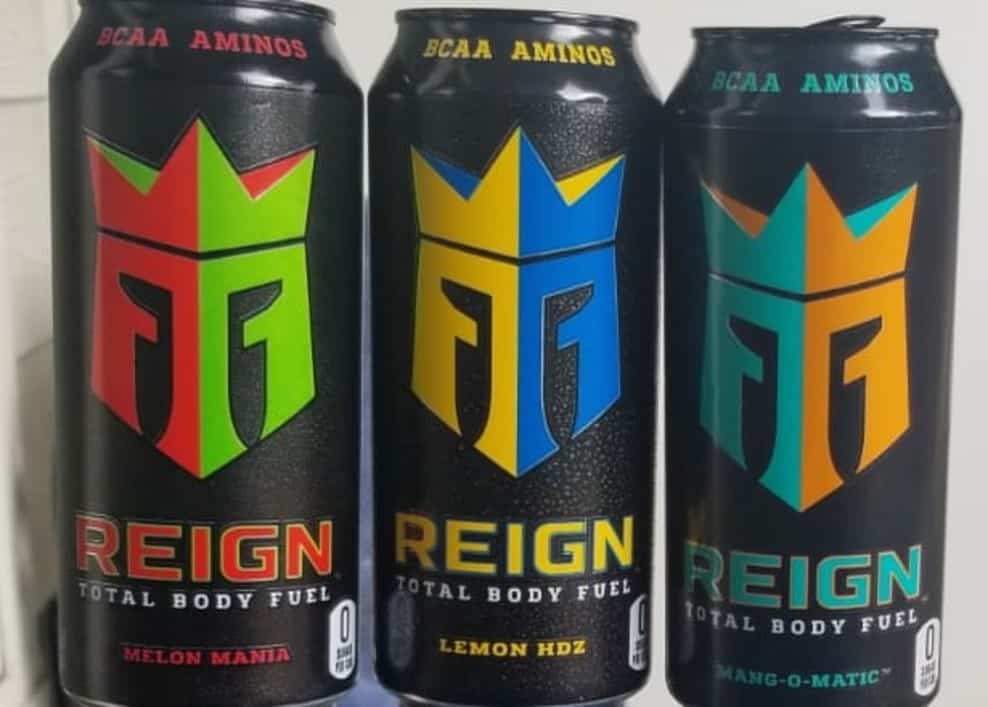 Chock-full of caffeine and other ingredients such as BCAAs and electrolytes, Reign Total Body Fuel is an energy drink series made for the runners and workout enthusiast branch of energy drink consumers.

But is Reign vegan?

In short, Reign energy drinks, while not officially vegan-certified, don’t seem to have any vegan-unfriendly ingredients, with a spokesperson of the company clarifying that Reign doesn’t use any animal by-products.

Read on for a more detailed analysis on how vegan each ingredient in Reign is, whether it’s suitable for your diet, and how much caffeine Reign has.

Unlike most other energy drinks, Reign isn’t quite satisfied with caffeine and some B-Vitamins. They also have some fancier components such as BCAAs (Branch-Chained Amino Acids) and CoQ-10.

I’ve listed below the ingredients in Reign and it’s categorization of whether it’s vegan or not for ease of reference:

I’ve cross-referenced the table above with PETA’s animal-derivative ingredients list, but feel free to run through it incase you want to have a look for yourself.

Reign Energy Drinks are labeled as sugar-free, and thus contain no traditional sugar in each can.

Though the American Heart Association (AHA) recommends a daily added sugar limit of no more than 25g for females and 36g for males respectively.

With Reign having no sugar, you don’t have to worry about its sugar content affecting your overall diet and health.

No sugar also means you don’t have to worry about the possibility of your sugar being processed through bone char, which is a relief if you happen to be an ethical vegan.

While we don’t know everything about artificial sweeteners, they’ve been widely approved for commercial use and shouldn’t be the most worrying part of Reign.

Each 16 fl.oz can of Reign contains 300mg of caffeine.

As per their Amazon page, the caffeine content in Reign is naturally-sourced from green coffee beans and tea leaves, which makes it 100% vegan-friendly.

The FDA does set a recommended daily limit of no more than 400mg of caffeine per day and drinking more than the recommended amount can lead to some serious side effects, such as:

Be aware of Reign’s high caffeine content. At 300mg, it’s one of the strongest caffeinated energy drinks available in the market, and it’s certainly not an energy drink for the caffeine-sensitive.

For reference, I personally prefer to have between 50 to 100mg of caffeine per serving so as to not get too overwhelmed by the side effects of too much caffeine.

But if you crave a bigger buzz or happen to be particularly desensitized to caffeine already, a can of Reign will probably do you just fine.

Just be sure to have Reign in moderation and within the 400mg caffeine limit set by the FDA, so you don’t end up more anxious than active.

A 16 fl.oz can of Reign contains 1000mg of BCAAs, which are essential amino acids not produced by the body and thus needed for a balanced diet.

BCAAs also provide some benefits, including:

As BCAAs can be extracted from plants, it’s safe to assume that the BCAA content in Reign is vegan in nature, but we only have the company’s word on that.

So if you’re an ethical vegan who’s still unsure or skeptical of the source of Reign’s BCAAs, then it might be best to do a bit more research before committing to drinking Reign.

For vegans who are in it for the health benefits, BCAAs are the same no matter the source, so it’s not that big of an issue from a nutrition standpoint.

CoQ-10 is a naturally produced antioxidant that’s suggested to assist in providing energy cells and other benefits, such as preventing migraines.

As a vegan, you’ll probably already be getting enough CoQ-10 through a varied, plant-based diet, so its presence in Reign might be somewhat redundant though beneficial nonetheless.

B–Vitamins are also present in Reign and do quite a number of things, from releasing energy from carbs and fats to aiding in oxygen and energy transport. If you’re interested, you can read more about B-Vitamins here.

The B-Vitamins found in Reign are synthetic, so it shouldn’t be a source of worry even if you follow a strict vegan diet.

There seem to be no traces of barley, wheat, or whey products printed on the can, so it’s probably safe to assume that Reign Energy Drinks are gluten-free.

Gluten is a protein found in most grains, but it’s mainly barley, wheat, and whey that certain people have a sensitivity towards.

If you happen to have celiac disease, a gluten-free diet is necessary for managing the symptoms of said disease.

A gluten-free diet is also proposed to have health benefits for the general population, but research has so far proven inconclusive on that front.

In any case, Reign energy drinks shouldn’t have any ingredients that might trigger celiac disease, but I would always recommend that you consult a health specialist if you’re not sure.

For more information on gluten-free diets, Mayo Clinic has a detailed webpage regarding the subject here.

Is Reign Suitable for a Keto Diet?

As Reign is sugar-free and doesn’t seem to have any complex carbohydrates, Reign energy drinks should be compatible with your standard keto diet.

Keto Diet is a low-carb, high-fat diet which can provide health benefits such as weight loss and general health improvements.

If you’re on the Keto Diet, you would probably veer away from or reduce your carbohydrate intake. As Reign doesn’t seem to have any sugars or complex carbs, it should be perfectly fine to have Reign.

Remember, not all energy drinks are suitable for a keto diet due to their high sugar content, so if you’re looking for some energy drinks that are keto-friendly, I’ve written a complete guide that you might find interesting.

How Does Reign Energy Drink Affect My Health?

As long as you live a healthy lifestyle, have no pre-existing condition, having a can of Reign every now and then will not negatively impact your health.

If you happen to be a vegan for the health benefits, you’ll be pleased to know that Reign’s low-calorie count and lack of sugar means that you can still crack one open and not have it affect your diet.

Still, try and stick with one can of Reign a day so that you don’t exceed the FDA’s daily caffeine limit.

Even if Reign is sugar-free, too much caffeine in your system isn’t great for your health, possibly even leading to dependency later on.

Now, if you want to know what happens if you only drink energy drinks and don’t adhere to the daily recommended limits, this video below should give you a rough idea of what could happen:

Can I drink Reign if I’m Vegan?

From what I’ve gathered, while Reign isn’t officially vegan-certified, it should be perfectly fine for you to have even if you happen to be vegan.

As for Reign’s official stance, they did give this response below when asked about how vegan their product was in an online forum.

We use no animal bi-products in any of our product lines. However, the product is not vegan certified.

So feel free to crack open a can of Reign, but remember, just because it’s vegan-friendly, it doesn’t mean you should drink too much of it.

While Reign may be pretty great for a vegan diet, here are some other options if you wish to explore other vegan-friendly energy drinks:

There are also some great powdered options such as:

Reign may be great for vegans, but for the caffeine-sensitive like myself, 300mg per can does sound a bit excessive.

Fortunately, there is a great alternate energy drink that comes with a far more sensible amount of caffeine.

REIZE is a powdered energy drink. Each 4g sachet contains 50mg of caffeine, enough to give you a nice lift without overdoing it.

REIZE is also completely sugar-free, with only 11 calories per serve.

REIZE also contains beneficial ingredients such as taurine, ginseng, and B-group vitamins, all from vegan-friendly sources— giving you that much-needed energy boost without the crash.

Best of all, you can get REIZE home delivered for only about $1 per drink, which is great value for money.

So try REIZE today, and I’m sure you’ll soon agree that it’s a smarter choice than Reign.