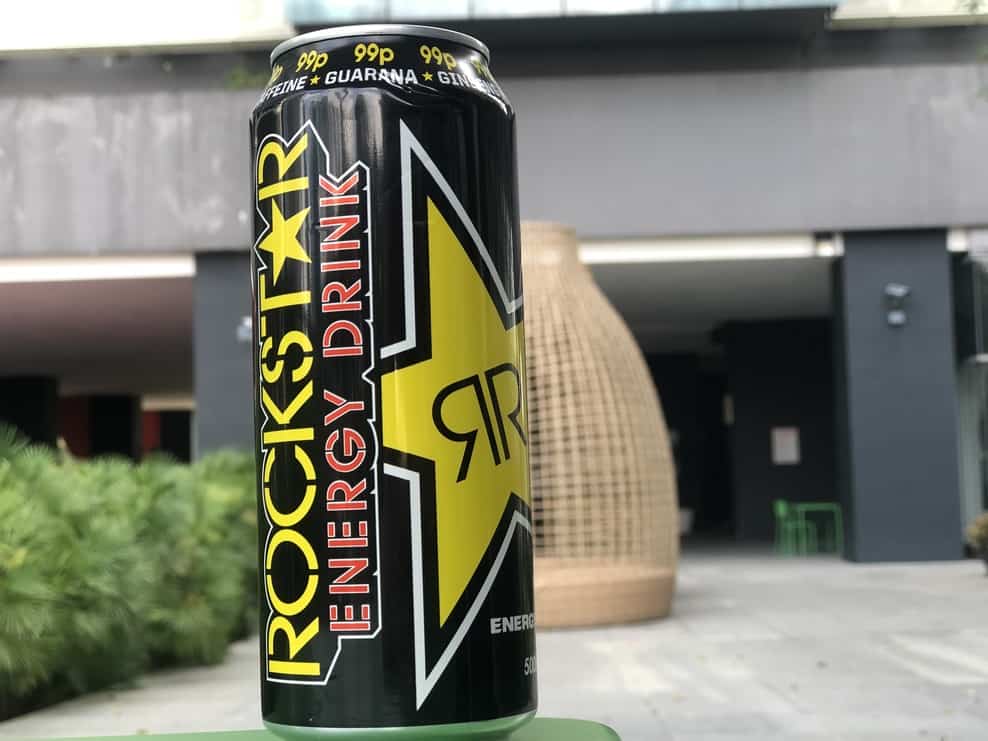 Wondering if that Rockstar Energy Drink you’ve been consuming is actually vegan-friendly? Worry not, ’cause I’ve done the research for you!

The simple answer is yes, Rockstar Energy Drinks are vegan-friendly.

Rockstar states that their drinks are suitable for both vegetarians and vegans—their Taurine content derived from synthetic sources.

But if you’re still skeptical, then take a look below to find out how vegan-friendly a can of Rockstar actually is.

Even if you change your mind about Rockstar Energy Drinks by the end of it, you can check out the other alternative vegan energy drinks I’ve compiled in a list at the end too.

Ingredients of a Rockstar Energy Drink

Well, from a first glance, nothing on the list seems like a potential offender except maybe the taurine content. With that said, most taurine is synthetically made, so there should be nothing to worry about.

Let’s delve a little bit deeper into the properties of each ingredients, shall we?

Are The Ingredients of a Rockstar Energy Drink Vegan?

There’s nothing in the ingredients of a Rockstar Energy Drink that would stand out as not being vegan-friendly except for taurine, which Rockstar has claimed comes from synthetic sources.

Yes, Rockstar Energy Drink is suitable for both vegetarians and vegans. The Taurine contained in Rockstar is synthetic and not derived from animals.

If you want to be extra sure, however, I’ve compiled the list below to give you an overview of the ingredients and its usual sources.

As you can see from the above, none of these ingredients stands out as being sourced from animals. Multiple synthetic elements? Sure. But none of them looks to be made from animals on the surface.

If you want to be extra sure, feel free to cross-reference the chart above with PETA’s handy animal-derived ingredients list here.

There is however a major concern, in that food coloring (such as Caramel and Riboflavin), while naturally sourced from plants or synthetically made, could be tested on animals before human use.

This article here goes further in-depth into the usage of food colorings in relation to animal testing.

Food colorings are generally unavoidable in any food product, so it really depends on where you draw the line as a vegan in regards to animal testing for food production.

How Much Sugar Does a Rockstar Contain?

Every 16 oz can of Rockstar contains 24 g of sugar.

The American Heart Association recommends that the daily added sugar limit for healthy adult men and women at 36 g and 25 g respectively.

This means a can of Rockstar just barely stays within the limit of daily added sugar limit for women and is well above half for men. Therefore, having two cans will definitely get you over the daily sugar limit for both sexes.

Having too much sugar consistently can lead to various short-term and long-term side effects. I’ve compiled a list below to give you a rough idea of the signs and symptoms:

It’s quite unlikely that a Rockstar would be your only source of added sugar for the day either, so be sure to keep track of what else you eat or drink when you’re having one.

Is The Sugar used in Rockstar Vegan?

Considering that sugar usually comes from plant sources, it would be logical to consider sugar as a wholly vegan ingredient.

With that said, there is a concern among some vegans that the use of bone char (charred bones from animals) in the refining process might render some sugars non-vegan.

However, sugar can also be refined with other decolorizing agents, such as activated charcoal. Meaning that it is close to impossible to track down where exactly is the sugar sourced from in every food product.

Even if the sugar in Rockstar might not come from organic sources, it really shouldn’t worry you all that much, as stated by PETA:

Don’t stress too hard about sugar if you’re unsure about how it was produced.

How Much Caffeine Does a Rockstar Have?

Personally, I prefer to have about 50 mg to 100 mg of caffeine per serve. Everyone has a different caffeine tolerance, however, so try out what works best for you.

Just remember that over-consumption of caffeine can lead to various side effects, so be sure to keep within the limit. Some side-effects of caffeine include:

Is The Taurine Used in Rockstar Vegan?

The Taurine used in Rockstar is vegan, as it’s synthetically sourced and not derived from animal products.

While natural taurine primarily comes from animals, most taurine found in commercial foods these days are synthetically made at a relatively cheap cost.

So it’s pretty safe to say that the taurine found in Rockstar and other energy drinks are vegan-friendly as well.

According to Rockstar’s official website, Rockstar Energy Drinks are gluten-free.

Since there are no traces of wheat, barley, or whey found on the ingredients list, it’s safe to assume that the drink should be as gluten-free as their site suggests.

How Does Rockstar Energy Drink Affect My Health?

As long as you’re perfectly healthy with no pre-existing conditions, having a Rockstar should do what any energy drink would do: give you a burst of energy and improve your ability to concentrate on the task at hand.

However, I would advise you to always have Rockstar in moderation.

Having 3 cans will put you well over your daily caffeine limit (160 mg per can/ 400 mg daily limit) whilst having more than two will definitely put you over the daily added sugar limit for both sexes.

Remember, just because something is vegan-friendly, it’s not equivalent to a green light to drink it constantly.

Is Rockstar Suitable for a Keto Diet?

As Rockstar has a rather high sugar content of 24 g per 16 oz can, it’s not an ideal beverage for you if you’re following a Keto diet.

A keto diet is a diet that revolves around foods of high fat and low carbs, essentially deriving more calories from protein and fats, and less from carbohydrates.

Sugar (or Sucrose) is a carbohydrate, and thus its presence in Rockstar isn’t really beneficial for people trying to have a Keto Diet.

If you’re trying to follow a keto diet but still want the taste of Rockstar, you should try their Sugar-Free Mix which is often available alongside their regular fare.

Also, do check out our list for energy drinks that are keto diet friendly!

Can I Drink Rockstar Energy Drink If I’m Vegan?

While not officially vegan-certified, none of the ingredients in a Rockstar should stop you from drinking it just because you happen to be vegan.

Be sure to keep track of how many you drink though. You’re still prone to the side effects of excessive sugar and caffeine consumption.

Just keep the recommended daily serving of caffeine and sugar in mind, and you’ll have the boost you need to get through the day with minimal side effects.

Looking for other vegan energy drinks? Here’s a list of them below to help get you started.

There are also powdered options such as:

Also, take a look at the video below for a quick guide on how to pick between energy drinks for the healthiest option.

Looking for something vegan-friendly that isn’t a can of Rockstar? Why not try REIZE?

REIZE is a powdered energy drink, with each 4 g sachet containing a sensible 50 mg of caffeine and is completely sugar-free, with only 11 calories per serving.

REIZE also contains a whole host of beneficial ingredients such as taurine, ginseng, and B-group vitamins, which are all from vegan-friendly sources— giving you that much-needed energy boost without the crash.

Best of all, REIZE ships straight to your door for only about $1 per drink, shipping costs included, which you gotta admit is a pretty sweet deal.

So give REIZE a go, and I’m sure you’ll agree with me that it’s a smarter choice than Rockstar.