Lucozade Caffeine & Ingredients (all the info) 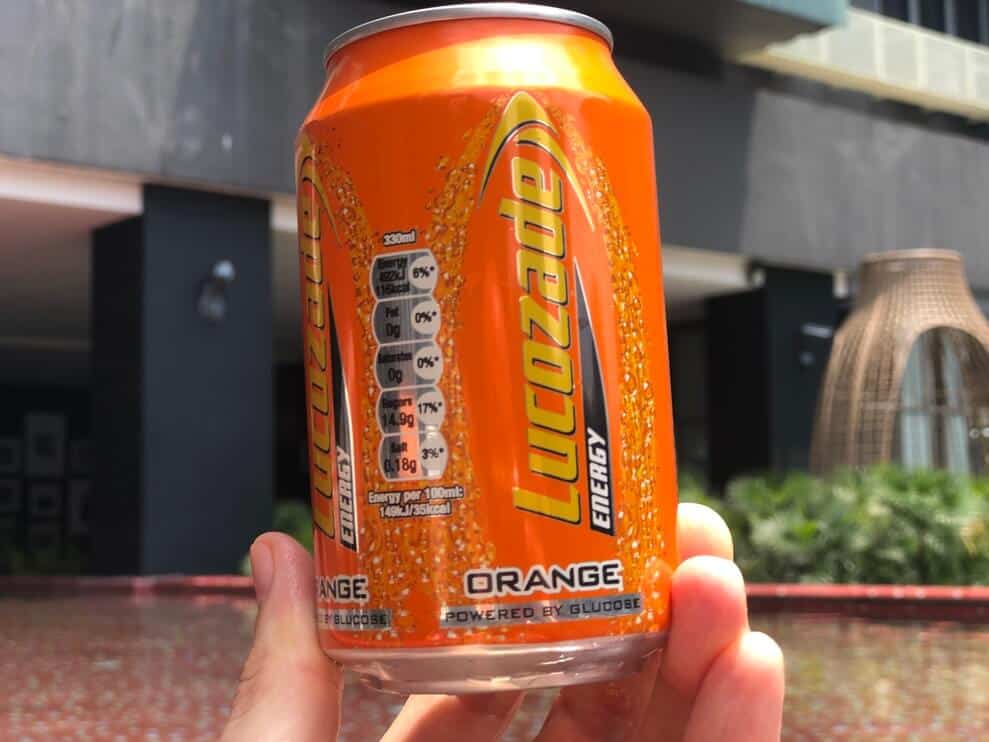 Have you ever wondered what’s in a can of Lucozade energy drink?

Lucozade Energy is an energy drink that contains caffeine, sugar, and artificial sweeteners which are supposedly great for giving you an energy boost.

But do the ingredients in Lucozade Energy really help you with that?

Read on as I explore what Lucozade Energy contains and whether these ingredients are good for you or not.

Let’s dive into the details…

What is Lucozade Energy Drink?

Lucozade was originally a soft drink brand in the UK that was created in 1927 by pharmacist William Walker Hunter. Back then its name was ‘Glucozade’.

In 1938, it was acquired by the pharmaceutical company Beecham’s and sold as an energy drink for the ill under a new name, Lucozade. It started off as a carbonated water and glucose drink with a slight orange flavour to it. Pharmacies sold it to patients from hospitals and to anyone who was sick.

It was rebranded as a ‘pick-me-up’ and sports drink in the late 1970s – early 1980’s as an effort to associate it with health instead.

By the early 2000s, the brands Lucozade and Ribena were sold off to Suntory, a Japanese manufacturer. Though it’s mainly manufactured and marketed in Japan, Suntory retained a Lucozade manufacturing factory in Gloucestershire, UK.

A 330ml can of Lucozade Energy drink contains the following ingredients:

From the list mentioned, there’s nothing out of the ordinary about the ingredients for an energy drink that is cause for concern.

However, Lucozade is actually lacking a number of other ingredients that you’d find in a typical energy drink.

Some of the components Lucozade Energy doesn’t have are amino acids like taurine, herbal extracts like ginseng, guarana, and B vitamins.

Those are some of the ingredients you can find in most energy drinks.

From this, I’d assume that Lucozade energy drink won’t be of much help for workouts or pulling an all-nighter.

Also, and I find this pretty incredible, there is no mention of exactly how much caffeine is actually in a can of Luzozade Energy.

I’d say Lucozade makes a good fizzy drink that’ll be just enough to keep you awake and energised for a few good hours.

The flavours that Lucozade Energy offers are:

Lucozade Zero is a sugar-free sub-brand to Lucozade Energy. So far, it has released three flavours:

I’m quite happy to see that Lucozade Energy has an extensive selection to choose from.

How much sugar is in Lucozade Energy drink?

A 330ml can of Lucozade Energy drink has 14.9g of sugars. This amount is still considered safe, as it’s within the limit of the daily sugar consumption guidelines from NHS.

According to the NHS, adults should limit their sugar consumption to about 30g per day. This amount includes the accumulated total of the sugars from your food and drinks in a day.

This is quite a lot and you’d need to reduce your intake of other sugary foods and drinks throughout the day after having just one can of Lucozade Energy.

I strongly suggest not exceeding the recommended daily sugar intake as you could run the risk of getting a sugar crash.

Besides feeling suddenly tired, too much sugar could lead to other side effects like:

Furthermore, you might not be able to lose much weight if you’re having Lucozade Energy regularly.

The calorie content per can is pretty high and unless you sweat it off, it’s going to affect your daily calorie count.

But why go to extremes when you have low sugar energy drinks or even better, sugar-free options available? I reckon sugarless drinks taste just as great, but without the extra calories.

If you find yourself still coming back to Lucozade Energy, the best way to have it is to drink in moderation.

Limit yourself to only one can in a day to avoid any unwanted side effects. Prevention is better than cure, after all.

Are there any artificial sweeteners in Lucozade Energy Drink?

All artificial sweeteners are strictly evaluated by EFSA before being approved for use in your food and drinks. So, there’s nothing to worry about.

A lot of people like to consume artificial sweeteners due to the fact that they’re low in calories but still have a delicious taste.

Sugarless energy drinks are great options if you’re on a weight loss journey or if you’re diabetic and can’t have sugar.

Many studies have found that artificial sweeteners can help with weight loss, while others have stated that sweeteners don’t have much of an effect on weight, and in fact could have the opposite results.

A 2015 study showed that replacing sugar with artificial sweeteners helped to decrease weight and calorie intake.

On the other hand, a review from 2009 suggested that artificial sweeteners may not benefit weight loss or help reduce weight at all, and instead lead to a larger calorie intake and obesity.

The findings are controversial, so my advice is to take them with a pinch of salt and not rely too heavily on them one way or another.

Do artificial sweeteners have side effects?

Unlike sugar, artificial sweeteners generally don’t cause any side effects. But some studies found that some sweeteners perhaps could.

One 2005 review reported that those who experienced frequent migraines were highly likely to have headaches after ingesting aspartame.

Artificial sweeteners like aspartame were linked to the risks of many diseases in the past too.

However, studies about this topic and their long-term effects have remained inconclusive.

Though artificial sweeteners are quite safe, you should still consume them in moderation.

If you’re on a weight-loss journey or you want to reduce your sugar and calorie intake, the best way is to have a balanced diet and a healthy lifestyle.

How much caffeine is in Lucozade energy drink?

A 380ml bottle of Lucozade Energy drink is stated to have 46mg of caffeine. However, I didn’t get this information from the official website as it wasn’t available there. I had to search online to find out how much caffeine there was in Lucozade Energy because it’s not printed on the packaging.

This is one issue I had with Lucozade Energy. They list caffeine as one of the ingredients but yet the specific amount of caffeine was not mentioned on the can.

This is strange, as most energy drinks will be open about how much caffeine is inside one can.

Since 380ml of Lucozade Energy seems to contain 46mg of caffeine, I assume 330ml has a little less but who knows for sure?

For most people, this amount of caffeine isn’t a lot and probably won’t lead to any adverse effects. A caffeine overdose is also quite unlikely.

However, some people have a low tolerance to caffeine and are caffeine-sensitive. If you happen to have these, you may still get side effects from drinking Lucozade despite the small amount of caffeine.

If you start experiencing these symptoms after having Lucozade Energy, you should stop drinking it and go for water instead. Consult your doctor if you are allowed to consume caffeine and how much caffeine you can have in a day.

How many Lucozade energy drinks can you have in a day?

An excessive intake of sugar could give you a sugar crash. It’s important that you stick to NHS’s daily sugar consumption guidelines to avoid these crashes and other unpleasant side effects.

I’m not saying it’s wrong if you like having Lucozade on a regular basis. But for the sake of your health, you should consume them in moderation.

Does Lucozade energy drinks have any benefits?

Personally, I wouldn’t say Lucozade Energy drinks are very beneficial for you. Like most energy drinks, it may have benefits but only if you limit your consumption to a sensible amount.

Lucozade Energy could supply you with an energy boost that might last you for a few hours.

The sugar in Lucozade would also make good brain fuel as your brain feeds on glucose to continue working. If you’re low on glucose, you might not be able to think properly.

To tell the truth, I find it hard to see Lucozade Energy as an energy drink.

It probably contains more sugar than caffeine. And sugar can provide an energy boost for a limited amount of time but it’s often followed by a sugar crash.

Lucozade’s great as a drink you have on a casual basis since it’s sweet and fizzy, but I wouldn’t suggest this as an energy-booster throughout the day or as a pre-workout beverage.

If you’re looking for something that isn’t as sweet as Lucozade Energy but still retains the same nostalgic taste, you can opt for Lucozade Zero, the sugarless version of Lucozade Energy.

I’ve tried it and it tastes similar to a regular Lucozade, just less sweet and lighter in taste.

Or if you prefer a beverage for sports or workouts, Lucozade has Lucozade Sports, sports drinks that contain a higher amount of caffeine, electrolytes, and B vitamins that could help you after you’re done with your exercises.

Here are some other great energy drinks you can try if you’re looking for alternatives to Lucozade Energy Drink:

REIZE is a highly versatile and compact powdered energy drink.

Aside from being packed with energy-boosting ingredients like taurine, ginseng, and B vitamins, REIZE also contains a sensible 50mg of caffeine.

This combination promises to supply you with an energy boost without resulting in many side effects afterward, and definitely no sugar crash.

In addition to being sugar-free, REIZE comes in lightweight sachets that you can take anywhere and drink anytime.

All you need to do is tear a sachet of REIZE open and mix the powder with a 250ml glass of water, and your energy drink is ready! REIZE is also very customisable as you can mix it with almost any beverage of your preference.

REIZE is very affordable, at only around $1 per drink, including delivery charges right to your door.

Try REIZE today and you might just find that it’s the perfect pick-me-up to start your day with and a smarter choice than Lucozade Energy.

Moose Juice Caffeine & Ingredients (full details)
← Previous
Reign Energy Drink Review (Is It Worth It?)
Next →