Mother Energy Drink Review (Worth It?) 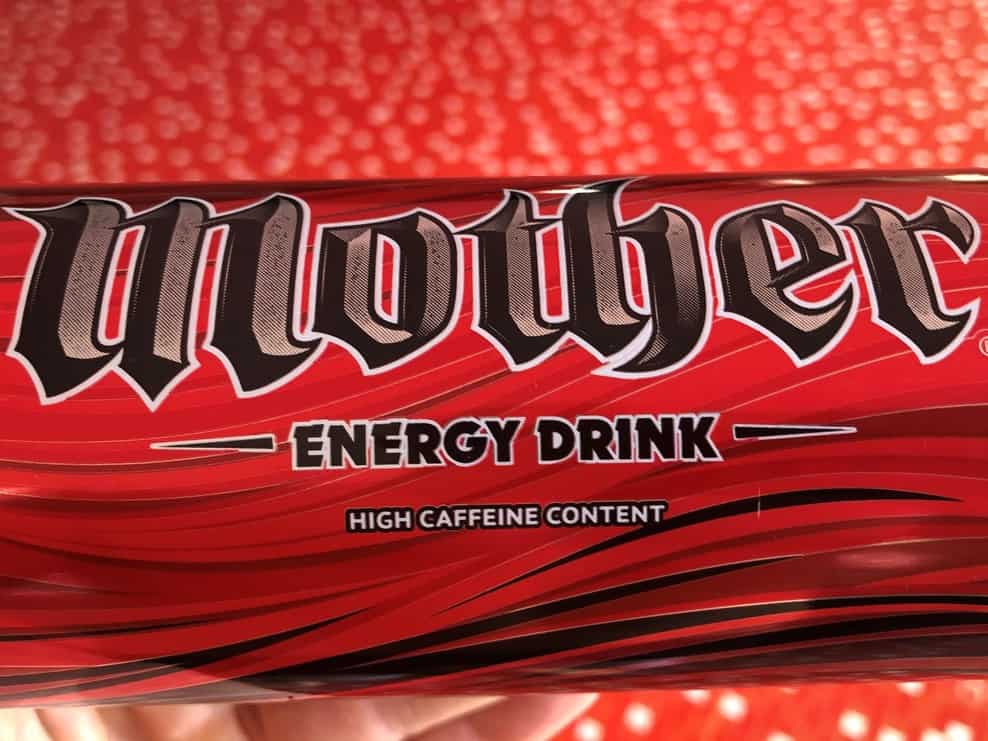 A local favourite in Australia and New Zealand, Mother Energy Drink is as old school as energy drinks can get, featuring old favourites such as caffeine and sugar, which give you the energy rush you need.

If you’ve clicked on this article, you’re probably wondering about my personal thoughts on Mother Energy Drink and whether it really gives you a decent boost

In short, I personally think that Mother Energy Original works pretty well, although the high sugar-content does lead to sugar crashes and generally being slightly worse for your health.

Mother Energy Sugar-Free, on the other hand, and is definitely the preferable version if you’re more focused on health instead of sugary goodness.

For a more detailed review, read on to find out more about Mother Energy Drinks, from nutrition facts to general taste, and see just how well this energy drink can work for you.

For starters, here’s a brief look at the nutritional value of both versions of Mother in comparison to other popular energy drinks:

How Many Calories Are In a Can of Mother Energy Drink?

A standard 500ml can of Mother Energy Drink Original has 228 calories, while the sugar-free version of the same size only has 23 calories.

Given that the average adult only needs around 2000 to 2500 calories per day, a single 500ml can of Mother Energy Original has around 1/10th of your daily caloric intake, which is quite a bit for an energy drink.

As such, Mother Energy Original isn’t exactly the best energy drink to have if you’re on a diet and watching your daily caloric intake, not to mention its high-calorie content might ruin your appetite for meals.

That being said, your body does need a substantial amount of calories to function, so if you’re feeling a bit low, having a can of Mother will definitely perk you right up.

Energy drinks aren’t really suitable as replacements for actual meals, as it does not provide the same amount of nutritions a meal would have.

So, be sure that you’re not consistently skipping meals in favour of energy drinks just because they’re convenient.

In short, while Mother Energy Original does have a pretty high calorie, it’s useful in certain situations and shouldn’t be too much of a problem so long as you have them in moderation.

And if you don’t want to deal with all the calories but still enjoy the taste of Mother, Mother Sugar-Free only has 23 calories per 500ml can, which is definitely a lot more preferable for some of you.

Mother Energy Drinks doesn’t contain anything too fancy in them, with their most notable ingredients, apart from caffeine and sugar, being taurine, guarana and B-Vitamins.

I’ve listed the ingredients of both Mother Energy Original and Mother Sugar-Free below, which you can always find on the back of the can.

Your standard Mother Energy Drink has 160mg of caffeine per 500ml, which is pretty average for an energy drink.

Probably the most important energy drink ingredient, caffeine, helps to keep you awake and improve your cognitive functioning and reaction times, which is pretty great.

While Mother Energy Drink isn’t the strongest energy drink on the market, it still has a bit more than what you might be used to, especially if you’re only an ocassional coffee drinker.

As such, depending on your caffeine metabolism and how used you are to caffeine, Mother’s 160mg of caffeine might be the right amount of caffeine for you.

Personally, however, I prefer my energy drinks to have somewhere between 50 to 100mg of caffeine per serving, so Mother Energy’s caffeine content is a bit much for me.

Of course, while everyone’s caffeine consumption and tolerances may vary, it’s still best to keep your caffeine content to a reasonable level.

In general, the American FDA approves a daily caffeine intake limit of 400mg per day, any more than that might lead to notable side effects such as:

Furthermore, consistently having too much caffeine might lead to some dependency issues, which might leave you cranky in the morning if you don’t get your fix.

In any case, so long as you can moderate your caffeine intake and don’t double down on other caffeinated beverages, you should be alright with having a can of Mother Energy.

Mother Energy Original has 51g of sugar per 500ml can, while the sugar-free version has, unsurprisingly, no sugar present.

51g is quite a lot of sugar. For reference, that’s nearly 3.4 tablespoons of sugar, which isn’t something you would actively consume.

Given that the AHA recommends a maximum daily sugar intake of 36g and 25g for men and women, respectively, even a single 500ml can of Mother goes way beyond that limit.

So while a can of Mother Original may give you a pretty good dopamine boost, it isn’t exactly the healthiest thing and will lead to a sugar crash after the effects wear off.

As you might’ve guessed, consistently having excessive sugar is pretty bad for you and can lead to notable side effects, such as:

As such, while Mother Original may be great for a short burst of energy, it’s not as good if you’re going for endurance, so Mother Sugar-Free might be better for getting through those late nights.

If you’re not too fond of sugar in general, take a look at the article I’ve written for the best energy drinks with less sugar for some notable alternatives.

Does Mother Energy Use Artificial Sweeteners?

Artificial Sweeteners are only present in Mother Sugar-Free, where the sugar is replaced by the zero-calorie sweeteners sucralose and acesulfame potassium.

As zero calories, sucralose and acesulfame potassium give you all of the sweetness without the nutritional baggage that usually comes with sweet beverages.

Due to Sucralose and Acesulfame Potassium being approved for general use by the FDA and health agencies around the world, they should be safe for consumption, so you needn’t be too worried about them.

B-Vitamins are pretty common in energy drinks, so it’s no surprise that it finds itself in Mother Energy, if only to make the drink just that little bit healthier.

While a fine addition to Mother, its probably better if you opt for dietary supplements instead if you actually need more substantial B-Vitamins in your overall diet.

In any case, I’ve listed the B-Vitamins found in Mother below, and if you like more info on B-Vitamins in general, click on the link here.

Mother Energy Drink has a pretty small selection of flavours, which include:

It’s definitely not as extensive as Monster or Bang’s selection of flavours, but if you like fruity energy drinks, Mother Energy has that covered in spades.

Mother tastes pretty much like what you expect an energy drink to taste like, but with a creamier, smoother finish in comparison to Red Bull or Monster.

If you’re fond of Red Bull and Monster, having a Mother Energy should give you a pretty similar experience, although the flavour notes are a lot subtler in comparison to the former two.

That being said, if you’re looking for energy drinks with a crisper, cleaner finish, Mother Energy certainly isn’t that sort of energy drink, plus the high sugar content is definitely not for everyone either.

As for its various flavours, Mother Energy does taste pretty close to what’s advertised on the can, so if you’re not too fond of the original flavour, some of the other ones might be more suited to your taste buds.

A regular 500ml can of Mother Energy will run you around $3, shipping costs and promotional events notwithstanding.

For a quick comparison, the table below should give you a rough idea of how pricy Mother is in comparison to other energy drink brands, specifically from online storefronts:

As you can see, Mother Energy is pretty cheap in comparison to other big-name energy drink brands, which is a definite plus if you’re on a budget.

Of course, where you get your energy drinks from plays a huge part in affecting the overall price. Not to mention the cost of shipping if you do get it online.

Mother Energy Original is a pretty solid energy drink, with its high sugar and calorie count being great for a quick pick-me-up, though it isn’t something you should drink consistently.

Mother Energy is pretty much a classic, sugary energy drink, having a fair amount of caffeine to keep you awake, and enough sugar to give you a pretty good rush when you finish having one.

That said, its high sugar content does mean that you really shouldn’t be drinking this daily, and I would highly suggest opting for low to zero-calorie energy drinks instead for your daily caffeine fix.

You’re also a lot more likely to suffer from a sugar crash with Mother Original, so be sure that you only need a short burst of energy for the tasks at hand, as it isn’t great for endurance runs.

All-in-all, Mother Original does its job fairly well, with a pretty decent taste and price point being nice bonuses.

If you’re interested in knowing what others have to say about Original Mother Energy Drink, this video below should help you with that:

A fair bit healthier than its sugar counterpart, Mother Sugar-Free is a pretty good energy drink in its own right, with the moderate caffeine content carrying the drink along just fine.

If you’re looking for a daily caffeine fix, Mother Energy Sugar-Free is definitely a pretty good option, especially since its sugar-free formula won’t affect your health all that much.

That being said, you probably shouldn’t be having too many cans of these per day, as going overboard with the caffeine might turn all that energy into a mess of jitters and headache.

So while it isn’t as great for you as a zero-calorie energy drink might be, if you happen to be a big fan of Mother, the sugar-free option is definitely worth a shot.

If you enjoy the taste of Mother Energy, here are some other energy drinks that you might also like:

Looking for an energy drink that’s lower on sugar and calories? REIZE might be the ticket you’re looking for.

REIZE is a great powdered energy drink with each 4g sachet having a sensible 50mg of caffeine and no sugar, with only 11 calories per serve.

It also contains a bunch of other beneficial ingredients such as taurine, ginseng, and B-group vitamins. All coming together in a smart blend to give the perfect boost without the dreaded crash.

The best thing of all, you can get REIZE home delivered right to your door for only about $1 per drink, which is amazing value for money.