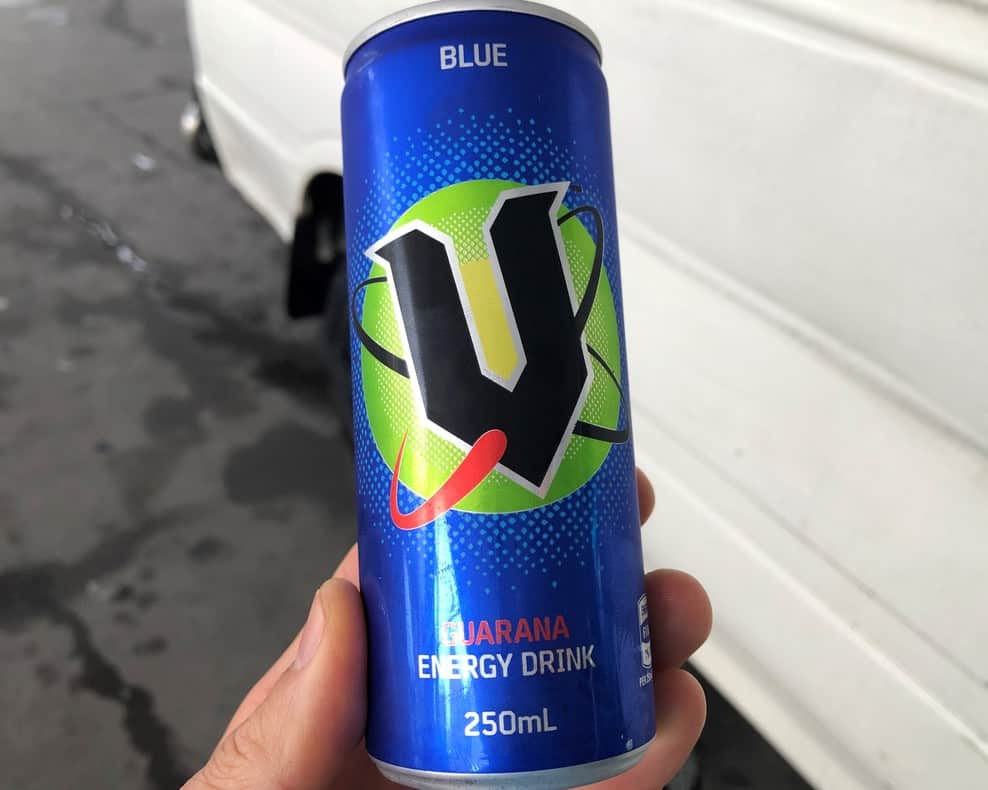 V Energy Drinks are great, but there’s something about Blue V Energy that might make it a little better, whether it’s the mysterious flavour or its blue aesthetic.

Of course, you’re probably wondering about my overall take on Blue V Energy too.

In short, Blue V is a great energy drink in a convenient package, having great taste, a reasonable amount of caffeine and just enough sugar to get a nice buzz going.

If you want to know more about Blue V Energy, read on for a more detailed look at its ingredients, nutrition facts, and a final review of just how good the Blue V Energy Drink really is.

First up, let’s take a look at Blue V Energy’s nutritional value against its closest competitors and see how it measures up:

How Many Calories are in Blue V Energy Drink?

That’s a relatively normal amount of calories for an energy drink of this volume. For comparison, a 250ml can of Red Bull has a slightly lower calorie count with 110 calories.

For context, the recommended daily calorific limit for healthy young adults ranges from 2000 to 2400 calories for women and 2400 to 3000 calories for men.

Therefore, 147 calories from a can of Blue V won’t really affect your diet that much unless you have a couple of them back to back, in which case you should certainly be mindful because all those calories do eventually add up.

If you live a relatively active lifestyle, 147 calories are pretty easy to burn off. Otherwise, there’s always plenty of zero-calorie energy drinks available, which would save you from worrying if you can burn the calories off or not.

Here’s a complete list of Blue V’s ingredients, for your convenience:

How Much Caffeine Is in a Blue V?

Each 250ml of Blue V contains 78mg of caffeine.

Personally, I prefer to have between 50 to 100mg of caffeine per serving, so Blue V Energy fits right into that sweet spot of having just enough caffeine to keep me going, but not so much that I might get a headache after.

On the other hand, if you’re a hardened caffeine veteran, or have exceptional caffeine metabolism, 78mg really isn’t much. So, you might find yourself reaching for an extra can or two to get the full effects.

For a quick overview of what caffeine does to you, take a look at the video below:

In any case, the FDA approves a caffeine intake limit of no more than 400mg per day. Any more than that might lead to side effects such as:

So, as long as you don’t have too many cans or consume any other caffeinated beverages alongside Blue V, you should be perfectly fine.

While 34.6g of sugar doesn’t sound like much, a can of Blue V Energy does have an amount that’s equivalent to 2 full tablespoons of sugar.

It’s definitely not as much as a Mother Energy Drink (which has 54g per 500ml can), but it’s still a pretty substantial amount of sugar to have in an energy drink.

Actually, considering that the size of the can is around half the size of a Mother, both brands have a similar amount of sugar per volume of liquid.

According to the AHA, you should keep your daily sugar intake to no more than 25g for women and 36g for men, while the UK’s NHS recommends a daily added sugar limit for adults of no more than 30g per day for both genders.

Considering the sugar content, a single can of Blue V Energy isn’t exactly the healthiest energy drink you can have, though it’ll definitely give you a rush.

Of course, it’s perfectly fine to have a Blue V Energy occasionally, especially when you’re trying to stay focused or need a boost for a late-night cramming session.

Just be careful not to overdo it, as too much sugar in a short period of time can and probably will lead to a sugar crash, which isn’t something you want in a high-intensity situation that calls for an energy drink.

Besides that, consistently consuming too much sugar can lead to some notable side effect such as:

So even if Blue V Energy doesn’t have all that much sugar compared to other sugary energy drinks, try not to have more cans than necessary. Your body will thank you for it in the long-run.

Apart from its flavour, Blue V Energy is also known for its guarana content. Blue V has 330mg of guarana per 250ml can, totalling 0.12% of the whole drink.

Hailing from Brazil, guarana boasts an impressive mix of ingredients, having components that range from stimulants to antioxidants.

As such, it’s found in numerous energy drinks such as Rockstar, and it certainly complements the energy providing properties of Blue V.

However, a large part of guarana is actually just plain ol’ caffeine, which is why it isn’t surprising that it has the ability to reduce fatigue and improve focus.

So while guarana extract might be a sneaky way of adding just a bit more caffeine into Blue V, the caffeine content in Blue V is already pretty low, so there’s no worry about a little more caffeine here.

Blue V’s mysterious flavour is part of its charm, but have it enough times, and you’ll notice that Blue V has a distinctive taste of passionfruit on top of the usual energy drink buzz.

The best way that I can describe what Blue V tastes like is that it pretty closely resembles Passiona or any other passionfruit inspired drinks.

It’s certainly enjoyable, although its carbonation means it’s pretty hard to down it all in one go.

In any case, it’s a pretty good flavour in my opinion, and if passionfruit is up your alley, you’ll certainly find Blue V to be a tasty and refreshing energy drink.

How Many Cans Of Blue V Can You Drink A Day?

I personally recommend that you have no more than one can of Blue V Energy per day, owing to the high amount of sugar in the drink.

While it would take you about 5 cans of Blue V before you hit anywhere near the 400mg daily caffeine limit, there’s already enough sugar present in a single can to meet the daily max sugar limit for men, and far exceed what a female should have in an entire day.

Actually, put that way, Blue V does have quite a bit of sugar in it.

Of course, that’s not to say you can’t splurge on a delicious Blue V every now and then. If it’s only on occasions, having two cans wouldn’t really affect your health too much, especially if the rest of your diet is healthy and balanced.

That said, you shouldn’t be having more than a can a day at any consistent rate. That will definitely add more sugar than necessary into your system, and sugar isn’t exactly the healthiest of ingredients.

So as long as you have Blue V Energy in moderation, there shouldn’t be any ill effects from having it unless, of course, you dislike the taste of passionfruit in which case you probably don’t want to have it at all.

A regular 250ml can of Blue V costs somewhere around $2.50, depending on where you get it from.

Supermarkets like Coles and Woolies are usually the cheapest places to buy them, while convenience stores and petrol stations are often a fair bit more expensive.

Overall, Blue V costs about the same as a can of Red Bull, Mother or Monster. They’re all fairly similarly priced.

As such, it’s definitely worth giving Blue V a go at some point because it doesn’t hurt to have some variety in your life.

If you’re still looking for a better deal on Blue V, I’ve written an article on the best energy cheap drinks, which you might be interested in.

Overall, I would give Blue V Energy a solid 8 out of 10. It’s definitely a good energy drink with a great flavour and a fairly reasonable price, even if it’s a bit too carbonated for my taste and contains a far bit of sugar.

If you’re a fan of Original V, Blue V will definitely shake things up for your taste buds, and it’s worth alternating between them if you ever get tired of having a single flavour.

Between its price and taste, there’s not much to complain about with Blue V Energy. It might have more sugar than necessary, but that comes with the territory with energy drinks such as these.

If you’re a fan of stronger energy drinks, you might find Blue V to be a bit mild, but if you’re looking for a quick pick-me-up, you really can’t go wrong with Blue V.

Try one for yourself and see if it works for you.

If you’re looking for some other lower-caffeinated energy drinks similar to Blue V, here are some good options you might enjoy:

You might also enjoy energy drink powders. They’re a lot more convenient, and you can adjust your servings to what works best for you. As a bonus, they’re usually more affordable than ready-to-drink energy drinks too.

Blue V is pretty good, but REIZE is even better in my opinion.

REIZE is a great powdered energy drink that comes in a lightweight 4g sachet. With a sensible 50mg of caffeine, REIZE is completely sugar-free and has only 11 calories per serving.

REIZE also contains a smart blend of taurine, ginseng, and B-group vitamins. It’s the perfect energy drink mix, giving you the perfect amount of focus and energy without the sugar crash you might get after having a can of V.

Best of all, you can get REIZE delivered right to your door for only about $1 per drink.