Is Mother Energy Drink Bad For You? (And More) 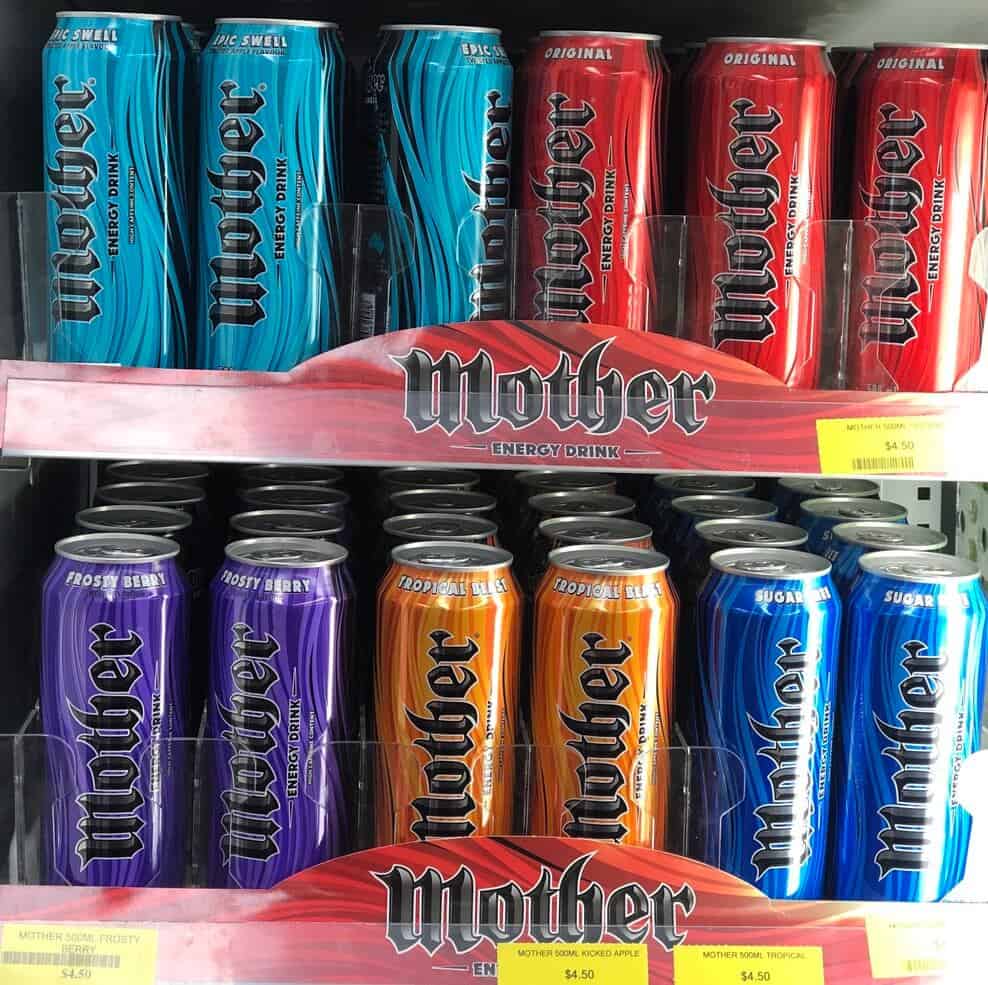 Marketed in Australia and New Zealand, Mother Energy Drink is a big hit with the locals.

It’s got a great taste, a variety of flavours, and is packed full of ingredients to keep you going all day or late into the night. But it also contains high sugar and caffeine content.

So then you might be wondering, is Mother Energy Drink bad for you?

The quick answer is, so long as you have Mother Energy in moderation and only when necessary, I personally believe it’s not bad for you and won’t negatively affect your health.

For a more in-depth look at Mother Energy Drink (both Original and Sugar-Free), its ingredients, and how exactly they might affect your body, stick around.

I’ve compiled a table below if you’re interested in having a closer look at Mother’s nutrition info.

While 228 calories don’t sound like much, Mother Energy Original still contains roughly 1/10 of your daily calorie intake, which adds up if you’re also having three square meals a day.

So if you’re someone who’s on a diet or are counting calories, I suggest trying Mother Sugar-Free instead. It has 23 calories, which would lead to a much lower impact on your daily calorie intake.

For the more diet-savvy, you might be thinking that Mother Energy might not be the best energy drink to have on a diet.

To help you with that, I’ve compiled an article on the best energy drinks that burn fat, so check that out if you want to learn more.

A list of all the ingredients in Mother Energy Drinks.

The ingredients in Mother Energy Drink seem to contain the standard energy drink fare, and there’s nothing in it that would be exceptionally bad for your health consumed in excess.

The Original Mother Energy Drink has 51g of sugar per 500ml can. On the other hand, the Sugar-Free version contains no traces of sugar (as advertised).

The AHA advises that the daily added sugar limit for adults is 25g for women and 36g for men. The amount of sugar in a single can of Mother Energy Drink definitely goes over that limit.

For reference, at 51g, the Original Mother Energy Drink contains roughly two and a half tablespoons of sugar, which is a lot.

You may try to fool yourself by sipping it slowly, but the end outcome is still the same—a lot of sugar consumed, which can lead to some notable side effects such as:

Now that isn’t to say you should completely avoid Mother Energy.

The high sugar content does give you that burst of energy you need when going on that run or putting the final touches on an assignment the night before it’s due.

But if you drink it all at once, you’re bound to end up with a sugar crash, leaving you fatigued and sluggish after (not something you want from an energy drink).

Sugar-Free Mother Energy Drink, however, doesn’t have any sugar in it, so you can try that out if you’re worried about the sugar content or happen to be diabetic.

Diabetic, or not a fan of sugar? I’ve written about a bunch of energy drinks that are suitable for diabetes which you can check out.

Are There Artificial Sweeteners in Mother Energy Drink?

The Original version of Mother Energy Drink does not contain any sweeteners, while the Sugar-Free version DOES contain artificial sweeteners. Namely Acesulphame Potassium and Sucralose

The Sugar-Free version has all the same ingredients as the Original Mix, but switches out the sugar (Sucrose) for the sweeteners Acesulphame Potassium and Sucralose.

Both sweeteners contain zero calories and are a lot sweeter than regular sugars (between 200 to 700 times as sweet).

While the lower calorie content does help, there’s still a lot we don’t know about artificial sweeteners. A more in-depth discussion can be found in this article here.

I personally think that you shouldn’t worry too much about artificial sweeteners, but I wouldn’t blame you if prefer to avoid them.

The caffeine content of the Original and Sugar-Free version of Mother Energy Drink is 160mg and 159 mg per 500ml can respectively.

160mg of anything usually doesn’t sound like much, but for caffeine, it’s a lot. Mother Energy Drink is still middle of the range in terms of caffeinated energy drinks, but still contains a considerable amount.

The FDA generally recommends a 400mg hard limit on caffeine consumption, which means you could only have 2 cans of 500ml Mother Energy Drink before you go over that limit.

While caffeine within normal doses can help improve concentration and makes you feel less tired, over-consumption of caffeine can lead to some pretty bad side effect, notably:

A more detailed description of the possible side-effects can be found in my other article here.

Though how sensitive you would be to the side effects of caffeine depends on your caffeine metabolism, it’s still not a great idea to go over the recommended limit.

I personally prefer energy drinks with 50 to 100 mg of caffeine per serving, which I find is sufficient to keep me going without any noticeable side effects from too much caffeine.

What Happens if I Drink Too Many Mother Energy Drinks?

While having a Mother Energy Drink every now and then can give you a good energy boost, having too many might leave you with a sugar crash and feeling worse than befofe you started.

Mother Energy Drinks are great for refreshing your mind and giving you the extra push you need to get the job done. They have a great concoction of ingredients that will definitely keep you well awake.

However, you might want to take a step back if you find yourself reaching for one a bit too often. Too many energy drinks in a day may cause some serious issues that are hard to shake off.

While you won’t see the effects of excessive sugar intake instantly (it’s pretty bad in the long run), having too much caffeine in one go will definitely have some immediate side effects.

In a nutshell, so long as you have Mother Energy Drinks in moderation and only when you need them, I’m positive that you’ll be just fine.

Disclaimer: check with your doctor before adding Mother Energy Drink to your regular diet.

How Many Mother Energy Drinks Can I Have A Day?

I personally suggest that you have a total of only one Original Mother Energy Drink every other day (due to the high sugar content). For the Sugar-Free version, I would still recommend one, but two as a maximum.

For Mother Energy Original, it’s the high sugar content you have to watch out for. While it’s perfectly okay to have one occasionally, a can daily (at 51g of sugar) might not be great for your health.

For Mother Sugar-Free, on the other hand, you can worry less about the sugar quantity, but the caffeine is definitely prominent enough for you to watch out for.

While two cans at 320mg total won’t put you over the 400mg daily limit for caffeine, three cans definitely will. So for best results, I would recommend two cans if you really need it, but one can should work in most situations.

It’s also worth pointing out that both the Original and sugar-free versions of Mother both have “recommended one can per day max” printed on the can. That’s probably there because of the levels of B vitamins, but it’s still probably a guide guide to work off.

One can per day is a pretty smart limit.

Is Mother Energy Drink Bad For Your Health?

I personally think that having a Mother Energy Drink in moderation is not detrimental to your health. Provided you live a relatively healthy lifestyle, a can every now and then should be just fine.

As long as you don’t have any preexisting health conditions that might be aggravated by sugar or caffeine, then it’s perfectly fine to have a Mother Energy Drink occasionally.

Just keep in mind how frequently you have one, and you should be perfectly alright.

However, if you’re still worried, it’s always best to consult a health professional before adding anything to your diet.

A more in-depth look on the subject can be found in the video below:

If you’re new to Mother Energy, you’ll be interested to know they have plenty of flavours, such as:

Have fun trying them out to see which ones your taste buds prefer.

If you’re looking for another energy drink that’s as good as Mother Energy or something new to try out, here’s some options that might tickle your fancy:

More of a powdered energy drink fan? There’s plenty for you as well:

Looking for an energy drink that’s low on sugar and calories? How about REIZE?

REIZE is a powdered energy drink with each 4 g sachet having a sensible 50mg of caffeine and is completely sugar-free, with only 11 calories per serve.

It also contains a bunch of other beneficial ingredients such as taurine, ginseng, and B-group vitamins. All coming together to give you an energy drink with all the boost but without the dreaded crash.

The best thing about it? You can get REIZE home delivered right to your door for only about $1 per drink.

So try REIZE today, and I think you’ll agree that it’s better than Mother and more delicious too!