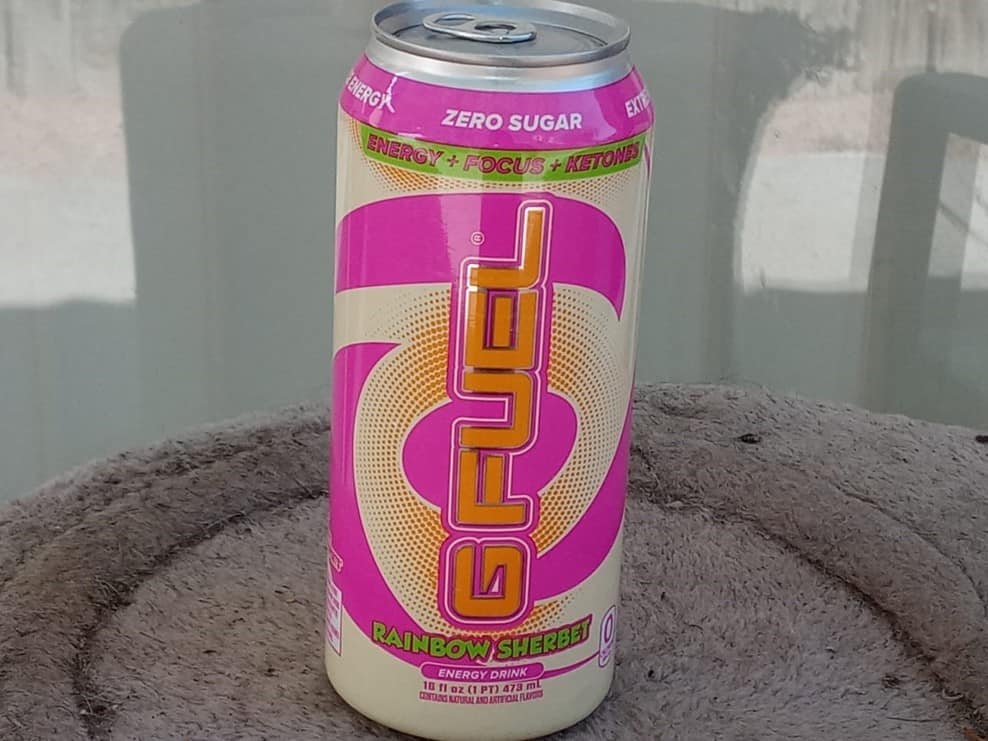 Love the taste of G Fuel but can’t seem to find the time to mix one up in the morning? G Fuel Cans might be the solution to your woes, featuring everything you love about powdered G Fuel, repurposed into a ready-to-drink can.

That said, canned G Fuel isn’t simply powdered G Fuel in the form of a can. There are plenty of other things that go into the carbonated, canned version of G Fuel, and it’s an entirely different formula.

If you’re here, you’re probably wondering about my thoughts on G Fuel cans and how it stacks up against its closest competitors.

In short, I think G Fuel cans definitely work as a quick alternative to regular G Fuel with a similar, great taste. That being said, you do lose out a lot of flexibility when compared to the powdered version and I’m not a fan of all of the ingredients in G Fuel cans.

For a more detailed analysis, let’s dive into everything there is to know about G Fuel Cans…

First up, here’s a quick nutritional comparison between G Fuel Cans, G Fuel Powder, and some of the more prominent energy drinks on the market.

How Many Calories Are In G Fuel Cans?

G Fuel Cans don’t contain any calories, which is great if you happen to be closely watching your daily caloric intake.

If you happen to be on a diet but still crave the kick from an energy drink, having a can of G Fuel lets you enjoy a treat without affecting your diet, as its absent calories won’t add anything to your diet.

That said, while it may be great for keeping your calories in check, you’re not exactly getting any actual ‘energy’ from G Fuel cans either.

Despite their often negative connotations, your body needs a certain amount of calories to function, which, for a healthy young adult, ranges from between about 2000 to 2400 calories for women and 2400 to 3000 calories for men.

It’s only when you start having too many calories that you might suffer some negative consequences, and even then, as long as you live an active lifestyle, it’s not too hard to burn off calories either.

In any case, be sure that you have some healthy calories to burn before you crack open a can of G Fuel, as you still need the energy to feel the full effects of the energy boost.

If you’re a frequent consumer of the original G Fuel, you might notice that the formula for the canned version is quite different, but fret not, as there isn’t too much of a difference, nutrition-wise, between the two G Fuels.

Here are all the ingredients of a G Fuel can as written on the back of the can.

How Much Caffeine is in a G Fuel Can?

A regular 16 fl.oz can of G Fuel has 300mg of caffeine, which is a pretty substantial amount of caffeine for an energy drink of that size.

If you’re used to regular powdered G Fuel, you should be aware that canned G Fuel has twice the caffeine than what you’re used to (300mg vs. 150mg), so consider that before you get one, because that much caffeine isn’t suitable for everyone.

Personally, I prefer my energy drinks to have somewhere around 50 to 100mg of caffeine per serving, which is just enough to give me a good energy boost, but not so much that there might be side effects afterward.

But, while I’m personally not a big fan of G Fuel can’s high caffeine content, it’ll definitely give you the boost you need if you have the caffeine metabolism to tolerate it.

Still, even if you have built up a tolerance to caffeine, the FDA approves a caffeine intake limit of no more than 400mg per day. Any more than that might lead to side effects such as:

Due to G Fuel’s relatively high caffeine content, it’s best not to have any other caffeinated beverages, such as coffee, tea or sodas, if you plan on having a can of G Fuel anytime soon.

But so long as you can regulate your caffeine intake and know what your tolerance is, a can of G Fuel is certainly going to give you the boost you need.

How Much Sugar is in a G Fuel Can?

G Fuel Cans contain no added sugar and are completely sugar-free, which definitely gives it a healthier edge in comparison to regular sugary energy drinks.

Being faithful to the powdered version, G Fuel Cans are sugar-free, which definitely makes it a pretty smart choice for your health.

Having no sugar, a can of G Fuel is definitely a lot healthier than most of the other sugar energy drink offerings on the market, especially in the long-run, as you don’t have to worry about overstepping your daily added sugar limits.

You’ll also get to avoid the dreaded sugar crash you might get from other energy drinks, which is a huge plus if you’re planning to keep working after the effects of G Fuel wear off.

While you won’t experience the same dopamine hit that you usually get from an energy drink, given how bad sugar can be for you if consumed in excess, it seems like a pretty good tradeoff to me.

As both Sucralose and Acesulfame Potassium are zero-calorie artificial sweeteners, they don’t have a massive impact on the overall nutritional value of a G Fuel can, which is definitely a good thing.

While artificial sweeteners are sometimes a controversial topic, they have been approved for use by the FDA, so there’s really not much to worry about so long as you have them in moderation.

Other Ingredients In G Fuel Cans

Beta-Hydroxybutyrate is a ketone produced by the body when there’s no protein or carbs present, to be converted into calories.

This means if you have a relatively healthy diet and aren’t starving yourself, there’s little reason for your body to produce any Beta-Hydroxybutyrate in the first place.

As for its presence in G Fuel cans, while it’s supposedly useful for giving you energy, a feeling of fullness, and sports performance, the science doesn’t seem to agree on that point.

Add to the fact that we don’t exactly know how much Potassium Beta-Hydroxybutyrate is present in a can, you should probably take this ingredient with a large pinch of salt.

Any good energy drink has vitamins in them, so the Vitamin B and C content is definitely appreciated in G Fuel cans.

Just like its powdered version, G Fuel cans also have Vitamin C present, which is somewhat of a rarity among energy drinks.

In any case, I’ve listed the relevant B-Vitamins in the table below, but if you’re interested to learn more about them, click here.

While not as extensive as the original powdered version, G Fuel Cans do have a fair variety of flavors, with some original classics thrown in for good measure:

If you’ve had G Fuel before, it tastes almost exactly like the powdered version, albeit a lot more pronounced due to both the can usually being chilled, as well as the fizzy carbonation adding to the sense of flavor.

The best way to describe G Fuel cans is simply that it tastes like G Fuel with a stronger finish, which makes it a pretty good carbonated version of your favorite G Fuel flavor.

Although the flavor selection of G Fuel cans is a lot lower than their powdered options, if you find a flavor that’s available on both options, it’s definitely a great alternative to regular G Fuel powder.

But, if you’re not a fan of carbonation, you might want to stick with regular powdered G Fuel for now.

For a more in-depth look at each of the flavors and how they fare against each other, have a look at the video below:

A 16 fl.oz can of G Fuel runs around $24 per 12-pack, which is a fairly average price for an energy drink can of that size.

While you’re not getting as much bang for your buck as with a regular tub of G Fuel Powder (which is around $30 for 40 servings), it’s definitely not the priciest energy drink on the market either.

That said, it’s not quite as cheap as a 16 fl.oz can of Reign (around $1.60 per can), which has the same caffeine content as G Fuel Cans.

But if you like the taste of G Fuel, the canned version is pretty affordable, so it wouldn’t do you any harm to stock up on a few of these for occasions where you don’t want to spend time mixing up a G Fuel powder.

In the debate between G Fuel Cans and G Fuel Powder, it ultimately boils down to what you’re looking for; if you want convenience, go for the can. If you want flexibility, the powdered version is for you.

G Fuel Powder gives you a lot more flexibility to optimize the servings and concentration to what works best for you at any given time, whilst having a lot more servings for your money’s worth.

G Fuel Cans, on the other hand, are pretty convenient whilst retaining the same great taste without the need to spend time prepping. G Fuel cans are definitely a lot easier to have on the go.

For a more detailed look at this whole debate, check out the article I’ve written on G Fuel Cans VS. G Fuel Powder, which I’m sure you’ll find informative.

All-in-all, I would give G Fuel Cans a solid 8 out of 10. Although an offshoot of G Fuel Powder, its crisp taste and reasonable price is definitely appealing. The massive caffeine content seems unnecessary and there aren’t as many flavors as G Fuel powder.

While not as well-known as its powdered counterpart, G Fuel cans work as a great alternative to the regular powdered version, giving you a boost without the need to worry about serving sizes, prepping and water concentration.

Granted, canned G Fuel doesn’t have the flexibility or the variety of flavors offered by powdered G Fuel, it still does its job well, and at a fairly decent price to boot.

That said, G Fuel can’s high caffeine content means it definitely isn’t suitable for everyone, especially if you happen to be caffeine-sensitive.

But if you need to get an edge in your gaming session, or simply need to stay awake for a bit longer, G Fuel cans are definitely a decent choice among the wide world of energy drinks out there.

While G Fuel cans might be great, here are some other awesome alternatives if you’re open to trying new things:

There are also some awesome powdered options, and of course, original G Fuel is one of them:

G Fuel Cans are great, but 300mg of caffeine isn’t ideal in my opinion, so how about an energy drink that gives a great energy boost without the potential for a caffeine-induced headache?

REIZE is a great powdered energy drink that comes in a convenient 4g sachet. It has a sensible 50mg of caffeine, is completely sugar-free, and has just 11 calories per serving.

Try REIZE today and I’m sure you’ll agree that it’s a smarter choice than G Fuel.