Is Game Fuel Energy Drink Bad For You? (Revealed) 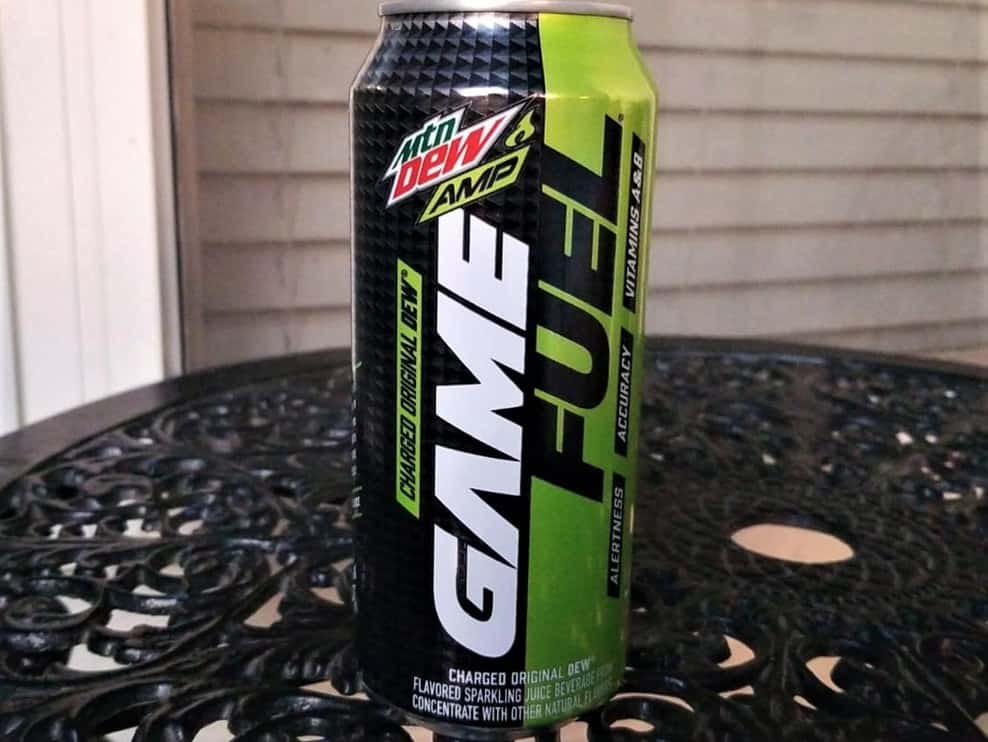 If you need an energy drink to give you a boost through those late-night slogs or high-intensity gaming sessions, Game Fuel might be the energy drink you’re looking for.

Featuring only a moderate amount of caffeine and sugar, Game Fuel is definitely one of the healthier energy drinks you can find, but is that enough to make it good for you?

For the short answer, so long as you’re relatively healthy and know how to moderate your caffeine and sugar intake, having a can of Game Fuel, even every day, shouldn’t negatively affect all that much.

For a more in-depth, detailed response, read on below as we go through just what exactly makes Game Fuel tick, and whether or not it can be good (or bad) for you.

Let’s start with a quick look at the nutritional value of Game Fuel to get a sense of what you’re getting out of one nutritionally:

As you can see, Game Fuel is pretty standard fare, as far as energy drinks are concerned, with the only surprising thing being the inclusion of Vitamin A, which is quite rare for an energy drink.

How Many Calories Are In Game Fuel?

A usual 16fl.oz can of Game Fuel has only 90 calories, which is a fairly low amount.

While Game Fuel probably isn’t going to find itself on any zero-calorie energy drinks list, it’s certainly a lot lower than what you would usually find off the shelf.

As such, Game Fuel is a pretty good choice if you’re on a diet but want a couple of extra calories to keep you going so you don’t get burnt out once the energy drink effects wear off.

That being said, your body does need a fair amount of calories to function, which usually ranges between 2000 to 2500 calories, depending on lifestyle choices and other biological factors.

So while a can of Game Fuel may be a pretty good pick-me-up if you’re feeling a bit down, it isn’t exactly the best option to go for if you’re actually in need of a proper meal.

On that note, try not to have too many cans back-to-back either; while one can is well within your daily allowance, having more than one will certainly rack up those calories pretty quickly.

All-in-all, Game Fuel’s calorie content isn’t large enough to be too worrying, but if you want to stay on the healthy side of life, be sure to keep those cans to a minimum.

For more information on energy drink nutrition facts and how exactly they can inform you, have a look at the article I’ve written on the exact topic, you’ll be sure to find it useful.

A list of Game Fuel’s ingredients, all sourced from the back of the can:

At first glance, Game Fuel has a pretty intimidating ingredients list, so if you would like a more in-depth look, check out the article I’ve written on Game Fuel’s Caffeine and Ingredients for a detailed overview.

There’s only 90mg of caffeine present in a 16 fl.oz can of Game Fuel, which is generally quite low for an energy drink of its size.

For an energy drink, Game Fuel has a pretty mild amount of caffeine, especially considering that energy drinks (such as Reign and Bang) can reach up to 300mg of caffeine per serving.

As such, if you happen to be caffeine-sensitive or want to dip your toes into the energy drink world, a can of Game Fuel is definitely a great starting point to get a feel if you would enjoy its effects.

Personally, I prefer my energy drinks to have between 50 to 100mg of caffeine per serving, which is just the right amount to give me a nice boost, but not so much that it’s headache-inducing.

As such, Game Fuel is definitely one of the few 16 fl.oz energy drinks whose caffeine content suits me just fine.

Of course, not everyone has the same tolerance towards caffeine, so if you have a high caffeine metabolism or are used to stronger energy drinks, then Game Fuel might not work all that well for you.

But if you enjoy the taste of Game Fuel, having a couple of cans for that caffeine hit isn’t too detrimental, considering Game Fuel’s low amount of caffeine.

Just be sure not to go too overboard with it, The FDA approves a caffeine intake limit of no more than 400mg per day, and any more than that may lead to side effects such as:

In any case, you’re not going to suffer from any caffeine-related side effects with a single can of Game Fuel; hence, as long as you keep your caffeine intake in check, you should be fine.

How Much Sugar Is In A Game Fuel?

Game Fuel only has 23g of sugar per 16 fl.oz can, which is a fairly small amount.

While not sugar-free, Game Fuel has a lot less sugar than what you would find in either a can of Red Bull (27g per 8.4fl.oz) or Monster (54g per 16fl.oz), which makes it healthier than most other sugary energy drinks.

As the AHA recommends a daily sugar limit for both men and women to be 36g and 25g, respectively, a can of Game Fuel is just barely below the limits for both sexes.

As such, a single can of Game Fuel shouldn’t be too bad for you, but having more than one can tip you over the edge, especially if you want to keep your added sugar intake to a healthy minimum.

While it’s fine to indulge in some sugar occasionally for its sweet taste and dopamine rush, having too much sugar regularly may lead to some notable health issues, such as:

Sugary energy drinks are also more likely to give you a sugar crash, where you feel slow and lethargic due to your body processing all the additional empty sugars you’re getting from the energy drink.

That being said, Game Fuel’s considerably small sugar content means that a single can is unlikely to trigger a sugar crash. Therefore, as long as you stick with one can, you should be fine.

On the other hand, if you’re looking for an energy drink just for caffeine and carbonation, have a look at the article I’ve written on the best sugar-free energy drinks for some low-calorie, zero sugar alternatives.

Does Game Fuel Use Artificial Sweeteners?

As Sucralose and Acesulfame Potassium don’t contain any calories, they don’t add any additional nutritional value to the drink, meaning it’s mostly used to add an even sweeter taste to Game Fuel.

Personally, I find the addition of artificial sweeteners in an energy drink which already contains sugar a bit odd, especially since they do alter the taste of the drink, however slightly.

While not as excessive on the caffeine or sugar as other energy drinks might be, Game Fuel does work fairly well, giving you a moderate but consistent energy lift while the effects last.

Most of Game Fuel’s main benefits come from caffeine, which helps to keep you awake, improve reaction times, and even assist with cognitive function, to name a few of its benefits.

As a gaming energy drink, Game Fuel’s mild caffeine content is pretty beneficial, especially since having too much caffeine may cause you to be jittery and throw you off your game.

In addition, sugar serves as an easy source of fuel for your cells, which is a plus if you need a quick pick-me-up to keep your blood sugar afloat.

To conclude, Game Fuel works pretty well both 3 hours into a gaming session or at the start of your day. That said, be sure not to have it too late into the evening, in case you risk giving yourself insomnia.

Can You Have Game Fuel Daily?

Given its fairly mild sugar and caffeine content, having a can of Game Fuel a day is actually perfectly fine, but any more than that is adding on quite a bit of sugar into your diet.

While there’s no need to worry about a caffeine-induced headache with Game Fuel, the sugar content is a bit of a problem, especially once you’ve finished 2 or 3 cans.

As stated earlier, having too much sugar in your diet is pretty bad for you, so while it’s fine to go on a sugar binge occasionally, you definitely don’t want to be having more than one can daily if you value your health.

Remember, just because Game Fuel is healthier than your average sugary energy drink, it doesn’t exactly mean it’s healthy in itself.

All-in-all, so long as you keep your daily consumption amount to a single can of Game Fuel per day at the right time, you’re all set.

Is Game Fuel Bad For You?

So long as you’re relatively healthy and know how to keep your caffeine and sugar intake to a healthy level, Game Fuel is definitely not bad for you at all.

As with any caffeinated beverage, Game Fuel only starts becoming really bad for you when you start having more of it than you can handle, especially if you’re caffeine sensitive.

Apart from that, you also shouldn’t have Game Fuel (or any other caffeinated beverage), if you’re pregnant, nursing, below the age of 18, or have medical conditions affected by caffeine or sugar.

And of course, having more than one can per day is going to rack up quite a bit of sugar and calories in your system, so do try to keep your daily Game Fuel intake to a minimum.

But, as a casual drink to have whilst gaming, Game Fuel is definitely not the worst thing you could have, and if you’re still having doubts, consult a nutritionist to find out if adding Game Fuel to your diet is right for you.

For a detailed look on energy drinks in general and whether or not they’re bad for you, have a look at the video below:

Game Fuel has a pretty small selection of flavors, so unless you’re fond of some basic fruity flavors, Game Fuel probably isn’t going to scratch any of your particular niches.

If you’re looking for other great energy drinks that are similar to Game Fuel, have a look at the list below:

There are also some great powdered options for you to consider as well, which give you the benefit of being able to adjust the servings to your own specific taste:

While Game Fuel may be pretty great, I find this particular energy drink to be even better.

REIZE is a powdered energy drink that comes in a convenient 4g sachet. With a sensible 50mg of caffeine, it’s completely sugar-free and has just 11 calories per serving.

REIZE also contains a smart blend of taurine, ginseng, and B-group vitamins, all of which combine to give you the perfect energy boost for a long gaming session without the sugar crash afterward.

Best of all? REIZE ships straight to your door for only about $1 per drink.

That’s outstanding value for money and a lot more affordable than Game Fuel.