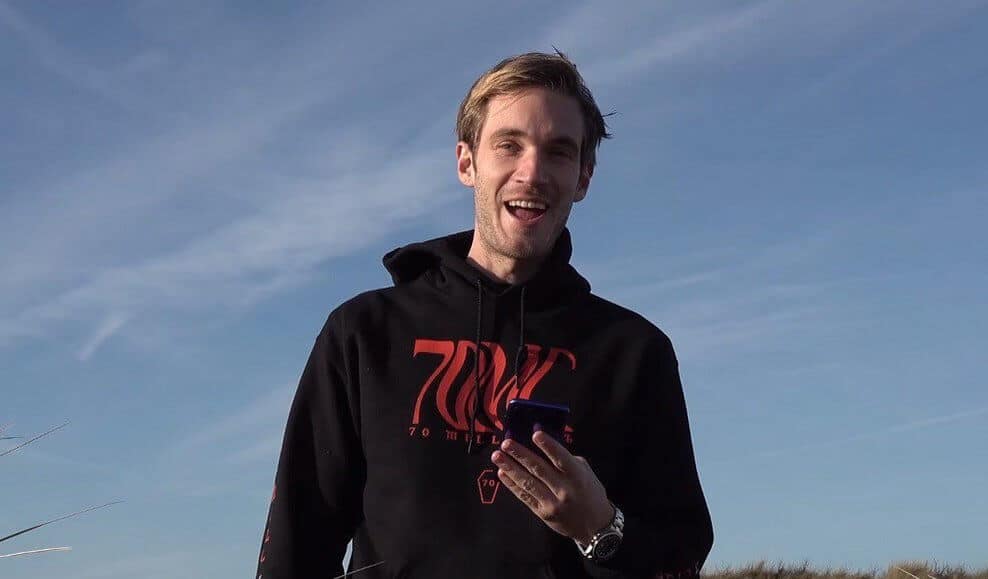 The world’s biggest Youtube celebrity, PewDiePie has started promoting American-based Gfuel to his enormous audience via his Youtube videos.

What energy drink does PewDiePie drink?

PewDiePie is in a paid partnership with Gfuel energy drink. PewDiePie features Gfuel in some of his videos and sometimes mentions the drink to his audience.

Gfuel is an energy drink powder that you mix together with water and it becomes a regular energy drink, similar to Red Bull.

Gfuel is based in United States and is available in a wide variety of flavors in both tubs and single-serving sachets.

How much does Gfuel pay PewDiePie?

This has not yet been made public, but it seems most likely that it is a regular commission-for-sales arrangement.

It’s also possible that Gfuel are paying PewDiePie a fixed amount to promote their drink, or that they may have even offered him a piece of the company in exchange to reach his huge audience.

Giving away a piece of equity isn’t something that would usually happen, but in light of PewDiePie’s GIANT audience, it’s possible that was a part of the deal.

How long is PewDiePie’s contract with Gfuel?

No information about this has so far been shared. The partnership was announced at the end of 2018, and PewDiePie started actively promoting Gfuel to his audience in January, 2019.

How much does PewDiePie actually know about Gfuel?

Not much, it seems.

In the Youtube video above, PewDiePie mentions that Gfuel is a healthier alternative to other energy drinks without any reason as to why. If he had spent some time to study the ingredients he might not be so willing to put his name on that claim.

He says that he doesn’t know if it is true or not, but he usually “gets hyped” for 10 minutes after drinking an energy drink before that feeling goes away.

That’s quite interesting considering the fact that it will generally take at least 15 minutes to feel the effect of caffeine after drinking it.

PewDiePie’s sales pitch (around the 3:10 mark in the video) sounds a bit flat and scripted before he gets back to looking at imposter PewDiePie’s. Overall, the Gfuel commercial part of this video feels forced and unnatural, rather than believable and honest.

But hey, he wants to earn a commission, so who can blame him for promoting someone who is going to pay him some money?

Gfuel contains ingredients typical of most energy drinks despite being a powder that you need to mix with water before consuming.

The main ingredient, like most energy drinks is caffeine and Gfuel is highly caffeinated containing 150 mg of caffeine per serving.

However, there are plenty of stronger energy drinks available if that’s your thing.

Gfuel also contains 20 calories per serve and a bunch of other ingredients that are typical of other energy drinks.

Gfuel prices vary depending on how many you buy and where you live. Shipping prices are different for different regions.

The above prices are with the cheapest available shipping option on the Gfuel website if you live in the United States, but if you want to get your drinks quickly you’ll need to pay even more for shipping.

Personally, I think the best place to buy Gfuel is on Amazon. You can often find some good deals and shipping is usually fast.

On the other hand, REIZE has free shipping and you won’t need to wait too long for it to arrive.

Gfuel ships from the United States.

That’s great if you live in the United States, but if you live in any other country it means that you’ll need to be fairly patient with the shipping time. I previously bought some Gfuel and had it shipped to an Australian address and it took around 3 weeks to arrive.

Even in the US, shipping isn’t very cheap. If you live elsewhere you might find the shipping cost to be a rude slap in the face.

Gfuel certainly market their drinks as a “healthier alternative”, and their paid influencers are happy to spread that message too.

But, the truth is that Gfuel does contain artificial ingredients along with a long list of ingredients that make it very similar to any other energy drink that you might find.

Gfuel isn’t any better or worse for you than any other energy drink, despite their “healthier alternative” claims.

Its worth remembering to go easy on any caffeinated products to avoid any potential health issues.

Having tried Gfuel myself, I can tell you that it does work.

In fact, it works too much.

It absolutely blew my head off with it’s 150mg of caffeine, and not in a good way.

I wasn’t able to concentrate or think clearly for an extended period. Sure, I was wide awake, but what good is that if you aren’t able to remember what someone said 2 sentences ago because you’re too wired?

Gfuel is good, albeit a little too highly caffeinated for my liking.

But why limit yourself to just one energy drink, especially when it is a bit on the expensive side?

There are plenty of awesome energy drinks out there just waiting to be tasted if you have an open mind.

Here are a few of my favorite ones…

I might be somewhat biased, but in my humble opinion an even better option than Gfuel is REIZE Energy Drink.

In addition to giving a much better energy boost without any noticeable crash, REIZE is also considerably more affordable than Gfuel.

Give REIZE a try today and you might even find that you prefer it to Gfuel.