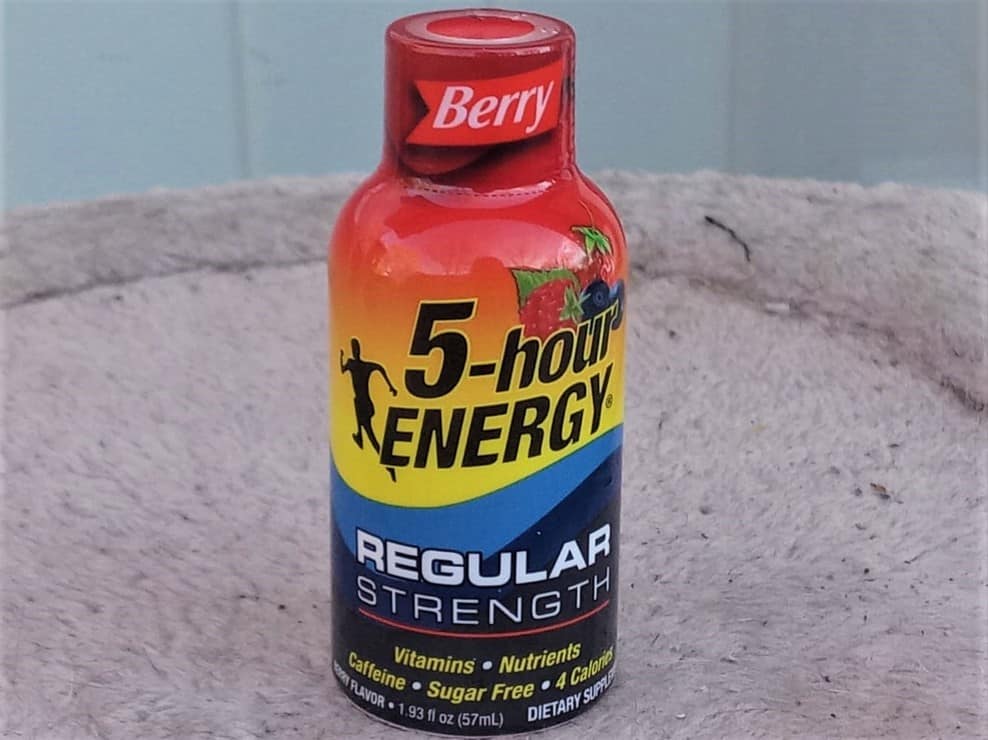 5 Hour Energy Shots are suitable for when you need a lot of energy in a short amount of time. Giving you 200mg of caffeine in just 1.93 fl.oz, a shot of 5 Hour Energy is sure to get you raring to go.

That said, are 5 Hour Energy Shots vegan though?

The short answer is that 5 Hour Energy is vegan-friendly. Based on 5 Hour Energy’s website, which states that there are no animal products included in 5 Hour Energy, which is as much of a vegan green light you’re likely to get.

For a more detailed look at each the individual ingredients of 5 Hour Energy and whether or not they’re suitable for a vegan diet, stick around for a deep-dive.

Let’s get into it…

Here are the ingredients of 5 Hour Energy, with a more detailed discussion of each below:

Are The Ingredients In 5 Hour Energy Vegan?

Now that we know what ingredients go in a 5 Hour Energy Shot, let’s go through each of them, and determine if they’re vegan.

While the ingredients in 5 Hour Energy appear to be vegan, at least based on PETA’s animal-derivative ingredients list, there are a handful of ingredients that might have some questionable origins.

L-Tyrosine is an amino acid that is naturally produced in the body. It can provide some notable benefits, such as improving your mental performance during stressful situations.

As for how vegan L-Tyrosine actually is, PETA has said this on the matter:

So, while L-Tyrosine is often sourced from plant or synthetic sources, there is the off-chance that it might come from animal sources as well.

Now from a health perspective, exactly where the amino acid comes from may not really matter much.

But if you happen to be an ethical vegan, the possibility of the L-Tyrosine content being sourced from animals might leave you in a bit of a pickle.

Even so, it’s pretty safe to assume that the L-Tyrosine content in 5 Hour Energy is sourced from plants or synthetically made, so there’s really not much to worry about.

But if you want more clarity, contacting the manufacturer directly is the best way to go to find out if a particular ingredient happens to be vegan-friendly or not.

As most Taurine is synthetically made, it’s safe to assume that the Taurine in 5 Hour Energy Shots is most likely vegan as well.

Taurine is a pretty common ingredient that is found in many energy drinks such as Red Bull and Rockstar.

While natural taurine primarily comes from animals, most taurine found in commercial foods these days are synthetically made at a relatively cheap cost.

So it’s pretty safe to say that the taurine found in 5 Hour Energy Shots are more or less vegan-friendly.

How Much Caffeine Is In 5 Hour Energy?

Every 1.93 fl.oz shot of 5 Hour Energy has 200mg of caffeine, which is quite a lot when considering the drink’s tiny volume.

Personally, I prefer somewhere between 50 to 100mg of caffeine per serving for my caffeinated drinks, so 5 Hour Energy Shots have a lot more caffeine than I would usually like.

If you happen to be caffeine-sensitive, it’s probably best to stick with regular energy drinks with a lower caffeine concentration, as downing 200mg of caffeine in such a short period may be a bad idea.

Of course, if your caffeine metabolism is up for it, downing a shot of 5 Hour Energy is definitely quicker and more convenient than having a regular can of energy drink, which usually takes a bit longer to drink.

That said, even if you have a high caffeine metabolism, the FDA recommends that you only have a maximum of 400mg of caffeine in an entire day.

Any more than that might lead to notable side effects:

Given the 200mg caffeine content per 5 Hour Energy shot, you really shouldn’t have more than two shots of 5 Hour Energy in any day, even if you think you need it.

Does 5 Hour Energy Have Sugar?

As zero-calorie sweeteners, both ingredients won’t have a nutritional impact on your diet, which is great.

So, as long as you don’t overdo it on the 5 Hour Energy Shots, you should be perfectly safe from any potential side effects.

Food containing gluten in them is only a serious problem if you happen to have celiac disease.

For most people, you’re not going to have any adverse reactions to having gluten in your food, though some studies claim that having a gluten-free diet is healthier for you.

For more information on gluten and its effect on your diet, take a look at the video below:

As 5 Hour Energy doesn’t contain any sugar or other complex carbohydrates, it’s perfectly suited for a keto diet.

The Keto Diet is a low-carb, high-fat diet that offers plenty of health benefits, such as weight loss and general health improvements.

As there aren’t many carbs in 5 Hour Energy, it should be perfectly suitable for a keto diet.

That said, if you need something a little more thirst-quenching, take a look at the article I’ve written specifically on the best energy drinks for a keto diet, for a bunch of low-carb, zero-calorie energy drinks that won’t break ketosis.

So here’s the final answer. While 5 Hour Energy Shots aren’t officially vegan-certified, it should be perfectly fine to have one even if you’re vegan.

Considering that the official 5 Hour Energy website itself states that 5 Hour Energy Shots don’t contain any animal additives, it’s pretty safe to think of them as vegan-friendly products.

Of course, if you want some definite peace of mind, there are plenty of other vegan-certified energy drinks out there for you to choose from (check below for some other options).

But if you’re looking for a quick boost, you can’t go wrong with 5 Hour Energy Shots.

5 Hour Energy Shots have a pretty decent variety of flavors considering its standard 1.93 fl.oz volume. Here are a few of them:

If you don’t think 5 Hour Energy Shots are the best thirst-quenchers, here are some other energy drinks that offer a lot more volume while also being vegan-friendly:

REIZE also contains a smart blend of taurine, ginseng, and B-group vitamins (all from vegan-friendly sources), which work in combination with the caffeine to give you the perfect energy boost, without the crash afterward.

Best of all, you can get REIZE shipped straight to your door for only about $1 per drink.

Give REIZE a try and I’m sure you’ll agree that it’s a smarter choice than 5 Hour Energy Shots.

link to Can You Drink 5 Hour Energy Every Day? (The Truth)

5 Hour Energy Shots give you all the energy in a fraction of the drinking time, which is pretty good when you're in a hurry and don't want to crack open a full can of energy drink. But is it safe...

Need a quick energy boost but don't feel like downing a 16 fl.oz energy drink? 5 Hour Energy Shots have you covered, delivering all the potential of an energy drink in a 1.93 fl.oz, sugar-free...