If there ever was a designer energy drink, it’s got to be Shine Drink. With its sleek look bottle, shift in target audience and slogan, it’s an Instagramers dream come true. But does Shine+ tick the right boxes? And is it really a smart drink?

Shine+ is one of the newest additions to the beverage market. With a self-professed title of ‘Australia’s first smart drink’ and the shift in focus from the traditional male-orientated energy drink market, Shine+ promises to boost your performance and focus concentration levels (something energy drinks also promise to do). They are also seeking to differentiate themselves from market leaders, V energy drink.

Shine Drink was founded by Stephen Chapman and Dr Sam Prince in 2015 off the back a number of studies backing certain ingredients and compounds which enhance brain function. Thus the marketing slogan of Shine+ being Australia’s first smart drink was born.

The drink is also advertised as being ‘Nootropic‘. What does this mean? Nootropics are defined as compounds that enhance mental performance, memory recall or learning capabilities with no negative side effects. Something, once again, that most energy drinks also promise to deliver.

So does Shine Drink differ that much more from a can of Red Bull or Mother Energy Drink? Is there really a difference between this ‘smart drink’ and other energy drinks?

Or is it a case of some smooth marketing? 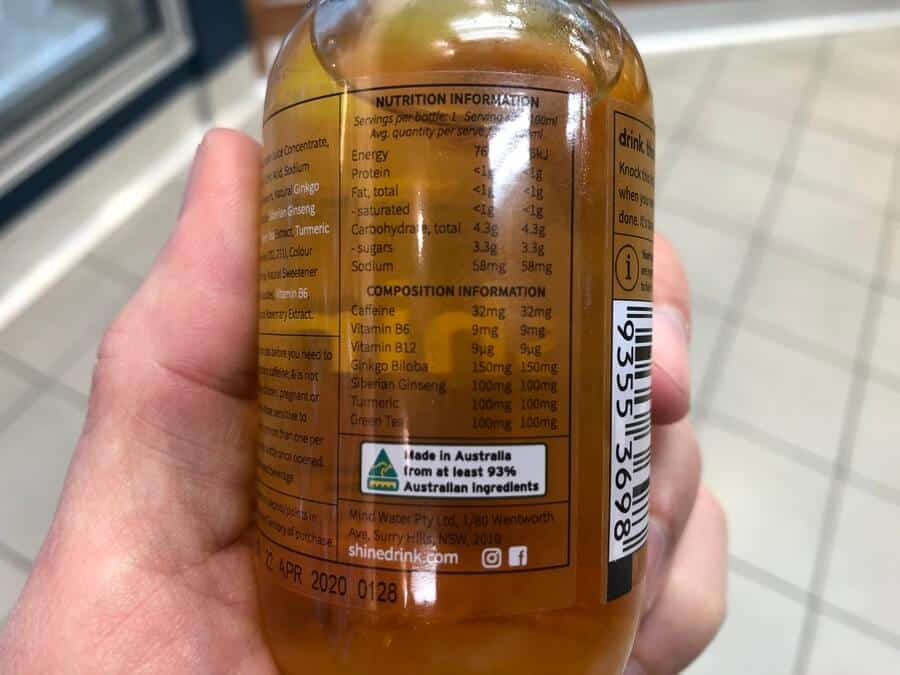 The nutrition information on a bottle of Shine drink.

On first glance, the nutritional label above shows us a low fat and sugar content in Shine Drink. The nutritional label focuses on 7 main ingredients, much like the website. Despite this there are artificial additives, like certain preservatives and flavourings which are present in the drink.

These additional components are listed on the actual bottle in the ingredients section, just above the nutritional label. 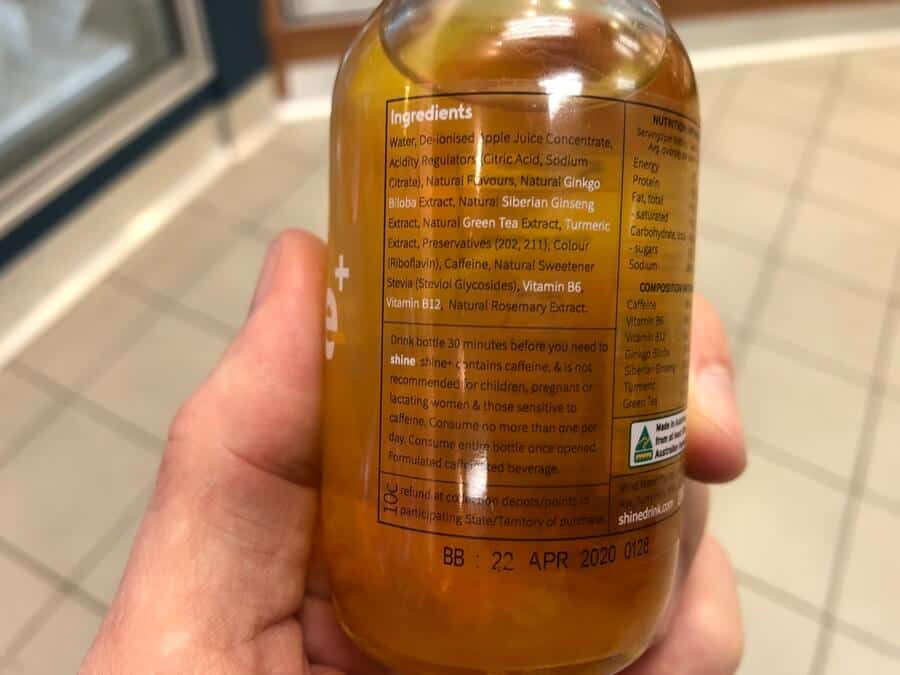 The ingredients listed in Shine drink.

Let’s break down some of these great and not so great elements.

• 4.3 grams of carbohydrates (all from sugar)

A common, if not compulsory addition in energy drinks, Caffeine, also appears in Shine Drink. The difference here is that Shine+ has a substantially smaller portion (less than half) of caffeine present compared to Red Bull’s smallest can, at only 32mg of caffeine.

To put this in perspective the average cup of coffee contains 95mg .

Generally added to energy drinks because of the way it affects the body (like Adrenaline), caffeine stimulates the central nervous system (CNS), heart, and muscles.

Once we consume caffeine our breathing and heart rate increases, leading us to experience a short burst of physical energy. This then leads to the feeling of being more awake and can sometimes suppress hunger, a feature which is emphasized by Shine+ and appeals to its young women demographic.

Ultimately, caffeine is a standard feature across all energy drinks. 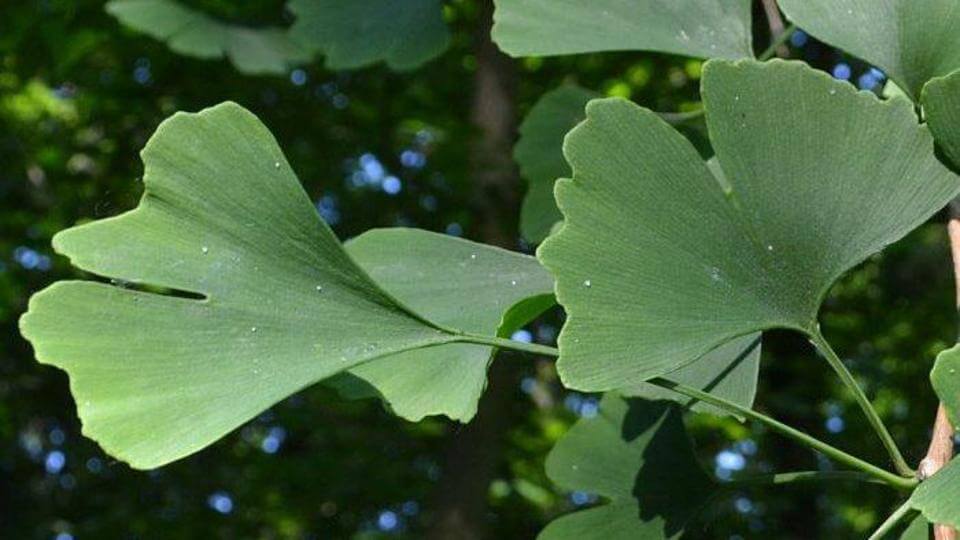 Ginko Biloba is found in Shine+.

One of the primary active ingredients found in Shine+ is Ginkgo Biloba, which once again, plenty of energy drinks contain, including Vegas’ fan favourite, Rockstar.

There are more than 40 components in ginkgo, 2 of which are primarily used for their commonly recognised health benefits. These main 2 components are Flavanoids; plant based antioxidants which can improve heart health and Terpenoids; which dilate blood vessels and can lead to better blood flow.

Studies suggest that ginkgo assists with cognitive functions including thinking, learning and memory. At the same time however, there have been conflicting studies that have also disapproved the use of gingko as a treatment for diseases like Alzheimer’s and Dementia. Although ginkgo has had conflicting findings on its effectiveness as an ingredient used to improve/treat cognitive functions, many energy drinks (and Shine+) continue to include it in their make up.

Commonly associated with its anti-inflammatory properties, curcumin is also a potent antioxidant.  This in turn boosts the activity of our body’s own antioxidant enzymes.

Similarly to ginkgo, curcumin is also associated with improving memory and has been linked to lowering risk of brain diseases. Once again these associations have only been drawn through preliminary testing’s and are not conclusive. Another factor which may dampen the effects of curcumin is the poor absorption rate of it by our bodies. Although a seemingly healthy inclusion, we probably wouldn’t absorb enough curcumin through the drink alone, to harness the potential benefits. 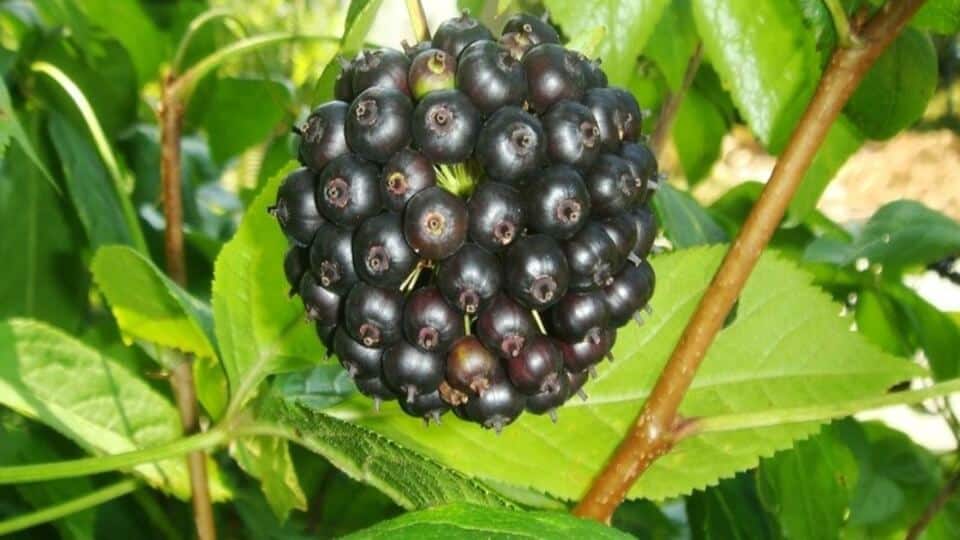 Siberian Ginseng as you’ll find it in the wild.

Due to its energy boosting properties, Ginseng is commonly found in most energy drinks. Shine+ uses Siberian ginseng, which is different from other commonly used ginseng species; like Korean and American ginseng.

Ginsenosides, which are found in Siberian Ginseng, regulate the manufacture and secretion of adrenal hormones and strengthens the adrenal glands. Alongside this, Siberian ginseng has been found to enhance mental performance, speed up reaction time, improve learning and memory and sharpen vision as well as strengthening hearing.

Although there are extensive benefits associated with the consumption of ginseng as a whole, Siberian ginseng it is NOT recommended for children under 12, women who are breastfeeding or pregnant or for anyone who has high blood pressure. This preventative measure is also recommended by most energy drink companies because of the similar nature of their ingredients.

Most energy drinks come bearing plenty of b vitamin gifts, which is great considering they need to be replenished daily as they are water-soluble vitamins.

Falling into two categories, vitamins are either fat soluble or water soluble.

Fat-soluble vitamins include A, D, E, and K – they dissolve in fat and can be stored in your body.

C and B-complex vitamins are water soluble as they need to dissolve in water before your body can absorb them. Because of this, your body can’t store these vitamins and whatever is not used is passed through your system and into the toilet on your next visit.

Shine Drink contains B6 and B12 vitamins which are both helpful in replenishing such water-soluble vitamins and maintaining mood and reducing fatigue.

B6 – Is necessary for proper brain development and function. It also produces the hormones serotonin and norepinephrine, which can improve your mood.

B12 – Keeps your nerves and blood cells healthy. It is necessary for the optimal functioning of numerous critical body processes.

REIZE energy drink in comparison contains B6 plus B1, B2 and B3.

B1 – Also known as Thiamin, vitamin B1 can help to boost your immune system and increase athletic performance.

B2 – Helps release energy from foods…which is an awesome energy boost buddy which is also found in REIZE.

B3 – Also known as Niacin, vitamin B3 is crucial in metabolising foods and producing energy. It can also lower cardiovascular risks. 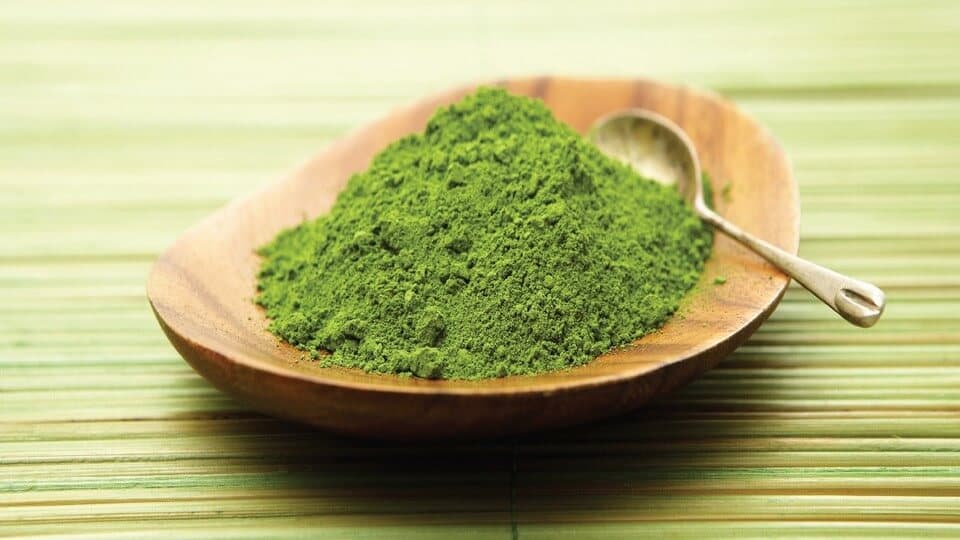 Loaded with antioxidants and nutrients, green tea extract helps the body run more efficiently which is why…bingo, you got it; plenty of energy drinks as well as Shine+ include the extract.

Some health benefits that have been associated with green tea extract consumption include improved brain function, fat loss, killing bacteria and lowering the risk of developing multiple diseases.

Does this heading seem a little out of place to you too?

Shine+ has a great combination of ingredients which sees the drink marketed as being a natural and healthy drink, however the addition of artificial preservatives and flavours really does bring Shine Drink over to the energy drink category and make their “all natural” claims questionable.

While the food additive 202 is naturally occurring in some berries, it is almost always synthetically produced for inclusion in food and drink products.

Preservative 211 found in Shine+, is also known as Sodium Benzoate. Widely used in acidic foods such as salad dressings, carbonated drinks, jams and fruit juices and condiment, the preservative is also used in medicines and cosmetics.

Similar to the additive just mentioned, food additive 211 is naturally occurring in some berries and dairy products, but is produced synthetically for most food and drinks.

Preservative 211 is generally harmless in small quantities, but a worrying study on college students in the US found that sodium benzoate (preservative 211) is linked to increased hyperactivity.

Although such preservatives and flavours are commonly used within the food industry, the concept of the drink being all natural may mislead customers into thinking Shine+ does not contain these.

Although distinguishing itself from the energy drink industry through its marketing, Shine drink’s ingredients and notions still fit within it. So what energy drink gives you the most bang for your buck?

A bottle of Shine Drink is 110ml, a pretty small size in comparison to most energy drinks. The drink proves to be on the pricey end of the scale retailing at just under $6 in store.

In fact plenty of energy drinks offer similar ingredients at better prices and in bigger quantities.

The base ingredient of Shine plus is de-ionised apple concentrate, which is what gives the drink its 4.5g/110ml sugar content and prominent apple flavour.

No other sugar is added, unlike some energy drinks on the market.

Shine Drink’s function geared ingredients means you don’t get the overtly sweet artificial flavour you can get when drinking some energy drinks.

Personally, I don’t think it tastes great, but I don’t like the taste of ginger. I find it way too “bitey”. However, taste is very personal and there are obviously people who think it tastes nice.

The team at Casa De Karma had a few differing perspectives on the taste of Shine+ and gave some Shine drink reviews.

“I guess in trying to sum it up, I would say it is a bit of a healthy and natural version of Red Bull.” Carla

“It was pleasantly sweet and I liked the little kick of ginger after each sip.” Erin

“Other energy drinks that I’ve tried are extremely sweet and chemically tasting, this had none of those characteristics. It tasted more fruity and herbal than chemical.” Alison 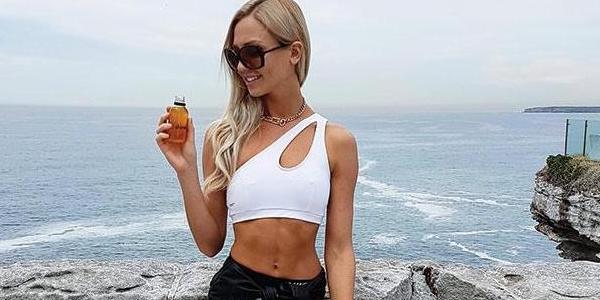 For one it’s aimed at active and health conscious women. This is reflected in the design, bottle size, custom shaped bottle and active ingredients.

With most of the ingredients promoting improved brain functioning and energy as well as the exclusion of added sugar Shine+ has created a product specifically targeted to health-conscious women.

Traditional energy drink companies often try to sweeten the deal and focus on the taste by adding sugar. This extra sugar effectively reverses any possible health benefits from any beneficial ingredients in the drink, but drinks like Shine+ and REIZE let their ingredients do that talking.

Containing no sugar, REIZE energy drink, focuses on beneficial ingredients rather than artificial additives. These include Niacin, Vitamin B1, B2, B6, Caffeine, Taurine, Ginseng and Inositol.

A great addition to the beverage market, Shine+ has a plethora of healthy additions and is housed in a sleek little bottle. The product does fall into the energy drink category, despite their best efforts to stand apart from the likes of Red Bull and V.

Depending on what you’re looking for, it can be a slightly more natural boost compared to other energy drinks on the market, although for many of us maybe more of an occasional treat due to the expensive price tag attached to a bottle of Shine+.

Give REIZE a try today and you might just find that you prefer it to Shine drink.