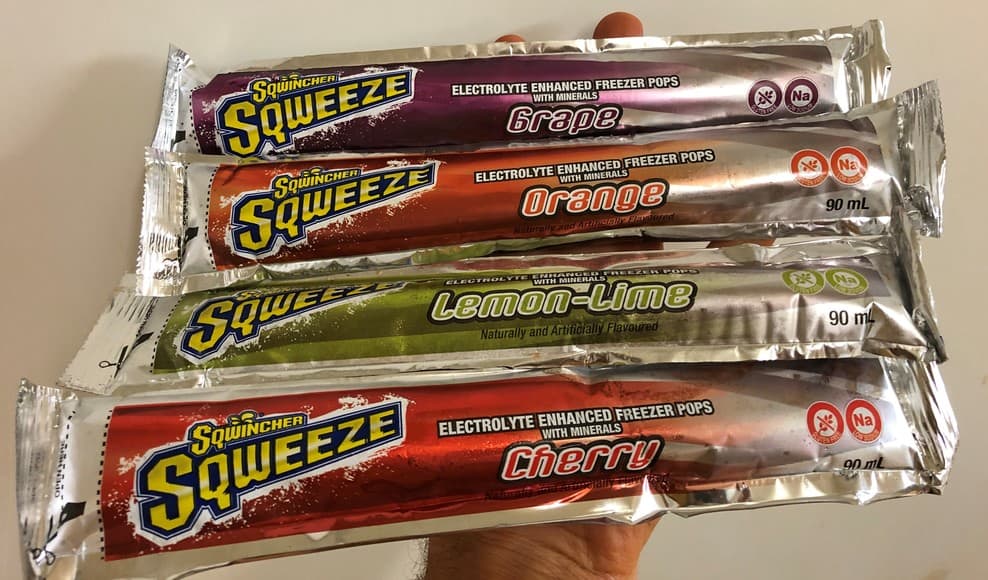 Today, we’re taking a detour from energy drink country into something a little different. How does a hydrating freezer pop full of electrolytes sound for a change?

If you’re here, you’re probably wondering about my opinion on Sqwincher Sqweeze Pops and how well they work.

For the short answer, Sqwincher Sqweeze Pops gets an 8 out of 10 from me. While it’s not an energy drink, it’s great for some quick hydration, though the original has quite a bit of sugar.

For a more detailed response, read on to find out everything about Sqwincher Sqweeze Pops, from its ingredients and nutrition info and everything in between.

Sqwincher Sqweeze Pops are one of the many products from sports drink company Sqwincher. Unlike a typical energy drink, they are more suitable for rehydrating the body and replenishing lost electrolytes during a hot day.

Their Amazon page describes them as:

From what I can tell, they’re pretty great for cooling you down and relieving heat stress, but not so much for giving you energy.

Here are the typical nutrition values of a single 3 fl.oz serving of Sqweeze Pop—both Original and Zero (sugar-free):

A quick burst of calories during a sporting event or a day under the hot sun would be greatly beneficial for you in preventing you from falling flat on your face due to heatstroke.

For reference, the recommended daily calorific limit for healthy young adults ranges from 2000 to 2400 calories for women and 2400 to 3000 calories for men.

Having only 20 to 45 calories (depending on which version you get), Sqweeze Pop wouldn’t negatively impact your diet in any significant way, so it’s great if you’re trying to stay in shape and hydrated at the same time.

On the other hand, if you’re looking for a drink to help you actively lose weight, I’ve written an article on the best energy drinks to burn fat, which might interest you.

That said, the calorie count in Sqwinchers shouldn’t be that worrying so long as you don’t have too many of them in one go.

Now that we’ve got the basic nutritional information of Sqwincher Sqweeze down, let’s dig deeper and have a look at its ingredients:

Unlike energy drinks, Sqwincher Sqweeze contains zero traces of caffeine and will not have an effect on your caffeine limit if you happen to enjoy coffee or energy drinks.

In terms of caffeine, it would be important to note that the FDA approves a caffeine intake limit of no more than 400mg per day.

In reference to that limit, a Sqwincher Sqweeze Pop contains no caffeine at all so it’s relatively harmless for you to have one alongside an energy drink, or a cup of coffee.

Despite the lack of caffeine, it doesn’t mean that you can’t rely on a Sqwincher Sqweeze for a quick focus boost or aid to help you stay awake, although it really isn’t meant to be that sort of product.

However, if you need some quick hydration, then Sqwincher Sqweeze is made for just that and is probably one of the better options on the market.

On a different note, if you’re new to energy drinks, take a look at this article where I explain the best way to choose the right energy drink for you.

Though I’ve already warned you about the dangers of sugar, in some cases, sugar can be beneficial—especially in a situation where you’re burning off more calories than usual.

If you somehow find yourself in a state where you have low blood sugar, a serving of Sqwincher Sqweeze will quickly return your sugar levels to normal.

Still, the AHA recommends that the daily added sugar limit for men and women should be capped at 25g and 36g respectively.

While it’s fine to go over the sugar limit every now and then, having too much sugar consistently can lead to some nasty health problems, such as:

Therefore, I wouldn’t recommend having too many sticks of Sqwincher Sqweeze, as they have a fairly high sugar-to-volume ratio. While one might revitalize you, a few too many might just make you sick.

If you happen to be diabetic, Sqwincher Squeeze Zero is the sugar-free version, so you can go for that instead and still stay hydrated on the go without risking an increase in blood sugar levels.

One of the biggest selling points of Sqwincher Sqweeze (and sports drinks in general) is the electrolytes present in it.

Electrolytes consist of sodium, potassium, and few other mineral salts. They do a great many things within your body, such as:

Your electrolyte balance within the body greatly depends on how much water you gain or lose throughout the day, which is why it’s pretty essential to replenish them if you’ve been losing water through vigorous activities.

For more information on electrolytes and what they actually do, take a look at the video down below:

You’ll be pleased to know that Sqwincher Sqweeze is Gluten-Free and contain no products relating to wheat, barley, or whey.

Generally, a gluten-free diet is necessary only if you have celiac disease. For the rest of us, gluten-free stuff may provide some possible health benefits, though the research doesn’t really say much on that subject.

In any case, a Sqweeze Pop shouldn’t contain any gluten, so it would be safe for you even if you’re avoiding gluten. However, I would still recommend that you consult a health specialist if you’re unsure about the subject.

In terms of hydration and cooling, Sqwincher Sqweeze works in a pinch—its mix of sugar and mineral salts effectively returning your fluid level back to normal.

Even then, each serving of Sqwincher Sqweeze only holds 3 fl.oz, so while it may work in the short-run, you’re going to need a lot more liquid in order to replenish the water you’ve already lost.

So you might want to look somewhere else if you want an alternative for your sports or energy drink.

While Sqwincher Sqweeze definitely works, consuming too many can and will lead to a swing to the negatives, causing an excess of electrolytes within the body instead.

Considering Sqwincher Sqweeze works to replenish electrolytes by giving you more mineral salts, it’s highly likely that having too many in a short period of time will turn the electrolyte deficit into an electrolyte excess.

Too many electrolytes may lead to negative health issues, such as:

Electrolytes mostly affect your muscles and nerve system, so having too many of them can lead to some involuntary twitchiness and other related issues.

Still, as long as you have Sqwincher Sqweeze in moderation, it’s perfectly safe for consumption without the need for you to worry too much about its possible side effects.

If you’re a fan of variety, you would be glad to know that Sqwincher Sqweezy Pop comes in a wide range of flavors. Here are a few of them:

Sqwincher Sqweeze is at its core a freezer pop. Texture-wise, it has a sort of slushy-like consistency akin to a flavored snowcone in a tube.

I personally find the taste of Sqwincher Sqweeze to be really refreshing, especially after a long day in the sun. Its fruity flavors are not sickeningly sweet with just the right amount of sweetness to it.

All in all, although it’s a solid freezer pop, Sqwincher Sqweeze is probably a lot healthier than the sugar ice lollies you often find on the beach.

These hydrating ice-pops are actually fairly pricy from a sheer price-to-volume ratio, which is worse if you intend to buy it from overseas

As a base of comparison, a 12-pack 20 fl.oz Gatorade costs $8.24 in total, which is equivalent to the cost of only about 5 sticks of Sqwincher Sqweeze.

Now that’s not to say you should never get a Sqweeze Pop, but it’s not something you can casually fork out the cash for either, unlike most other hydrating sports drinks or energy drinks.

If you live an active lifestyle or are out in the sun a lot, then a Sqwincher Sqweeze would still be a decent investment. However, its value dips pretty hard if you happen to be more of an indoorsy person.

Now, if you’re looking for a cheaper option, especially energy drink-wise, I’ve compiled a list of the best energy drinks for the money you’re more than welcomed to check out.

All in all, I give Sqwincher Sqweeze a pretty high rating: 8 out of 10.

Sqwincher Sqweeze is a great product for you if you’re looking for some quick hydration that comes with a variety of tasty and refreshing flavors.

While it won’t substitute your sports or energy drink of choice entirely, it’s a great pick-me-up for when you need to replenish your fluids and electrolytes fairly quickly.

But if you can afford it, Sqwincher Sqweeze will definitely serve you well for your hydration needs.

If you’re looking for other products that have electrolytes, here are some energy drinks that might interest you.

Though it might not be a refreshing freezer pop, REIZE will work just as well in a pinch.

REIZE is a convenient powdered energy drink that comes in a 4g sachet. With a sensible 50mg of caffeine, it’s completely sugar-free with only 11 calories per serving.

REIZE also contains a smart blend of taurine, ginseng, and B-group vitamins, all of which combine to give you the perfect energy boost without the sugar crash afterward.

Best of all, REIZE ships straight to your door for only about $1 per drink, which is great value for money, especially compared to Sqwincher’s relatively high price.

Try REIZE today, and you might find it a smarter option than Sqwincher.