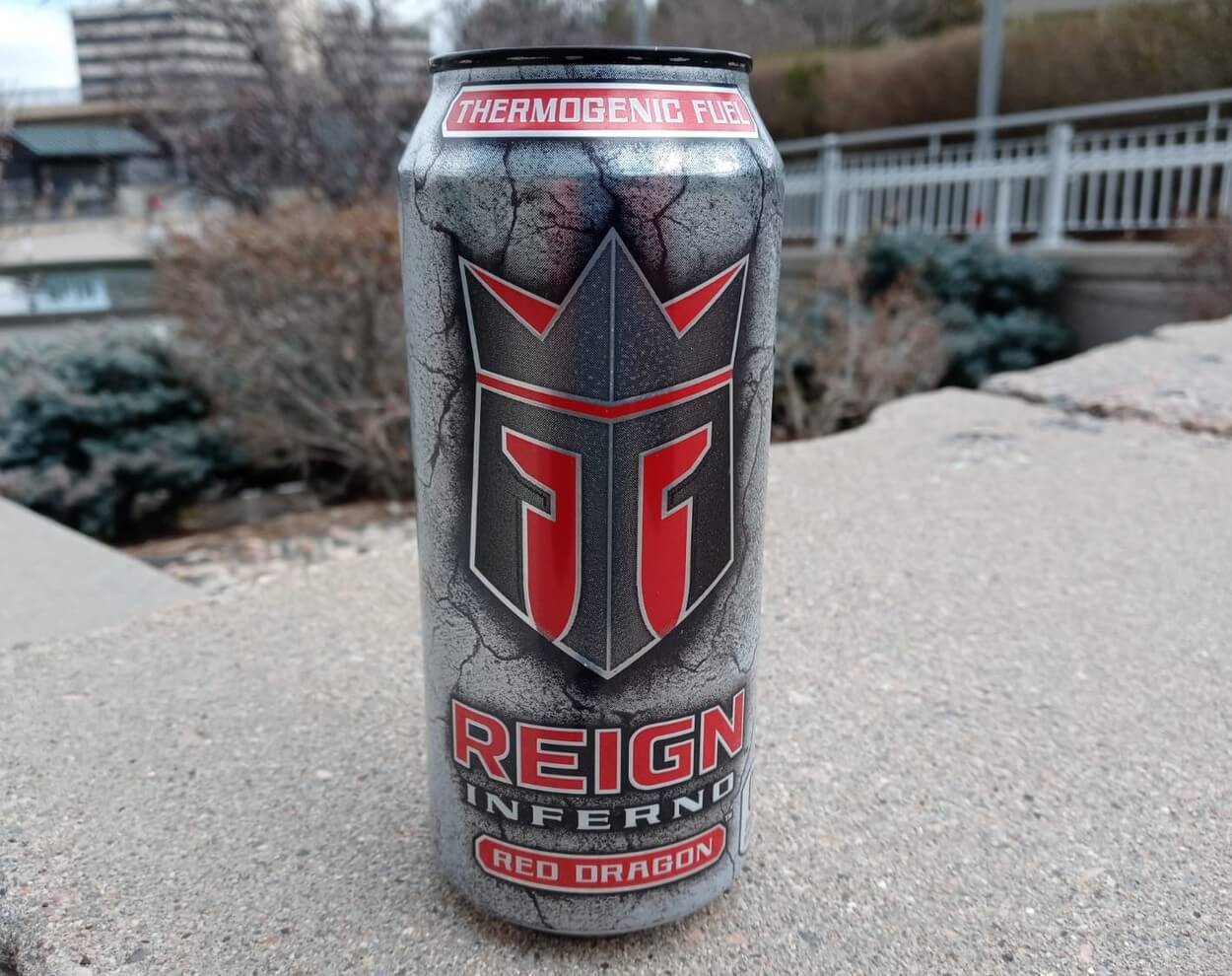 Marketed as a thermogenic fitness and performance drink, Reign Inferno Red Dragon is a great option if you exercise regularly, as it’s filled with ingredients that would complement your active lifestyle.

But it might make you wonder: How does it taste like? What does it exactly contain? Is it good for my health?

In short, Reign Red Dragon tastes like a fruit punch mixed with dragon fruit. It’s sugar-free and has 300mg of caffeine and 10 calories, along with a bunch of vitamins as well as amino acids.

For a more in-depth look, read on to find out everything on Reign Inferno Red Dragon, from its ingredients to whether it’s healthy for you or not.

But, if you’re more interested to know how the original Reign tastes and works, check out my review on Reign Energy for an in-depth breakdown of the drink.

First off, let’s go through the nutritional standards of Reign Inferno Red Dragon and see how they compare to some of its competitors:

How Many Calories Are In Reign Inferno Red Dragon?

A 16 fl.oz can of Reign Inferno Red Dragon has 10 calories, which is quite a small amount for an energy drink of its size.

If you’re looking for some low-calorie energy drinks, Reign Inferno Red Dragon certainly ticks out all the boxes. Its low-calorie nature would also mean that you wouldn’t need to make as many adjustments to your diet as you would with sugary energy drinks.

Plus, with only 10 calories, Reign Inferno Red Dragon wouldn’t put much of a dent in your overall diet.

For reference, the recommended daily caloric intake for healthy adults ranges from between 2000 to 2400 calories for women and 2400 to 3000 calories for men.

However, since Reign Red Dragon is low in calories, most of your energy comes from its caffeine, which isn’t enough to keep you sustained for a long time, especially if you’re doing lots of physical activity.

Plus, as it’s an energy drink, it can’t give you the nutrients that a regular meal can. So, if you’re feeling hungry, make sure to grab a nutritious meal instead of drinking another can of Reign Red Dragon.

With that being said, if you prefer to do away with calories completely, check out the article I’ve written on the best zero-calorie energy drinks for some good recommendations.

Here’s a list of the ingredients that can be found in a 16 fl.oz can of Reign Inferno Red Dragon:

How Much Caffeine Is In Reign Inferno Red Dragon?

A single 16 fl.oz can of Reign Inferno Red Dragon contains 300mg of caffeine, which are made from natural ingredients.

With 300mg of caffeine, Reign Red Dragon is one of the most highly caffeinated energy drinks in the market, alongside its other brands such as Bang and Raze.

Since it’s a workout energy drink, the whopping amount of caffeine within this drink can boost your alertness, as well as enhance your exercise performance and cognition.

My caffeine preference actually falls between 50mg to 100mg per drink, as that amount gives me a smooth boost without the overwhelming side effects. As such, Reign Red Dragon isn’t an energy drink I would actively seek out.

That said, if your caffeine metabolism is pretty high, you wouldn’t have much problem dealing with Reign Red Dragon, and could even make use of its benefits on your performance.

Of course, keep in mind that caffeine shouldn’t be consumed regularly throughout the day, as the FDA recommends a daily caffeine limit of 400mg for healthy adults. Any more than that, and you might experience adverse effects such as:

As such, you should stick to one can per day when you’re consuming Reign Red Dragon since its caffeine content is pretty close to hitting the daily limit.

In any case, be sure to moderate your intake of Reign Red Dragon properly, and try to avoid having other caffeinated beverages within the same day as you might accidentally over-consume caffeine.

Does Reign Inferno Red Dragon Have Any Sugar?

Reign Red Dragon tastes quite sweet due to the presence of an artificial sweetener, namely sucralose.

More information about sucralose will be included in the section below:

Sucralose gives food and drinks a sweet taste without the additional calories and carbs, as it’s a zero-calorie sweetener.

It’s also FDA-approved for general use, so you don’t have to worry about its safety. That said, it’s best to keep your intake of sucralose to a moderation as there are still some controversies regarding its long-term health effects.

Provided sucralose isn’t part of your meals every day, you should be completely fine though. Moderation is key.

For more information on artificial sweeteners, check out the video below:

Reign Inferno Red Dragon has a light fruity taste reminiscent of a fruit punch, combined with the sweetness of a dragon fruit and the refreshing fizzy finish of an energy drink.

While I’m not entirely sure if the distinct taste that I get from Reign Inferno Red Dragon is dragon fruit, I can’t really compare it to any other fruit I’ve tried before.

I actually quite like the taste of the drink, but it’s probably due to the fact that I like fruit-inspired energy drinks, so your opinions might differ from mine depending on personal preferences.

What I quite like about Reign Inferno Red Dragon is how refreshing and smooth it is, without leaving much of an aftertaste that’s often associated with energy drinks containing artificial sweeteners.

Considering its high caffeine content, Reign Inferno Red Dragon definitely works as an energy drink, as well as could provide you a powerful boost to keep you awake and going for quite a long time.

But its caffeine content might be too much for some people, myself included, to handle, which is why I give this drink a 7 out of 10.

With its high levels of caffeine and exercise-boosting ingredients, Reign Inferno Red Dragon can give you an extra edge in physical performance, improving your daily exercise routine.

Plus, it’s filled with lots of B vitamins and electrolytes, which could contribute slightly to your overall health and wellbeing. It also has an enjoyable taste that won’t overwhelm your taste buds.

That said, whether it’s completely effective in burning calories in the same way it was marketed, I can’t really guarantee that, as getting rid of your excess fat mainly depends on your own effort to exercise.

However, Reign Inferno Red Dragon does help you to burn more calories off by boosting your energy levels and physical endurance to help you push through your workouts for a longer time.

Of course, since this energy drink has a caffeine content, I wouldn’t recommend it to anyone who has a low caffeine tolerance. Furthermore, when drinking Reign Inferno Red Dragon, be sure to stick to only one can per day, as drinking more than one could put you over the daily caffeine limit.

If you’re still unsure about including Reign Inferno Red Dragon in your diet, make sure to consult a health professional first.

Reign Inferno Red Dragon is helpful in keeping you awake and improving your performance, but it’s not as nutritious as certain foods.

Like most energy drinks, Reign Red Dragon is just an energy booster and can provide you with some temporary benefits in terms of an increase in physical endurance and cognition.

That said, it’s not as nutritious and healthy as some foods like eggs, vegetables, and fruits. While Reign Red Dragon does contain some B vitamins and amino acids, it can’t supply ample amounts that your body really needs.

Plus, its high caffeine content won’t be beneficial in the long run, as you could even end up falling sick from overconsumption.

Ultimately, Reign Inferno Red Dragon can improve your performance and help you in certain areas, but in terms of nutrition, only a balanced diet can provide you with the nutrients you need to stay healthy.

Reign is great if you work out regularly, or simply have a high tolerance to caffeine. But, if you can’t handle that much caffeine, here’s a list of good lower-caffeine energy drink alternatives that you may like instead:

If you find Reign Inferno Red Dragon to be too strong in caffeine for your taste, REIZE might be the energy drink you’re looking for.

REIZE is a powdered energy drink that arrives in light and fitting 4g sachets. With a practical 50mg of caffeine, REIZE is sugar-free and holds only 11 calories in each serving.

Plus, REIZE is packed with a smart blend of beneficial ingredients such as taurine, ginseng, and B-group vitamins that, when combined, supply you with the perfect energy boost without the dreadful sugar crashes.

The best part is that REIZE ships to your doorstep for only around $1, which is amazing value for money.

Give REIZE a try, and I’m sure you’ll soon agree that it’s definitely a smarter choice than Reign Inferno Red Dragon.