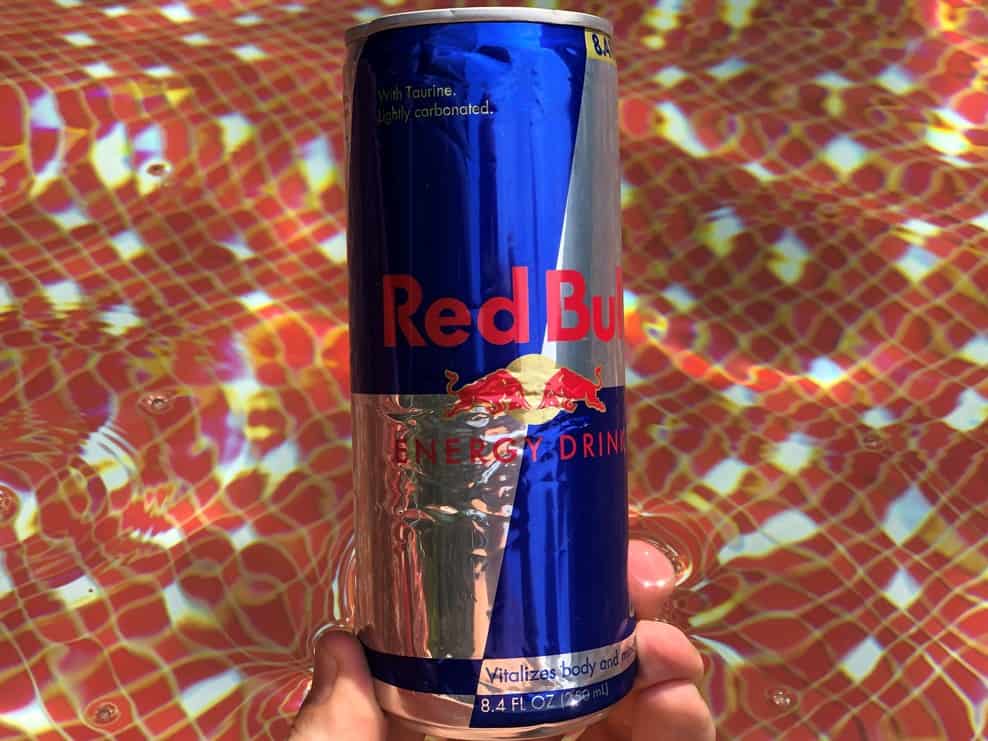 Being one of the most well-recognized energy drinks in the world, Red Bull has become the classic when you think of energy drinks. While nothing fancy, its classic blend of ingredients will definitely energize your day.

If you’ve found this article, you’re probably wondering what my thoughts are on Red Bull and exactly how it fares against its closest competitors.

In short, I personally find that Red Bull is deserving of its reputation as one of the best energy drinks on the market. It may not win any points for uniqueness, but it’s a classic that definitely works.

For a more detailed analysis, stick around to find out everything you’ve ever wanted to know about Red Bull Energy Drink, from its ingredients and nutrition facts to its taste and price.

With that out of the way, let’s get started with my Red Bull review…

Comparing the nutrition facts of Red Bull with some of its closest competitors.

A regular 8.4 fl.oz can of Red Bull has 110 calories, mostly due to all the sugar present in the drink.

While most energy drinks have started trending towards low-sugar or zero-calorie formulas, original Red Bull doesn’t shy away from its sugary roots, with its moderate calorie count being proof of that.

For reference, a healthy young adult usually needs a daily calorie intake of somewhere between 2000 to 2400 calories for women and 2400 to 3000 calories for men.

While 110 calories per can of Red Bull doesn’t seem like much, it can add up if you have too many cans in a day, so be sure to keep your Red Bull indulgence in check.

Of course, the benefit of having calories is that your cells will receive more energy to work, unlike zero-calorie energy drinks, which only give you a boost through caffeine.

But if you want something a lot healthier, take a look at the article I’ve written on the best zero-calorie energy drinks for some alternatives that work just as well as Red Bull.

There’s nothing particularly fancy about Red Bull’s ingredients, but here they are in the list below:

For comparison, an average cup of coffee contains about 95mg of caffeine per serving, which makes Red Bull a decent replacement for your morning coffee (if you don’t mind the extra sugar, of course).

Personally, I prefer somewhere between 50mg to 100mg of caffeine per serving, which I find is just enough to give me a nice boost, but not too much that I might get a headache afterward.

So, a can of Red Bull is perfectly suited for my taste, but depending on your caffeine metabolism, you might need something stronger for your standard energy drink’s effects to kick in.

You can certainly up the caffeine content with more cans of Red Bull, but keep in mind that the FDA advises a maximum caffeine intake limit of no more than 400mg per day.

Any more than that and you might experience some unpleasant side effects, such as:

If you experience any of the above, even if you haven’t hit the 400mg max limit, it’s probably for the best to cut down on your caffeine intake moving forward.

If you want to read more about caffeine overdoses and how it might affect you as an energy drink enthusiast, have a look at the article I’ve written on that.

An 8.4 fl.oz can of Red Bull contains 27g of sugar, which is a fairly moderate amount, equivalent to about 1.8 tablespoons of sugar.

Sugar is a quick and easy source of energy that is found in many energy drinks and soft drinks. It gives you a dopamine and mood lift that you often get after having something sugary in your system.

While Red Bull’s sugar content might seem a bit high, especially since most energy drinks tend to trend towards having less calories, you really can’t deny that it works.

Be warned though, the AHA sets a recommended daily sugar limit of no more than 25g and 36g of sugar for women and men, respectively.

As such, Red Bull’s sugar content is already slightly over the daily limit for women and is around 3/4 of the recommended sugar limit for men.

While the short-term effects of high sugar consumption might seem bad enough, such as the dreaded sugar crash, long-term excessive consumption of sugar may lead to even worse things, such as:

As with all sugary energy drinks, Red Bull might not be the best option if you plan to stay on the healthy side of things. But, if you have them in moderation, they’re sure to give you the boost you need to keep going for a few extra hours.

For more information on sugar and what it actually does to you, take a look at the video below:

Each 8.4 fl.oz can of Red Bull has 1000mg of Taurine included, all synthetically sourced.

Taurine is an ingredient that’s found in many energy drinks. It can provide various benefits, most notably helping nerve growth and also lowering blood pressure.

While Taurine has been noted to improve cognitive performances, research suggests that caffeine plays a much more prominent role when it comes to taurine and energy drinks.

While the taurine content in Red Bull has a rather strange urban legend surrounding its source, rest assured that the taurine found in Red Bull is synthetically made and doesn’t contain any animal products.

B-Vitamins are a key component in any energy drink, so it’s not surprising that it’s present in Red Bull as well.

Take a look at the table below for a more detailed look at the B-Vitamin content present in Red Bull, and click on the link here to find out more about B-Vitamins in general.

As an energy drink, Red Bull definitely works as advertised, giving you a nice boost in energy and focus that lasts for a few hours.

Red Bull mainly works through both caffeine and sugar, with the rest of the ingredients present complementing the effects of these two key ingredients.

Caffeine binds to the adenosine receptors in your brain, thus making you feel less tired, along with other stimulating effects such as improving cognitive ability.

As for the sugar, it serves as an easy source of energy for your cells, which you’ll definitely need if you’re going to be work late into the night or have low blood sugar levels.

In short, Red Bull most definitely works, although be aware that due to its sugary nature, you might find yourself on the wrong end of a sugar crash if you happen to have too many cans of Red Bull.

While mostly known for its world-famous original flavor, Red Bull actually does have a decent variety of flavors, including:

While Original Red Bull might be the benchmark, it’s worth giving these other flavors a shot if you’re looking for something new.

Regular Red Bull tastes pretty close to a soda mixed with medicine when you first try it, but at the same time has its own sugary tang to it. It seems to be a bit of an acquired taste. Many people don’t like the taste of energy drinks when they first try them, but grow to love them over time.

The best way to describe a Red Bull is as a carbonated, syrup-like concoction, although the flavor itself is definitely hard to describe.

As for its various flavors, they more closely resemble your usual energy drink and soda flavors. So, if you prefer something that’s more familiar to you, you should go for those instead.

If you want some other opinions on how Red Bull and its various flavors taste, have a look at this video:

A standard 12-pack 8.4 fl.oz Red Bull costs about $19, depending on where you get them, and if there are any shipping costs involved.

As far as pricing goes, Red Bull has a pretty average price for an energy drink, with a single 8.4 fl.oz can costing about $1.50, but you can sometimes get one for even cheaper if you happen to snag one during a sale.

A 12-pack of Red Bull certainly won’t break the bank, but be sure to only buy them when necessary, as the price certainly adds up over time.

Overall, I give Red Bull a solid 9 out of 10. While it’s a more classic approach to energy drink ingredients that may not gel with the times, you can’t deny that it’s an energy drink that works as advertised and sets the gold standard that others compare themselves to.

Red Bull is the most recognizable energy drink in the world for a reason, and it’s certain to give you the energy you need when and where you need it.

The sugar content in one Red Bull is already overwhelming as it is, so having too many cans over time may have a detrimental effect on your health. So, only have Red Bull only when necessary and you should probably go for either sugar-free Red Bull or other brands most of the time to spare yourself all that sugar too frequently.

Looking for something other than Red Bull for your energy drink needs? Here are some other great brands for you to try out as well:

On the other hand, if you prefer powdered energy drinks, these brands might be more your style:

I personally prefer energy drink powders because I find them to be a lot more convenient, versatile and they’re also usually a lot more affordable than their ready-to-drink counterparts.

REIZE is a delicious powdered energy drink that comes in convenient 4g sachets. Each sachet contains a sensible 50mg of caffeine, is sugar-free and has only 11 calories.

REIZE also contains many beneficial ingredients such as taurine, ginseng, and B-group vitamins. This smart mix helps to give you the perfect energy boost, without the dreaded crash.

Try REIZE today, and I’m sure you’ll agree that it’s a smarter choice than Red Bull.

link to Bang Vs Red Bull (All The Differences)

Ever wondered what the biggest differences between Monster energy drink and Red Bull are? We put the two famous energy drinks head to head here to help you decide which is better. What is Monster...