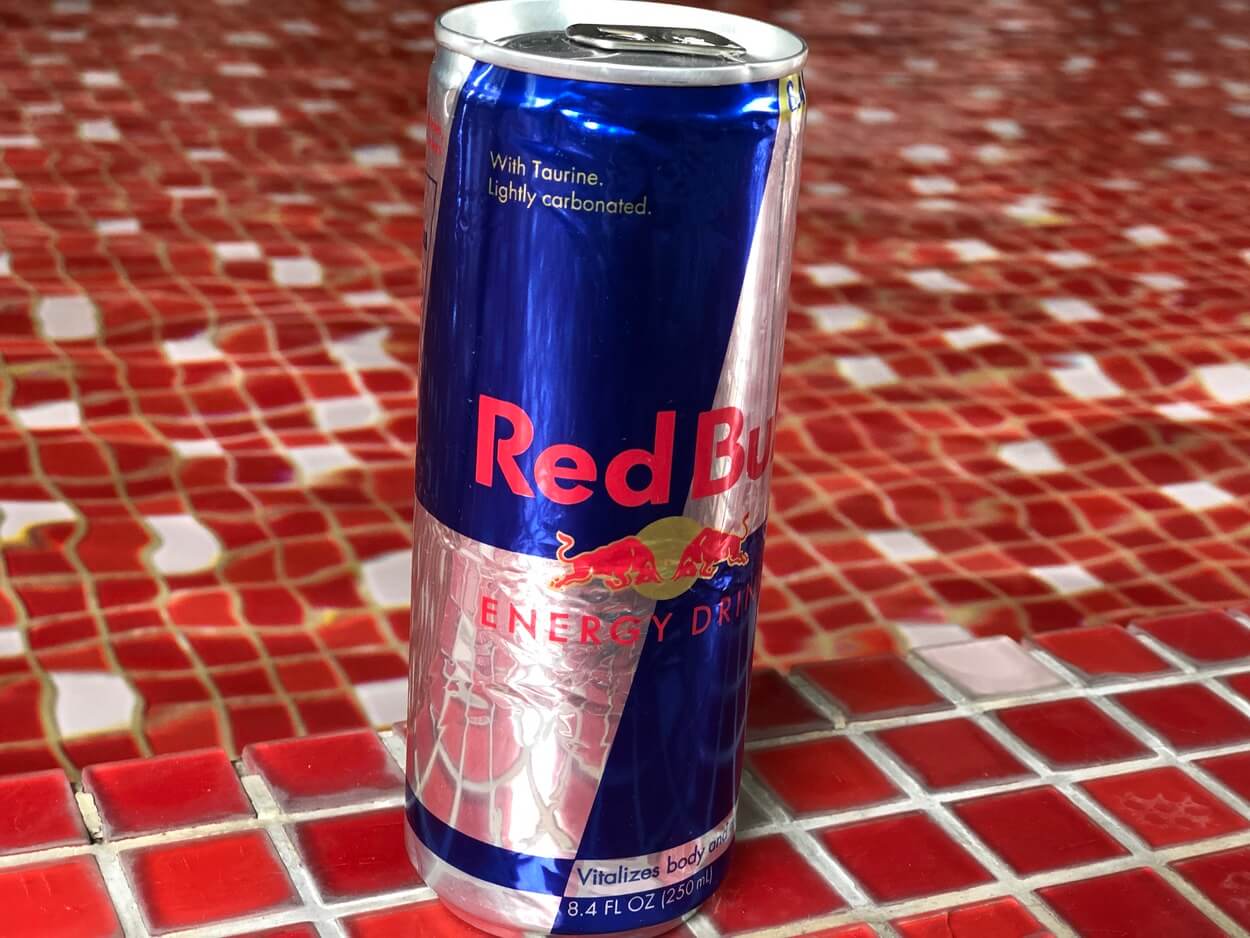 Red Bull is one of the top brands of energy drink in the market, being one of the first established drinks that gives you a refreshing blend that will surely energize you throughout the day.

Since you’ve arrived at this article, I’m assuming that you have lots of questions regarding Red Bull. Well, you’ve come to the right place as I’ll be addressing the general ingredients, nutrition, and the question of Red Bull’s origin.

For the short answer, Red Bull is not owned by Coke or Pepsi but is actually under an Austrian brand independent of both aforementioned companies.

Red Bull is owned by an Austrian billionaire named Dietrich Mateschitz. He got his inspiration as he traveled to different Asian countries, where he noticed people drinking caffeinated sodas to fight their jetlag.

Red Bull started small, but with perseverance, innovation, and creativity, its current popularity emerged and became the foundation of all the energy drinks available now in the market.

Red Bull earned $6.13 billion in its overall sales, and it is sold for over 171 countries around the globe.

Fun Fact: Red Bull only sells energy drinks. They make their market small to ensure the quality of the product that they are offering.

Is Red Bull Under Coke Or Pepsi?

Red Bull is an Austrian company. It’s not affiliated with Coke or Pepsi. In fact, Red Bull is the biggest competitor of Coke and Pepsi in the beverage market.

On the contrary, Coca-Cola and PepsiCo may have started producing caffeinated beverages as they saw Red Bull controlling the market itself.

PepsiCo started producing Rockstar, while Coca-Cola began producing its own energy drink, where Coca-Cola also has a fair share of Monster Energy.

Red Bull is a small company, but its dominance creates a huge impact in the market. It simply means that even if you are small, you can still compete with other big companies. Keep on working hard because it will pay surely pay off in the future.

Red bull is a manifestation of both focus and perseverance true to its slogan: give you wings to fly.

What Does Red Bull Offer?

Before we dive right into the nitty-gritty details of Red Bull, here are some of the vital nutrients of Red Bull:

Sugar is one of the energy sources of our body, being beneficial because it causes a surge of dopamine, leading to a lift of mood. That said, having 27g of sugar, the sugar content in Red Bull is considerably higher than average.

Note that the recommended sugar intake a day is only 25g for women and 36g for men. Consuming more than that can cause health problems like:

Looking at the sugar content in Red Bull, it exceeds the recommended daily added sugar limit for women and nearly exceeds the limit for men as well, which increases the likelihood of you experiencing sugar-related side effects.

Check the video out to understand more about risks of sugar brought by the drinks that you consume.

Calories are the energy that you get from the food that you consume. It’s beneficial because it assists you in the overall function of your body.

Given that number, Red Bull doesn’t give you much pain for its calorie content. However, having too much can a day definitely add up to your overall diet.

If you’d like to do without calories entirely, check out my article for the best zero-calorie energy drink for some great recommendations.

Having 80mg of caffeine in an 8.4 fl.oz can, the caffeine content of Red Bull is on the fairly average side compared to some of the stronger energy drinks.

Caffeine is a natural booster that helps your body overcome restlessness and improve concentration, which makes it a beneficial ingredient to have in an energy drink.

For reference, according to the FDA, the recommended caffeine consumption a day is 400mg. Having too much can cause unpleasant side effects such as:

Check this video out to rethink your caffeine consumption.

So be sure to moderate your Red Bull consumption.

If you are wondering what are the other things that Red Bull provides in your body. Here’s a quick look at its nutrition label:

What Are The Ingredients Of Red Bull?

The ingredients of Red Bull are pretty much standard compared to other energy drinks. Here is a quick look at the Red Bull ingredients:

In a regular serving of Red Bull, you can get 1000mg of taurine.

While there are rumors on the dubious source of taurine, fret not as the taurine in Red Bull is synthetically processed to ensure its quality, effectiveness, and standard.

Taurine is one of the primary ingredients of different energy drinks in the market. It plays an important role in your nerve growth and lowering your blood pressure level.

Another key component in every energy drink is B-vitamins. It’s one of the primary sources of energy that you get in every can you drink. And Red Bull also prioritizes this ingredient.

Here’s a table that summarizes the B-vitamin contents of Red Bull. If you’d like to learn more about B-vitamins, you can visit this website here for a detailed reference.

Red Bull definitely lives up to its promises, giving you an energy boost that can help you focus and concentrate for hours.

Red Bull’s ingredients play an important role in its overall effect, the caffeine, sugar, and variety of ingredients complementing each other to ensure that you get the boost you need.

Caffeine serves as an adenosine receptor in your brain, which helps you feel energetic and less tired. Its stimulating effect also helps you improve your concentration and cognitive ability.

With the sugar content of Red Bull, it gives your body cells energy, it being extremely beneficial when you’re working late at night or experiencing low blood sugar levels.

That said, it’s good to limit your daily consumption to one can because Red Bull has high sugar content and a pretty considerable caffeine content as well, which could lead to side effects if taken excessively.

What are the Available Flavors of Red Bull?

Red Bull is the top energy brand in the market and is well-known for its original flavor. Here is a quick list of all the flavors that Red Bull offers:

The original flavor of Red Bull serves its trademark. However, giving other flavors a try might also give you another level of taste in an energy drink.

How Does Red Bull Taste?

If you’re having Red Bull for the first time, you might have the impression that it tastes like soda with medicine mixed in it though you may have your own judgment for your first try.

If I were to describe Red Bull, I’d say that it’s akin to a carbonated yet syrup-like beverage, though I don’t have the exact words to describe its flavor except maybe that it’s sweet.

How Much Is Red Bull?

Red Bull can cost around $19 for a standard 12-pack 8.4 fl.oz, though it may vary depending on where you buy them and if there’s an additional shipping cost.

Its price is pretty on average, costing around $1.50 per 8.4 fl.oz. But, you can get these at a lower price, especially if you are lucky enough for sale.

Red Bull might not actually hurt your pocket. But, be sure that you only buy them when you need them. Regulating your consumption is also beneficial for your health.

REIZE is a powdered energy drink that can give you a boost with convenience. Its 4g sachet is packed with 50mg of caffeine and 11 calories. Plus, it’s sugar-free, which means that it won’t cause a dent in your diet.

REIZE is composed of beneficial nutrients that can be at par with the Red Bull, having a special blend of healthy ingredients like taurine, ginseng, and B-vitamins, which can give you the perfect energy boost without the crash afterward.

Besides that, with only $1 per sachet, you can get REIZE shipped straight to your doorstep, which makes it perfect if you have a tight budget.

So try REIZE today, and I’m sure you’ll find that it’s a perfect choice over Red Bull.

Best Energy Drinks for Migraines (Drink The Pain Away)
← Previous
How Much Did Pepsi Pay for Rockstar? (Truth)
Next →