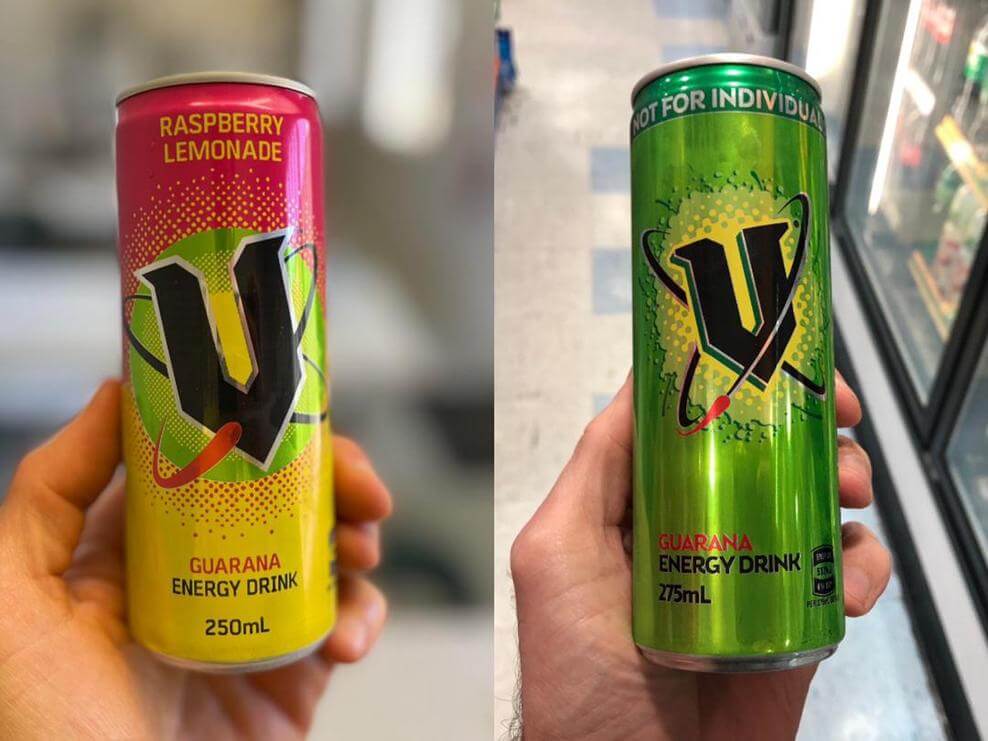 If you’ve tried the Original Green V but want to explore more of its flavours, would the Raspberry Lemonade V tickle your fancy?

Raspberry Lemonade V offers a fruity version to the energy drink, but in terms of benefits and energy-boosting properties, it isn’t that much different than Original Green V.

That being said, what exactly is the difference between the two?

If you wish to know more about Original Green V, take a look at the V Energy Drink Ingredients and Nutrition article I’ve written.

Otherwise, hang around for a more in-depth answer to determine which flavour of V Energy is better for you by exploring their ingredients, sugar content and overall nutrition.

Given the daily recommended caloric intake ranges between 2000 to 2400 calories for women and 2400 to 3000 calories for men, a can of either version of V won’t drastically affect your daily caloric allowance.

If you compare both of them to Red Bull (117 calories per 250ml can), the caloric content in Raspberry Lemonade V and Original Green V seem pretty standard for an energy drink that size.

That said, having either can of V Energy back-to-back isn’t a good idea, as all those calories will eventually add up in the long run, which may lead to some serious health issues such as weight gain and diabetes.

While V Energy has an average amount of calories, there’s still plenty of other great energy drinks out there that are lower in calories, which you may like if you’re not too keen on counting calories.

If you want to find out more, check out the article I’ve written on the best zero-calorie energy drinks, which might be useful for you.

Have a quick look at the list below for a better understanding of what goes into the Raspberry Lemonade V Energy Drink:

I’ve also included the Original Green V ingredients for comparison, as shown in the list below:

How Much Caffeine is in Raspberry Lemonade V?

Each 250ml of Raspberry Lemonade V contains 78mg of caffeine, which is a relatively low level of caffeine given that most energy drinks often contain around 50 to 300mg of caffeine.

In terms of caffeine, my go-to for an energy drink is around 50 to 100mg of caffeine per serving, and Raspberry Lemonade V fits perfectly into that sweet spot, giving me the boost without the crash afterwards.

Of course, Raspberry Lemonade V won’t have that much effect on you if you have a high caffeine tolerance, in which it might take you a couple of cans before you start feeling its full effects, depending on your tolerance.

But if you go over the daily caffeine limit intake of no more than 400mg, as approved by the FDA, you may experience side effects such as:

As you can see, both Raspberry Lemonade V and Original Green V have the same amount of caffeine, so no comparison is needed here.

That said, regardless of which versions you choose, make sure to consume energy drinks responsibly and control your caffeine intake. Remember, moderation is key.

How Much Sugar is in Raspberry Lemonade V?

While Raspberry Lemonade V’s sugar content isn’t insanely high, it should be noted that the daily added sugar limit according to the AHA is not more than 25g for women and 36g for men.

On the other hand, the UK’s NHS limits the daily sugar intake to no more than 30g per day for both females and males.

If you consider both of the recommendations above, I think Raspberry Lemonade V’s sugar content seems pretty standard for an energy drink, and it won’t cause you serious health problems if taken moderately.

My advice is, only reserve Raspberry Lemonade V for occasions where you really need an extra boost to finish up a task or if you happen to be burning the midnight oil.

And in cases where you find yourself too dependent on Raspberry Lemonade V, I strongly suggest you step away from the energy drinks and get yourself a glass of water instead.

Excessively consuming an unhealthy amount of sugar may lead to side effects such as:

Check out the interesting video below for more insight on how sugar affects your body:

To add on, you’ll most likely experience a sugar crash when you drink sugary beverages excessively which makes you feel slow and lethargic due to the sudden spike in your blood sugar level.

Raspberry Lemonade V contains a little more sugar than Original Green V (27.4g and 26.5g respectively) so if you’re planning on adding V Energy Drinks into your diet plan without dealing with the unnecessary sugar, the original version may be the healthier choice.

Raspberry Lemonade V has a pretty self-explanatory taste, but I personally find its lemon flavour more prominent than its raspberry when combined with all the fizzy energy drink elements.

To give you a better idea of what the flavour is like, the lemon flavour basically tastes like it’s Sprite but with a dash of red colour in it.

Personally, I prefer the taste of Original Green V and Blue V better, but if you love the taste of lemonade, it might complement your taste buds better.

From my personal experience, I did feel a surge of energy after drinking it, but 2 hours later, I feel rather sluggish due to the sugar crash.

That said, individual differences exists, and Raspberry Lemonade V might have a better effect on you, so there’s absolutely no harm trying it out for yourself.

What’s The Difference Between Raspberry Lemonade V and Original V?

Both Raspberry Lemonade V and Original Green V don’t have that much of a difference aside from their flavour, which isn’t surprising considering that they’re from the same brand of energy drink.

I’ve included a summary of some of the more notable differences and comparisons between the fruit and the original version of V Energy:

In terms of nutritional value, the Original Green V seems like the better choice, having less sugar, making it just barely healthier than Raspberry Lemonade V.

Eventually, it all boils down to your own personal taste and preferences, so if you enjoy the taste of lemonade, Raspberry Lemonade V might be the choice for you.

On the other hand, if you’re more health-conscious or planning to cut down your sugar intake, Original Green V definitely stands out in the nutrition department as it has lesser sugar and calorie content.

At the end of the day, both energy drinks do a pretty good job at being an energy booster.

For more comparisons between flavours of V Energy, have a look at my article on Blue V vs Green V, where I go through which of these two flavours might be better for you.

Looking for energy drinks with a similar caffeine amount as V has? Have a quick look at other great options below:

If you’re more into powdered energy drinks, I’ve also included some good options for you below, which you may find useful:

If you’re looking for a healthier option than V Energy Drink, how about getting your hands on REIZE?

REIZE is a great powdered energy drink that comes in a convenient 4g sachet. It has a sensible 50mg of caffeine, zero sugar with only 11 calories per serving.

Apart from that, it contains other beneficial ingredients such as taurine, ginseng and B-group Vitamins. This smart blend gives you the perfect amount of energy without having to worry about any sugar crash after.

Best of all, REIZE delivers straight to your door for only $1 per drink.

Try REIZE today, and I’m sure you’ll agree that it’s a healthier choice than V Energy.

Does Monster Actually Give You Energy? (Revealed)
← Previous
Best Energy Drinks In Europe (And Other Facts)
Next →
Click here to cancel reply.