Is Venom Energy Drink Bad For You? (The Truth) 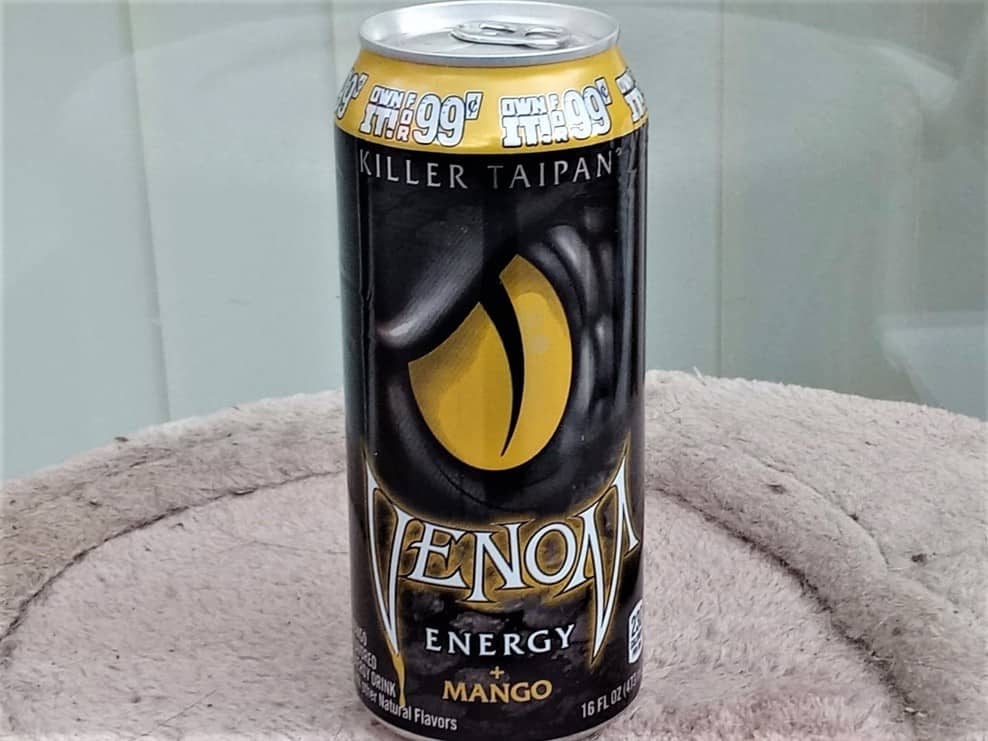 Need a shock to your system? Venom Energy drinks might be just the thing.

Packed with everything you want in an energy drink, the makers of Dr. Pepper and 7 Up sure know how to make a splash in the energy drink scene.

Although it may sound all great, is Venom Energy Drink actually bad for you?

For the short answer, as long as you have it in moderation and not too frequently, a can of Venom Energy Drink will give you a nice boost without harming your health. That said, there are definitely healthier energy drinks out there.

For a more detailed discussion, read on to find out everything you need to know about Venom Energy Drink, from nutrition to ingredients, and see for yourself if Venom Energy is good, bad, or somewhere in between.

For starters, let’s look at the basic nutritional facts of a 16 fl.oz can of Venom Energy Drink:

How Many Calories Are In Venom Energy?

There’s 230 calories in every 16 fl.oz can of Venom Energy Drink.

That’s definitely a lot of calories to burn, so I’d advise you to stay away from Venom if you follow a specific diet or have a relatively inactive lifestyle.

Still, it’s a lot of easy energy for your cells, so if you’re in need of a quick pick-me-up without much concern about the consequences, Venom Energy is a decent option.

As a quick reminder, an energy drink can’t really compete with the nutritional value of an actual meal, so if you haven’t eaten for a while, put down the energy drink and grab something healthy to eat instead.

With all that said, if high calories aren’t your style, I’ve written an article on the best zero-calorie energy drinks, which you’ll find helpful if you want to learn more.

How Much Caffeine is in Venom Energy Drink?

Caffeine is the key stimulant in any energy drink, helping to keep you awake, improve exercise performance, and tighten your focus.

Venom Energy has a pretty middling amount of caffeine for an energy drink its size, having the same amount as both Rockstar and Monster Energy at 160mg of caffeine per 16fl.oz.

Venom is definitely not the strongest energy drink on the market, so if you happen to have a higher tolerance for caffeine, you might need 2 cans for the effects to kick in.

Of course, all of this depends on your caffeine metabolism, and generally, 160mg of caffeine is plenty to get you going.

For instance, I personally prefer somewhere between 50 to 100mg of caffeine, which I find is enough to keep me going, but not so much that I start experiencing side effects.

Speaking of which, the FDA approves a caffeine intake limit of no more than 400mg per day. Any more than that might lead to side effects such as:

So, from a caffeine perspective, as long as you don’t go over the recommended daily limit, having a can of Venom shouldn’t really bring about any negatives.

How Much Sugar Is in Venom Energy Drink?

Every 16 fl.oz can of Venom Energy has 54g of sugar, which is on the higher end of the sugary energy drinks spectrum.

For comparison, that’s equivalent to a regular 16 fl.oz can of Monster Energy, which also has 54g of sugar in it.

If it’s not clear to you, 54g is about 4½ tablespoons of sugar, which is a lot of sugar and not something you would actively want in a healthy diet.

Given that the AHA recommends a daily added sugar limit of 25g for women and 36g for men, a can of Venom Energy definitely far surpasses that daily limit.

Having too much sugar over a long period of time can lead to some serious health problems, most notably:

Plus, the high sugar content means you are almost definitely going to end up with a sugar crash when Venom Energy wears off due to the spike in blood sugar it causes.

I would also strongly advise you against Venom Energy if you’re diabetic. Consuming that much sugar is a bad idea for anyone, but it’s worse if you have a pre-existing health condition.

So, if you want to stay on the healthier side of life, it might be best to moderate how many cans of Venom Energy you have, or even start looking for healthier, lower-calorie energy drinks to replace it.

In addition to the high amount of sugar, there’s also an artificial sweetener present in Venom Energy, namely sucralose.

While artificial sweeteners are often found in low-calorie/sugar-free energy drinks to give them a bit of sweetness (compensating for the lack of sweetness from sugar), Venom Energy doubles down and actually has both, which isn’t very common.

As sucralose is a zero-calorie sweetener, it won’t affect your overall diet because it has no real nutritional value. That’s great if you’re looking to keep your daily calorie intake in check.

However, since there’s already so much sugar present in Venom Energy, the zero-calorie nature of sucralose is pretty much moot.

In any case, the FDA has approved artificial sweeteners such as sucralose for general use, so there’s really no need to worry as long as you have them in moderation.

Here are some other ingredients you should take note of in Venom Energy drinks.

High-Fructose Corn Syrup (HFCS) is essentially an artificial sugar made from corn syrup and is probably one of the unhealthiest ingredients found in Venom Energy Drink.

Among the list of possible reasons why HFCS is bad for you include:

In short, HFCS is a sweetener that is probably downright bad for you, because it may cause metabolic dysregulation and other adverse effects on your health if consumed in excess.

While we don’t know how much HFCS is present in Venom Energy, we can assume that a single can won’t have a worrying amount, but excessive consumption of Venom will definitely add quite a bit of HFCS to your overall diet.

Maltodextrin is a thickener and preservative which adds a dietarily insignificant amount of sugar, but even small amounts can raise your overall blood sugar levels.

Since there’s already a really high amount of sugar present in Venom, maltodextrin isn’t really an issue. However, it’ll pay to keep this ingredient in mind when looking for sugar-free energy drinks if you’re diabetic.

Guarana is a plant native to Brazil which boasts an impressive range of stimulants (caffeine, theophylline, and theobromine) and various antioxidants.

Research suggests that it may help reduce fatigue and also provide you with a quick energy boost, but considering a majority of guarana is caffeine, it might be hard to attribute that to the entire plant.

While you may know ginseng as a traditional herb, it has plenty of possible benefits including:

Both these ingredients are definitely nice to have in an energy drink, although considering we don’t know how much of each extract is found in Venom Energy, it might be best to take these benefits with a pinch of salt.

Is Venom a Good Energy Drink?

Despite the high sugar content, Venom is a good energy drink that delivers on its promise to give you a nice boost in energy and focus when you need it.

Caffeine and sugar are a pretty good combo to keep you awake and aware for extended periods of time, and Venom Energy has both in spades.

In terms of functionality, Venom is just as good as a can of Monster or Red Bull in giving you that energy boost, so you don’t have to worry about it not being able to pull you through a late-night cram session.

Besides that, the high sugar content and fruity flavor is a pretty addictive combo, so just keep in mind not to have too much of it.

For more information on Venom Energy, take a look at the video below, which includes taste tests if that’s up your alley:

How Bad Is Venom For You?

Venom is definitely not winning any points for being healthy, especially due to its high sugar content.

Venom is definitely not an energy drink you should be having multiple times a day, all that sugar is bound to make you crash, and you’re definitely not doing your health any favors.

Besides that, definitely don’t have Venom Energy if you happen to fall into any of the categories in the warning label above.

How Many Venom Energy Drinks Should You Have A Day?

I personally recommend that you only have one can of Venom Energy Drink a day due to the large amount of sugar in the drink.

While the caffeine is at a middling amount of 160mg per can, the sugar in Venom Energy should concern you the most.

Considering that one can will already put you over the daily max sugar limit, having two cans in a day is definitely a recipe for disaster.

The calorie content of Venom Energy is also pretty high, so you won’t be doing your health or diet any favors if you have more than one can a day.

I would definitely advise moderating your Venom Energy consumption habits. Stick with having 2-3 cans a week max, and have a coffee, tea or sugar-free energy drink if you really need that caffeine hit for the other days.

There’s only a handful of notable Venom Energy flavors, I’ve listed them below.

Venom might taste great, but here are a bunch of worthy alternatives if you find that Venom isn’t tickling your fancy:

Venom Energy is a decent option, but I think REIZE is a better choice for several reasons.

REIZE is a convenient powdered energy drink with each 4g sachet containing a sensible 50mg of caffeine. REIZE is completely sugar-free, with only 11 calories per serving.

It also contains a bunch of other beneficial ingredients such as taurine, ginseng, and B-group vitamins, a well-researched formula that gives you the perfect energy boost without the crash.

So try REIZE today, and I’m sure you’ll agree it’s a smarter choice than Venom.