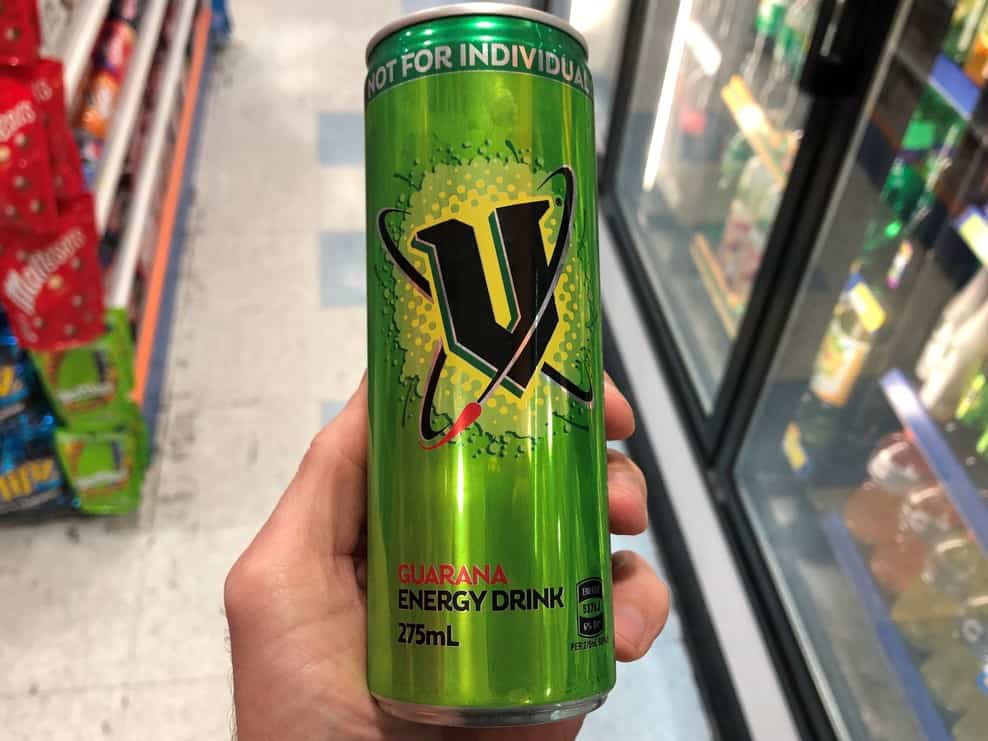 If you’re looking for an energy drink that’s a bit more unique than your standard fare, V Energy Drink has got you covered with its light-green tint and use of guarana, making it stand out from the rest of the crowd.

Uniqueness aside, you’re probably wondering if V Energy is as green as the colour of its can is and whether or not it’s suitable for a vegan diet.

For the brief, you’ll be pleased to know that there’s nothing in V Energy that might make it overtly non-vegan, although the use of sugar and colourings may affect you depending on where you stand as a vegan.

But if you would like a bit more detail on how vegan V Energy is, along with where it stands with other diets, read on to find out.

First off, let’s take a quick look at the ingredients of both the original and sugar-free option of V Energy Drink to see what’s present in a can.

Now that we know all the ingredients, let’s go through each of them and see how they fare:

As I’ve based this on PETA’s animal-derivative ingredients list, the information above should be pretty accurate for general use.

As you can see, V Energy is a fairly vegan-friendly energy drink, so if you’re a vegan for the health benefits, it should be fine for you to have one.

Is The Taurine Used In V Energy Vegan?

As the taurine content in V Energy and most other energy drinks are synthetically made, there shouldn’t be any conflict with it and vegan-diets.

While Taurine is most naturally found in animal sources, the taurine in energy drinks, such as V Energy, is often made from chemical synthesis, being a lot easier and cheaper to produce in a lab.

For more information on taurine and what exactly it does to benefit you, have a look at the article I’ve written previously, for all about the health benefits of taurine for some interesting facts on this amino acid.

Are The Colourings Used In V Energy Vegan?

As caramel colouring (like the ones present in V Energy) is usually derived from the caramelization of carbohydrates, the colouring may not be vegan depending on the source.

For the most part, you can safely assume that caramel food colourings are most likely vegan, as their base ingredient is usually some form of sugar, and those contain no animal products at all.

However, a small portion of caramel colour may be sourced from white or processed sugar, which may or may not has gone through animal bone char (which we’ll talk more about below).

So for the most part, it’s safe to assume that the colouring used in V Energy isn’t sourced from animal products, but if you’re going to have to contact the manufacturer to be really sure.

How Much Sugar Is In V Energy Drink?

A 275ml can of Green V Energy has 29.2g of sugar, while the sugar-free version has no sugar and instead uses artificial sweeteners

For reference, 29.2g of sugar is roughly equal to 2 tablespoons which, while definitely tasty, isn’t all that great for your health in the long-run.

According to the AHA, they recommend a max daily sugar intake of 25g for women and 36g for men, which means that a can of V Energy is definitely a bit more than what you should be having per day.

Of course, while going on the occasional sugar binge is fine, consistently having a high amount of sugar in your diet would start becoming a problem.

Among the health issues that a high sugar diet might bring include problems such as:

Apart from the long-term risks, you’re also a lot more liable to suffer from a post-energy drink sugar crash, where you feel slow and lethargic due to the rise and fall in your blood sugar levels.

In any case, just because an energy drink may be rated vegan-friendly, it doesn’t exactly means it’s all that healthy for you, so be sure to watch your sugar intake and try to keep your daily sugar consumption to a minimum.

Is The Sugar Used In V Energy Vegan?

While sugar is often thought of as a vegan ingredient, the processing of some sugars, especially those using bone char, may render some sugars unfit for vegan consumption from an ethical standpoint.

Sugar by itself is derived from plants and is totally vegan, so it’s nutritionally not going to be any worse or better for you whether or not it’s been processed through bone char.

Ethically, however, the use of charred animal bones during the refinement process of sugar is definitely a concern for vegans, and is a definite concern if the production question doesn’t disclose where it’s sugar is sourced from.

That being said, PETA does mention that you shouldn’t stress too much about the sugar, even if the source is unknown, as there are better ways of being an ethical vegan than worrying about a fairly minor detail.

But if you want to be 100% sure about the sugar content of a product such as V Energy, contacting the manufacturer for an answer is definitely the most direct way of having your questions answered.

Or, if you’re not too fond of the fuss, opt for sugar-free energy drinks instead, such as V Energy Sugar-Free, which contains zero sugar, and is definitely a lot more vegan-friendly than the sugary original version.

If sifting through which energy drinks have vegan-friendly sugar seems like a chore, take a look at the article I’ve written on various sugar-free energy drinks for some notable alternatives.

And for more information on sugar and how it relates to vegan diets, have a look at the video below:

How Much Caffeine Is In V Energy?

A 275ml can of V Energy has about 85mg of caffeine per serving, which is a pretty average amount of caffeine.

Whether synthetically made or sourced from cocoa beans and tea leaves, there’s no doubt that the caffeine content in V Energy is vegan.

Given that energy drinks usually range between 50 to 300mg of caffeine, V Energy finds itself on the lower end of the caffeinated beverage scale, with a caffeine content comparable to a basic cup of coffee.

Personally, I prefer to have energy drinks with a caffeine content of around 50 to 100mg per serving, so V Energy has the right amount to give me a boost without being overwhelmed by the effects.

Of course, everyone has a different tolerance for caffeine, so depending on your caffeine metabolism, what might work pretty well for me may mean downing a few extra cans of V Energy for you.

Still, it’s best not to go too overboard with the caffeine, as the FDA approves a caffeine intake limit of no more than 400mg per day, and any more than that might lead to side effects such as:

As always, the key to enjoying caffeinated beverages is to have them in moderation. Try to keep track of how many cans of V Energy you’ve consumed, and keep your caffeine intake within your personal tolerances.

Considering V Energy does list their product as containing wheat-derivatives, its pretty safe to assume that V Energy isn’t a gluten-free product.

Unless you have celiac disease (and are allergic to gluten), a gluten-free diet is more of a lifestyle and health choice rather than an ingredient that you should entirely avoid.

As gluten is often found in wheat, rye, and barley, V Energy, unfortunately, doesn’t fall under a gluten-free energy drink, as it contains wheat derivatives on its ingredients list.

Considering that a keto diet requires you to cut down on carbohydrates, V Energy Original, with its sugar content, probably isn’t the best energy drink to go with a keto diet.

The Keto diet is a diet that’s characterised by being high in protein and fats while being low in carbs, being noted to have a bunch of health benefits, such as weight loss, and is also tied to health improvements.

As such, with 29.2g of sugar, Original Green V is definitely going to hamper the progress you make with a keto diet as it contains a moderate amount of calories.

That said, if you enjoy the taste of V, you can consider V Sugar-Free, which has low sugar and calorie content, making it a good option for a keto-friendly energy drink.

As for other keto-friendly energy drinks, have a look at the article I’ve written on the best energy drinks for a keto diet for some other options that might interest you.

All-in-all, V Energy Drinks are as vegan-friendly as an energy-drink can get without being officially certified, though there are better options out there, especially if you’re an ethical vegan.

From a purely nutritional and ingredient standpoint, there’s nothing in V Energy that would constitute as non-vegan, so if you’re a health-conscious vegan, having a can of V Energy should be perfectly fine.

That being said, the source of V Energy’s sugar and colouring used is pretty unknown, so unless you’re willing to take it up with the manufacturer, it might be a coin toss as to whether or not V Energy Drinks are truly vegan.

So if you have stricter criteria for what constitutes a vegan energy drink, and unless you really like the taste of V Energy, you might be better off finding other options that fit the bill of an ethically-sourced energy drink.

To summarise, V Energy Drink is perfectly alright for you to have if you’re following a vegan diet for the health benefits though that doesn’t exactly make the drink any healthier than other brands.

If you like the taste of V Energy, here are some other energy drinks that you might enjoy as well.

There are also some awesome powdered options too, such as:

While V Energy is a perfectly serviceable vegan energy drink, I find REIZE to be even better.

REIZE is a great powdered energy drink that comes in convenient 4g sachets. With a sensible 50mg of caffeine, REIZE is completely sugar-free and has only 11 calories per serve.

REIZE also contains a vegan-friendly smart blend of taurine, ginseng, and B-group vitamins, making it the ideal mix, giving you the perfect energy boost without the crash.

Best of all, REIZE ships straight to your door for only about $1 per drink, which is amazing value for money.

So try out REIZE today, and I’m sure you’ll find it the better choice for V Energy.