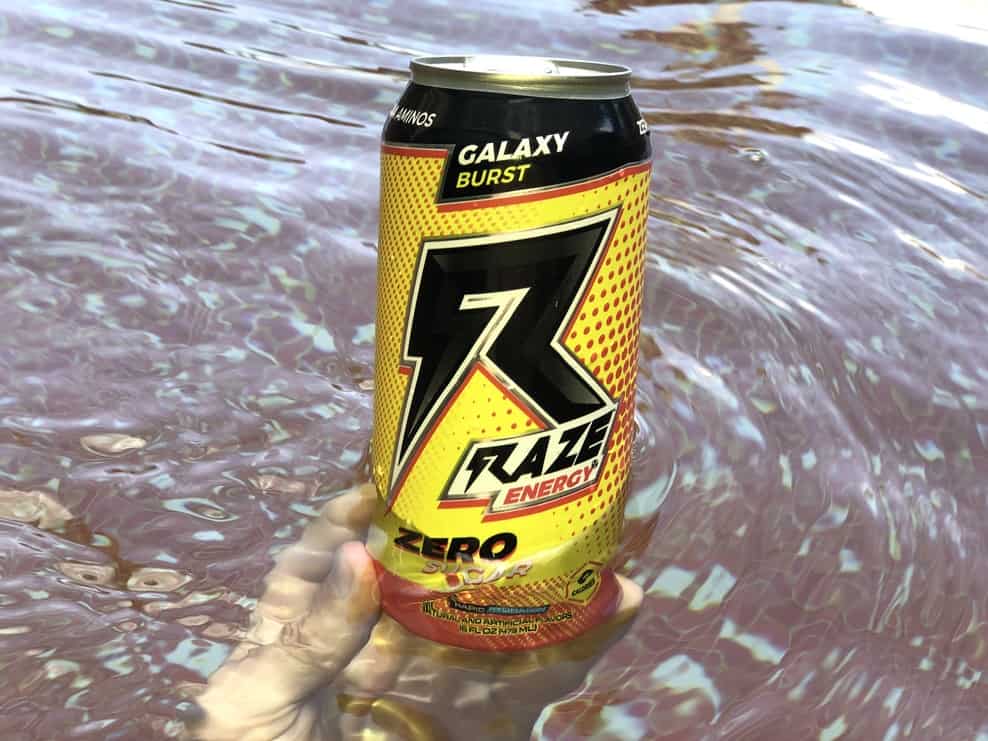 Let’s take a closer look at Raze Energy Drink, one of the prominent pre-workout energy drinks available in the market, to answer a fairly simple question about it:

The short answer is that Raze does advertise itself as being vegan-friendly, so it should be perfectly alright to have a can of Raze even if you follow a vegan diet.

But if you still doubt Raze’s claim, let’s dive deeper into Raze Energy Drink’s ingredients and their sources to find out just how vegan their drink is in addition to its dietary insights.

First off, let’s take a look at Raze Energy Drink’s ingredients and see if there’s anything of interest:

Raze has its own in-house nutrition complex called the reFRESH Performance Complex.

Ingredient complexes are pretty tricky to evaluate, considering we don’t really know how much of the actual ingredients are in the complex (unless you happen to take an energy drink to an actual lab).

So it’s best to take any possible benefits of an ingredient complex, such as those found in Raze, with a grain of salt.

Now, let’s get back to figuring out if Raze is vegan.

Now that you’ve got an idea about the ingredients in Raze, let’s take a closer look at each of their properties and source.

I’ve personally cross-referenced the table above with PETA’s animal-derivative ingredients list, so everything should be up to scratch.

While almost all of the ingredients above are synthetically sourced or plant-based, there are a few that are somewhat questionable on the vegan scale, namely L-Tyrosine and Carnitine L-Tartrate.

Since Raze states that its product is vegan, we can assume that the L-Tyrosine in Raze is derived from plant or synthetic material.

L-Tyrosine is an amino acid that assists in memory and countering the effects of sleep deprivation, which makes it a pretty useful energy drink component.

L-Tyrosine is often derived from synthetic or plant sources, but some variations are sourced from animals, which could make it non-vegan.

While the L-Tyrosine in Raze is vegan-friendly, it’s not always the case in other energy drinks, so be sure to check with the manufacturer before having any.

Is Carnitine L-Tartrate in Raze Vegan-Friendly?

Since Raze is advertised as being vegan-friendly, we can generally assume that the carnitine content is from a plant-based or synthetic source.

Of course, if you’re vegan and are concerned about the carnitine levels in your body, you should probably opt for supplements instead of having a can of Raze, as that would be more beneficial.

Are BCAAs in Raze Vegan-Friendly?

As BCAAs can be extracted from plants, it’s safe to assume that the BCAA in Raze is vegan-friendly.

BCAAs, or branch-chained amino acids, are essential nutrients that bring loads of benefits, and since the body can’t produce it by itself, the only way you can get BCAAs is from outside sources,

Considering that Raze is claimed to be overall vegan-friendly, the BCAA content should be sourced synthetically or is plant-based.

How Much Caffeine Is In A Raze Energy Drink?

Each 16 fl.oz can of Raze Energy Drinks contains 300mg of caffeine from a mixture of caffeine anhydrous and caffeine citrate.

Raze isn’t satisfied with giving you regular caffeine, instead offering you a combination of caffeine anhydrous and caffeine citrate, which are both from synthetical sources and are thus vegan-friendly

Caffeine anhydrous is simply more concentrated caffeine, though research has yet to find evidence on if it provides a significant boost in sports performance when compared to regular caffeine.

On the other hand, caffeine citrate is an odd ingredient to have, considering it’s mostly used for short-term treatment for breathing problems in premature infants.

That said, overall, Raze contains 300mg of caffeine and is one of the strongest energy drinks available on the market.

Do note, however, that the FDA sets a recommended daily limit of no more than 400mg of caffeine per day, where having any more than that can lead to some possible serious side effects, such as:

Of course, how much caffeine you can tolerate is often dependent on your caffeine metabolism.

For example, I personally prefer somewhere between 50 to 100mg of caffeine per serving, as it gives me a pretty good boost without having to worry about any potential side effects.

Raze has a bit too much caffeine for my liking, but if you like your coffee black and happen to be really into the exercise scene, then Raze might just be the right energy drink for you.

How Much Sugar Is In A Raze Energy Drink?

You’ll be glad to know that Raze Energy Drink is entirely sugar-free, but it does, however, contain artificial sweeteners, namely sucralose and acesulfame potassium.

With Raze being sugar-free, you don’t have to worry about the health and nutritional impact of sugar which will also save you from doing a lot of math as you won’t need to calculate its calorie content.

Apart from health reasons, Raze being sugar-free also means that you don’t have to worry about the possibility of sugar being processed through bone-char, which would be an issue if you’re an ethically-focused vegan.

As a plus, you also get to avoid the dreaded sugar crash, as the lack of sugar means that Raze doesn’t raise your overall blood-sugar level, which means that there wouldn’t be a drop either.

On the other hand, Raze Energy Drink does contain sucralose and acesulfame potassium. Both ingredients are zero-calorie sweeteners and shouldn’t add anything to the drink’s overall nutritional content.

If you’re concerned about artificial sweeteners, don’t worry because the FDA has approved them for general use.

Therefore, as long as you aren’t constantly drinking cans of Raze (bad idea by the way), you should be alright.

Raze Energy Drinks advertises itself as being gluten-free. Since the product doesn’t contain any wheat, rye, or barley, it’s safe to assume that Raze is, in fact, gluten-free.

A gluten-free diet is recommended, especially if you suffer from celiac disease, having an aversive reaction to gluten in your food.

For the rest of us, gluten-free diets are mainly used to improve our overall health and diet, which I find does show some success in varying degrees depending on the individual.

So if you happen to practice a gluten-free diet, Raze definitely won’t have a negative impact on that front, but if you’re still not sure, it’s always best to consult a health specialist before adding this energy drink into your diet.

If you want to know more about what a gluten-free diet actually does to your body, take a look at the video below:

As Raze is sugar-free and doesn’t have any calories, it should be perfectly compatible with a keto diet.

The keto diet is essentially a low-carb, high-fat diet that can provide health benefits such as weight loss and general health improvements.

If you happen to be on a keto diet, you should do your best to stay away from anything that has a high amount of carbs, so sugary energy drinks are definitely off the table.

Since Raze is sugar-free, it shouldn’t really affect your carbohydrate intake rate, so it’s got the green light if you want an energy drink to complement your keto diet.

Remember, not all energy drinks are suitable for a keto diet, especially the sugary ones. If you happen to be looking for keto-friendly energy drinks, I’ve written a complete guide that you might find helpful.

While not officially certified by any formal body, Raze does seem to meet all the requirements of a vegan-friendly energy drink.

Considering that Raze’s official website and Amazon page states that the energy drink is vegan-friendly, there shouldn’t be any concerns about having the drink if you’re vegan from both a health and ethical perspective.

Still, Raze isn’t officially vegan-certified, so if you want some peace of mind, there are plenty of other vegan energy drinks out there that won’t have you scrutinizing their ingredients.

But, if you need that energy boost before a workout or simply a drink to wake you up, Raze is still a pretty good choice.

Raze Energy Drink comes in a variety of fruity and candy-like flavors, so even without sugar, it’ll definitely sate your sweet tooth. Below are some of its flavors:

Want other vegan alternatives to Raze? Take a look at these and see if any of them grabs your interest:

If you think Raze has a bit too much caffeine, how about trying REIZE instead?

REIZE also contains a smart blend of taurine, ginseng, and B-group vitamins (all from vegan-friendly sources), which work together to give you the perfect energy boost without the sugar crash afterward.

Best of all, you can get REIZE shipped straight to your door in record time for only about $1 per drink.

So try REIZE today, and I’m sure you’ll agree it’s a smarter choice than Raze.

Best Energy Drink For Low Carb Diets (Zero Carbs)
← Previous
Can You Drink Adrenaline Shoc Every Day? (Spot On)
Next →