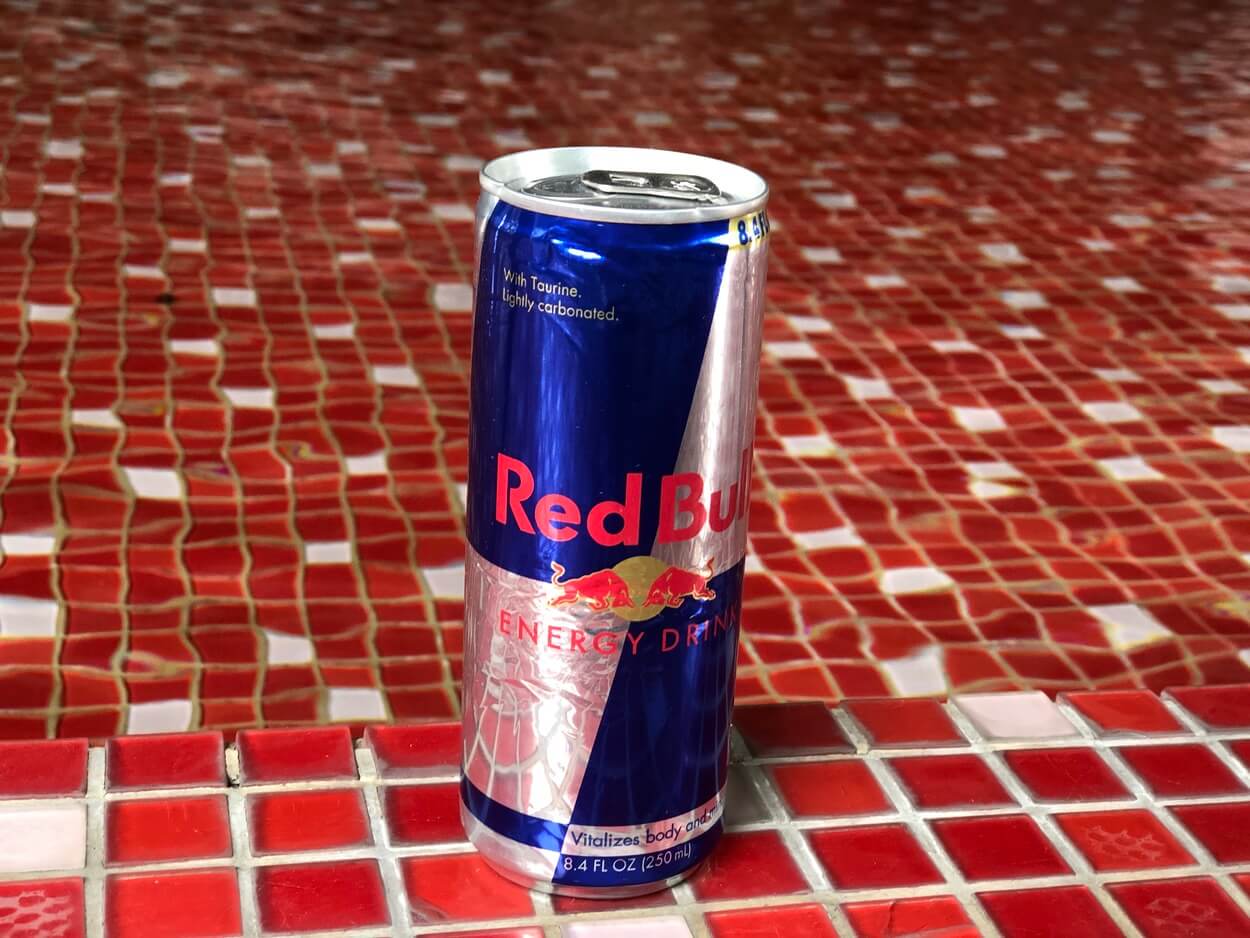 Red Bull is one of the most popular energy drinks out there. Red Bull has the highest market share of any energy drink in the world with 7.5 billion cans sold in the year 2019.

While it’s not the strongest energy drink based on its caffeine content, Red Bull has a special formula that has been appreciated worldwide by top athletes, students, professionals to enhance their concentration and performance. RedBull is widely consumed by people to give them their daily boost but when it comes to alcohol, it’s best to keep the two beverages separate.

If you’re concerned about your can of Red Bull containing alcohol, you may rest assured because Red Bull is a non-alcoholic energy drink.

But let’s find out more about Red Bull energy drinks and its relationship with alcohol.

To find out whether Red Bull contains alcohol or not, we need to take a look at the ingredients given on the back.

ugh idea of what we’re working with.

It also contains amounts of:

From the list of ingredients, we can find no trace of alcohol in the Red Bull energy drink but it does have caffeine that gives you the energy boost required to get you through the day.

If you would like a more detailed look at the ingredients of Red Bull, then do check out my Red Bull Caffeine and Ingredients Article to find out more information.

Each can of Red Bull Energy Drink contains 75mg caffeine.

Red Bull is one of the most prominent names in the energy drink industry. But that doesn’t necessarily mean it has the highest amount of caffeine to “give you wings”. Red Bull actually contains quite a moderate 75mg of caffeine compared to other energy drinks in the market. But you still get the boost in energy and focus from your can of Red Bull.

The 75mg caffeine in Red Bull is sure to leave you more awake and alert for a few hours without making you jittery and anxious. One can of Red Bull should be enough to keep you going through the day.

The FDA recommends your daily intake of caffeine to be not more than 400mg. So a can of Red Bull does the job of keeping you energized without experiencing the side effects of overconsumption of caffeine such as:

Taurine is an amino acid that the body produces. It is found in 1000mg in a can of Red Bull.

While Red Bull is composed of many different ingredients, one of the key ingredients responsible for Red Bull’s proposed effect is Taurine. It is found in meat, fish and is also produced in the human body.

Taurine is used as a dietary supplement to help improve athletic performance. There have been studies that suggest taurine mixed with caffeine helps enhance mental capacity.

Red Bull is not alcoholic, although it is often used as a mixer for alcoholic energy drinks, which is probably what drives thee misconception.

Red Bull doesn’t have any alcohol content in its ingredients. The main ingredient of Red Bull that works as an energy booster is caffeine which is not present in alcoholic drinks. Alcoholic drinks contain ethanol along with other ingredients that give you an intoxicating effect.

Is Red Bull A Kind Of Beer?

Red Bull is not similar to Beer.

Beer is an alcoholic made which is brewed from cereal grains such as wheat, maize, corn, barley, etc. Then they go through a process called fermentation that produces ethanol and carbonation in the resulting beer. Red Bull is an energy drink used by college students and athletes to sharpen their focus and increase energy.

Mixing Red Bull and beer can turn into a dangerous combination as energy drinks mask the effects of intoxication and make people drink a lot more and than they intend to. Mixing these two drinks together can make someone overindulge in alcohol.

People have shown to lose their natural control and end up feeling more tired and sedated rather than being stimulated after consuming these two drinks together. It is highly advised to maintain caution to drink Red Bull and alcoholic drinks even a few hours apart let alone mixing them together.

So Red Bull is not a type of beer nor is it an alcoholic drink. It should under no circumstances be mixed with beer. Although there are some alcoholic drinks available that contain energy drinks like Red Bull to give you a caffeine high, it is not recommended to consume them in high quantities as there may be some side effects.

Red Bull has a distinct taste that is different from the taste of alcohol.

Red Bull has a sweet taste and contains fruity flavors in some of its cans. Red Bull is a carbonated drink so it can have a fizzy taste to some. It also has a grapefruit/strawberry flavor because of the taurine present in the energy drink. Overall Red Bull has a pleasant taste but the experience can be different for everyone.

Alcohol usually has a bitter taste that results due to fermentation. Different types of alcohol have their own unique taste and fill. While alcohol typically leaves a bitter after taste in the mouth, some drinks taste sweet due to the sugar and other ingredients present in them.

Can you Mix Red Bull Energy Drink With Alcohol?

Mixing caffeinated cocktails is an ill practice that is prevalent in many cultures. Research indicates that mixing energy drinks and alcohol may result in risky drinking practices. Alcoholic energy drinks may alter brain neurochemistry in young people in much the same way cocaine does.

The ingredients in Red Bull such as caffeine, taurine, ginseng, etc have a negative impact on the brain when mixed with alcohol. On the other hand, the depressant in alcohol makes you more sedated. Drinking the two together counteracts the effects of alcohol and makes you more energetic and it masks the level of intoxication so you tend to drink a lot more than your usual capacity.

There have been recent studies that show that young adults are more likely to end up in hospitals after consuming energy drinks and alcohol together as it makes them impulsive due to the adrenaline rush from the caffeine. Drinking alcohol mixed with energy drinks may also lead you to more bar fights and develop a habit of substance use.

Can You Drink Red Bull and Vodka Together?

Energy drinks like Red Bull contain a greater amount of caffeine than normal cold drinks. Red Bull when mixed with vodka increases your capacity for drinking and delays the signs of intoxication. The caffeine along with the sugar and other ingredients mask the power of alcohol and make you feel more sober and energetic than you really are.

Although mixing vodka and Red Bull together could be a recipe for disaster, it is a very popular combination around some places. Even if the two drinks are consumed together, there should be extra caution about drinking in moderation.

In these cases, eat lots of food and drink a lot of water in between alcoholic drinks. Teens and young adults should avoid such caffeinated alcoholic drinks, and do read up on the CDC‘s warning on mixing caffeinated beverages with alcohol to get a more rounded view on what exactly it entails.

Side Effects of Drinking Red Bull With Alcohol

Red Bull and vodka might be an oh-so-popular combination but that doesn’t mean it’s good for you. mixing the two drinks can have a number of physical and neurological side effects. It can also be dangerous as drinking Red Bull and Vodka may result in overdrinking. While alcohol works as a depressant, caffeine works as a stimulant. It creates the effect of being “wide-awake drunk”

Some of the side effects and potential risks of drinking Red Bull and vodka are mentioned below:

So it is heavily advised to remain cautious about your alcohol intake if you’re planning on drinking caffeine and alcohol together (although we wouldn’t recommend it). Drink plenty of water and avoid staying behind the wheels for the night.

What Percentage Of Red Bull Is Alcoholic?

Red Bull does not contain alcohol and thus has no alcohol percentage present. Red Bull contains a stimulant in the form of caffeine that gives you an instant burst of energy.

There is no alcohol percentage in Red Bull. It is a caffeinated energy drink that makes you more focused and may improve your performance. Alcohol is made of ethanol and other fermented ingredients that give you a pleasant sensation and make you reckless and carefree.

Red Bull contains caffeine and other ingredients to keep you awake and focused while alcohol makes your senses loosen. As alcohol and Red Bull are very different kinds of beverages and they shouldn’t be mixed together.

Side Effects of Drinking Red Bull

Red Bull contains around 75mg of caffeine and 27g of sugar in each can. Drinking a can of Red Bull every once in a while before you have to pull an all-nighter for college or as a pre-workout drink should give you a boost in focus and concentration as well as enhanced physical ability, although drinking it every day is not advised as energy drinks such as Red Bull has some side effects.

Drinking Red Bull everyday may have the following side effects:

Red Bull is halal and safe to drink. The taurine used in Red Bull is not real, but synthetic.

According to research carried out by some institutions, Red Bull is halal and made of all halal and safe to drink ingredients. It doesn’t contain any animal-derived ingredients and thus it’s halal for users. Red Bull is also gluten-free, wheat-free, dairy-free, and lactose-free.

If Red Bull doesn’t seem to cut it for you, REIZE has you covered if you’re looking for anything to help you regulate your coffee and sugar intake.

REIZE energy drink is a powdered energy drink that gives a reasonable50mg of caffeine, 11 calories, and totally free of sugar. It’s a great treat that can assist you to oversee your exercises. Aside from that, it is additionally prepared with taurine, ginseng, and B-vitamins.

The caffeine and sugar content of REIZE is manageable, and it doesn’t give you any crashes. It’s a convenient drink that helps you be power through your tasks.

Best of all, you can have it shipped directly to your front door for only about $1 per serving. That’s amazing value for your money!