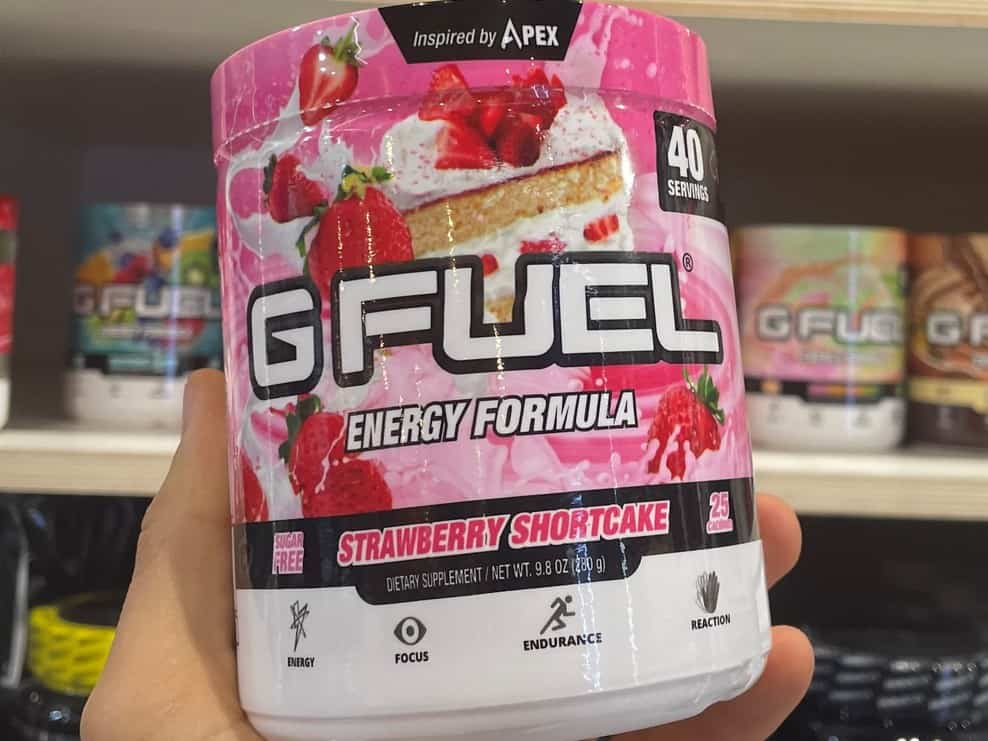 Whether it be for gaming or keeping you awake through those late-night hours, you really can’t go wrong with G Fuel, given its moderate caffeine content and sugar-free formula.

That being said, while G Fuel can definitely work for you and give you a boost, the question is, is it really due to the energy-boosting capabilities of the drink or a very intricate placebo effect due to marketing?

In brief, you’ll be pleased to know that G Fuel, both the powder and canned version, definitely does work, mostly through its caffeine content, with other ingredients complementing caffeine’s effects.

For the detailed response, read on and find out all about G Fuel Energy Drinks, from its nutrition facts to caffeine content and how it works to give you the energy boost you need.

Here’s a quick look at the nutrition facts of G Fuel Powder and G Fuel Cans to give you a rough idea of how they affect you:

How Many Calories Are in G Fuel?

G Fuel has pretty minimal calories in their products, having a sugar-free formula, which is great if you keep to a strict daily calorie limit or don’t want to hamper your appetite.

As such, you don’t really need to adjust your meal plan to slide in either version of G Fuel, which makes it a great pick-me-up to have to wake you up in the morning or keep you from falling into that post-lunch slump.

That being said, your body needs a fair amount of calories to function, which can range between 2000 to 2500 calories, depending on your lifestyle choices and biological factors.

From a nutritional perspective, G Fuel doesn’t actually give you any substantial amount of energy for your cells to burn, with most of the boost you’re getting coming from the caffeine instead.

So, while labeled as energy drinks, G Fuel (and other zero-calorie energy drinks) doesn’t really give you ‘energy’ in the scientific sense.

As such, to get the full effects of G Fuel and make sure you don’t crash from a lack of calories, having a proper meal is essential in giving your body the needed calories to burn through the day.

For more information on calories and what it really means in the practical sense, have a look a the video below:

There’s quite a bit that goes into a serving of G Fuel Powder, with multiple complexes and other ingredients thrown in for good measure.

That said, if you want a more in-depth analysis of every ingredient and what exactly it does, take a look at the article I’ve written previously on that very topic.

Here are all the ingredients of a G Fuel can as written on the back of the can:

If you’re interested in learning more about the caffeine and ingredients in G Fuel cans, take a look at the article I’ve written previously, where I’ve detailed all that.

How Much Caffeine Is In G Fuel?

The most important part of any energy drink is caffeine, being a big reason why energy drinks are able to keep you awake and improve your overall cognitive function.

Energy drinks generally have between 80 to 300mg of caffeine per serving, which makes a G Fuel Powder’s caffeine serving pretty average, while G Fuel Cans are a lot higher on the scale.

For example, I personally much prefer to have energy drinks to have somewhere between 50 to 100mg of caffeine per serving, which is just the right amount to give me a pretty good boost.

As such, both versions of G Fuel definitely have a much higher caffeine content than I would prefer, but if you have the tolerance and caffeine metabolism for it, they might be the right energy drink for you.

In addition to that, G Fuel Powder does have the freedom to customize your servings to your own personal taste, which is great if you have some pretty strict preferences.

That being said, it’s best not to have too much caffeine per day, or else you might run into some notable caffeine-related issues.

For reference, the FDA approves a caffeine intake limit of no more than 400mg per day. Having any more than that might lead to side effects such as:

So be sure to keep your G Fuel servings to a tolerable minimum, and try not to double down on other caffeinated beverages, such as tea, coffee, or sodas, if you do plan on having a G Fuel sometime within 24 hours.

Does G Fuel Have Sugar?

G Fuel is entirely sugar-free, which means you don’t have to worry about the presence of sugar in either version of G Fuel.

This is pretty great from a health perspective, as consistently having far too much sugar in your diet can lead to some alarming health consequences, such as:

Apart from the health benefits, you also get to avoid the dreaded sugar crash, where you feel slow and lethargic due to a sudden spike and drop in your blood sugar levels after an energy drink.

All-in-all, the lack of sugar does make G Fuel quite a bit healthier for you than an average energy drink, even if you are missing out on some easy calories and the sweet, sweet dopamine rush.

If you’re looking for some other great sugar-free energy drink options, I’ve written an article on the best energy drinks without the crash, where you can find some great alternatives.

Does G Fuel Use Artificial Sweeteners?

While free of regular sugar, G Fuel does contain a couple of artificial sweeteners to improve its taste, namely sucralose and acesulfame potassium.

Present in both powdered and canned versions of G Fuel, sucralose and acesulfame potassium are zero-calorie sweeteners, so they don’t really add or detract to the nutritional value of the energy drink.

As such, it’s really no wonder why they’re used as a sugar substitute, considering their ability to replicate sugar’s taste without the crippling guilt that comes with having too much sugar.

While there are plenty of controversies concerning the long-term use of artificial sweeteners and it’s potential effects, the FDA has approved them for general use, so it shouldn’t be too much of a concern.

In any case, so long as you don’t have too many drinks with artificial sweeteners present in them, you should be perfectly fine.

G Fuel definitely does its job, giving you a quick feeling of energy to get you back on track for your work or help you with those split-second gaming decisions.

Energy drinks are pretty similar to coffee, both getting the boost from caffeine, which binds to the adenosine receptors in your brain, keeping you focused and awake for a longer period.

As G Fuel is a gaming energy drink, there are discussions on whether it improves reflex and reaction time, and considering that caffeine does boost overall reaction times, G Fuel does indeed work.

That being said, the longer you’re under the effects of caffeine, the harder the crash is once the effects wear off since you’ve already burned a lot more energy by staying awake and focused for that much longer.

As such, while it’s pretty tempting to have a serving of G Fuel whenever you’re feeling tired, the best way to really give yourself energy is by having a decent night’s rest.

To conclude, while G Fuel definitely works as an energy booster, it’s best not to rely on it too much. You don’t want to mess up your sleep schedule or form a caffeine habit with it.

How Long Does It Take For G Fuel To Kick In?

Based on the official G Fuel website, it’ll take about 10 to 15 minutes for the effects of G Fuel to kick in, giving you a solid boost for around 4 to 6 hours after.

Of course, a lot for this varies depending on your overall caffeine metabolism and personal health factors, but it’s a pretty good baseline if you’re not too sure about how long G Fuel will last.

Based on the information above, try not to have G Fuel too late into the evenings, unless you plan on pulling an all-nighter, as the caffeine can take up to 12 hours before it fully leaves your system.

So be sure to plan your G Fuel consumption according to a decent schedule and remember. It’s a lot better to recharge your battery the natural way instead of constantly topping it up with an energy drink.

Is G Fuel Bad For Your Health?

As long as you’re healthy and know how to moderate your caffeine intake, having G Fuel, be it powdered or canned, won’t have much of a negative impact on your health at all.

While G Fuel won’t give you energy in the specific sense of the word, the caffeine you get from it helps in keeping you awake and alert, getting you through tasks.

If you are experiencing any side-effects with G Fuel, it’s most likely due to going over your daily caffeine limit or that you’re a lot more sensitive to caffeine than you actually thought.

In any case, to be perfectly safe, it’s always best to consult with a health specialist before adding any energy drink to your diet, especially if you’re new to the whole energy drink thing in general.

To conclude, so long as you have it in moderation, G Fuel is definitely a reliable energy drink brand, and will serve you well whether you’re trying to wake up, or give yourself the edge in those intense gaming sessions.

If you’re looking for other great energy drinks that are similar to G Fuel in but in a canned format, here’s a quick list to get you started:

There are also some other great powdered options for you to consider too:

If G Fuel products have too much caffeine for your taste, how about an energy drink that’s lighter on the caffeine but with an even better energy boost?

REIZE is a great powdered energy drink that comes in a convenient 4g sachet. It has a sensible 50mg of caffeine, is completely sugar-free, and has just 11 calories per serving.

Try REIZE today, and I’m sure you’ll agree that it’s a smarter choice than G Fuel.