Can You Drink Venom Energy Every Day? (Detailed) 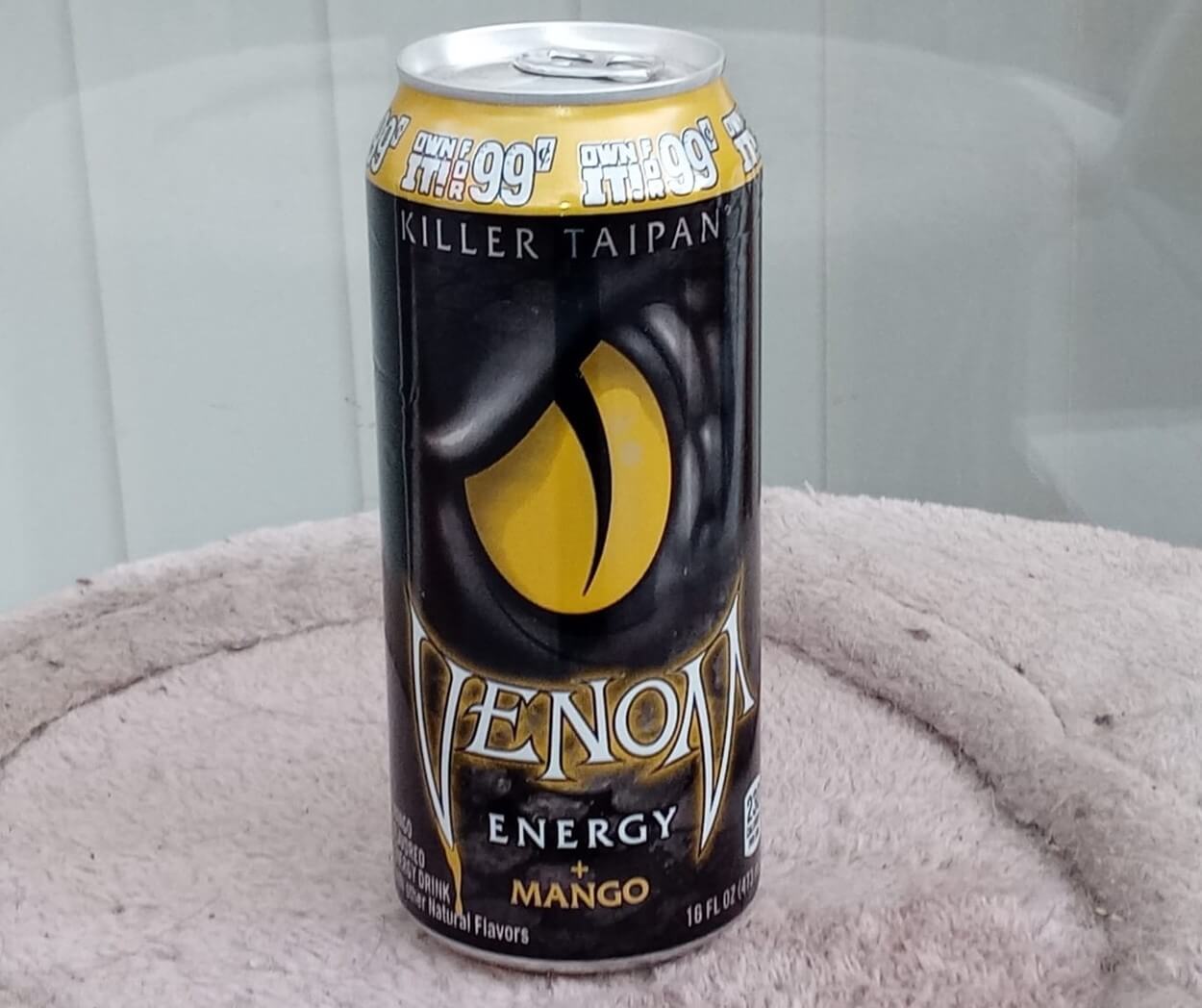 Need a splurge of energy to get you going? Venom Energy Drink’s got you covered.

Packed with caffeine, sugar, and everything you’ll want in an energy drink, Venom will surely deliver an awesome kick to make you pumped and alert for your day.

Although it sounds amazing, can you drink Venom every day?

A brief answer, provided you consumed it in moderation and limit your intake to one can per day, Venom Energy will supply you with the boost you’re looking for. That said, there are much healthier energy drinks out there.

For an in-depth discussion, read on to find out more about Venom Energy Drink, from its ingredients to how suitable it’d be for certain diets, and if you can drink Venom every day or not.

If you want to find out more on how well Venom Energy Drink works, check out my review on Venom for my thoughts and experience with it.

For starters, let’s go through a breakdown of the nutritional values in a single 16 fl.oz can of Venom Energy to know what we’re working with:

How Many Calories Are In Venom Energy Drink?

A single 16 fl.oz can of Venom Energy Drink has 230 calories.

For guidance, the recommended daily calorie limit is between 2000 to 2400 calories for women and 2400 to 3000 calories for men. Thus, it’s easy to see that a single can of Venom would definitely leave an impact on your overall diet.

That said, Venom’s high-calorie content would provide you with some workable energy to burn during exercise.

But, if you’re trying to keep a healthy figure or are following a diet, Venom Energy wouldn’t be the best choice.

If you prefer something with fewer calories, I’ve written an article on the best zero-calorie energy drinks, which you can check out for some amazing picks.

Each 16 fl.oz can of Venom Energy Drink contains the following ingredients:

How Much Caffeine Is In Venom Energy Drink?

There is 160mg of caffeine in every 16 fl.oz serving of Venom Energy Drink.

Venom’s caffeine content is pretty moderate for an energy drink of its liquid volume, and actually has the same amount of caffeine as other pick-me-ups like Monster and Full Throttle.

Caffeine is an important ingredient in energy drinks, since it carries a number of benefits, from making you more alert to increasing your physical performance.

For me, the caffeine levels in Venom Energy might be slightly too much, since my caffeine preference is between 50mg to 100mg per drink.

That said, if your caffeine metabolism is relatively high, you might need more than one can to get the kick you need, though I wouldn’t recommend it due to its sugar content.

Of course, like everything we eat and drink, caffeine isn’t something you should go crazy with.

For reference, the FDA recommends a daily caffeine limit of up to 400mg for healthy adults. Any more than that, and you might end up with adverse effects like:

Thus, while the caffeine present in Venom might be considered average, you should still keep your caffeine intake in moderation and take note of the other caffeinated foods and drinks you consume in a day to avoid overshooting the limit.

How Much Sugar Is In Venom Energy Drink

Each 16 fl.oz can of Venom Energy Drink contains 54g of sugar, which is pretty high for an energy drink of its size.

The sugar content in Venom Energy is sourced from high fructose corn syrup, which is a sweetener derived from corn syrup.

While it may seem healthier since it’s made from corn, a natural ingredient, it’s actually just as bad as table sugar.

Plus, considering that the AHA recommends a daily sugar intake of up to 25g and 36g for women and men respectively, the sugar content of Venom Energy definitely exceeds the limit.

Consuming excessive amounts of sugar over time can lead to some serious health problems, such as:

Besides, having a lot of sugar within a short time would make you more prone to a sugar crash, which leaves you feeling sluggish.

Hence, make sure to take note of your Venom Energy intake, as well as monitor your daily sugar consumption to stay on the healthy side.

Are There Artificial Sweeteners In Venom Energy?

Venom Energy does contain sucralose, an artificial sweetener, to enhance its taste and flavor.

Sucralose is a zero-calorie sweetener that has a higher level of sweetness than regular sugar. It’s mainly used to improve the flavors of food products, as it doesn’t cause any changes in blood sugar levels.

As sucralose is pretty sweet, it’s a healthier alternative to satiate your sugar cravings.

If you’re worried about its safety, you can rest assured because sucralose has been approved by the FDA for general use and consumption.

That said, it’s not wise to have too much sucralose, as the potential long-term effects of artificial sweeteners still raise plenty of concerns.

In any case, as long as you moderate your Venom Energy intake, and avoid including sucralose in all your meals, you’ll be fine.

With 160mg of caffeine, 54g of sugar, and lots of vitamins, Venom Energy will definitely supply you with plenty of energy and mental focus for your day.

Plus, Venom Energy is filled with different amino acids like taurine and L-carnitine, which would give you an extra edge in your physical performance to burn more calories.

While Venom Energy definitely works like an energy drink, I wouldn’t recommend having too many cans daily. It’d be way better for your health to stick to just one can per day, owing to its high sugar content.

While it’s not officially certified as gluten-free, Venom Energy doesn’t seem to contain any traces of rye, whey, and wheat products, thus it can be considered safe for gluten-free diets.

If you’re looking for more gluten-free alternatives, check out my article on the best gluten-free energy drinks for some great recommendations.

If you’re following a vegan diet for health benefits, you’ll find no issues with having Venom Energy. But if you’re an ethical vegan, you may want to steer clear of this drink.

In any case, it boils down to your reasons for following a vegan diet and how strict you are with your diet to make the final call.

For an in-depth look at how vegan Venom actually is, have a look at the article I’ve written on whether or not Venom is vegan, you’re sure to find it informative.

Since a keto requires a daily intake of low-fat, high-carb foods, Venom Energy isn’t suitable for this kind of diet at all, owing to its high sugar and calorie content.

Though, you don’t have to worry, as there are many other energy drinks that are much healthier (than Venom) and would suit your keto diet.

How Many Venom Energy Drinks Can I Have In A Day?

In my opinion, you can have only 1 can of Venom Energy Drink in a day, considering it has a very high sugar and calorie content.

While Venom’s caffeine content won’t be much of an issue, but its calorie and sugar content is going to cause quite a few health problems, particularly if you have more than one can in a day.

Additionally, Venom also has high-fructose corn syrup, which isn’t something you would want to add to your daily diet if you’re trying to stay healthy.

As such, my advice would be to crack a can of Venom open when you really need a burst of energy and sugar to get you back on your feet.

While it’s undeniable that Venom is a tasty drink, be sure to not go overboard with it, especially if your lifestyle is quite sedentary; after all, there are better energy drinks for daily use out there.

Is It Okay To Drink Venom Energy Drink Every Day?

Having a can of Venom Energy Drink every day is perfectly fine as long as you’re healthy and have an active lifestyle.

While its caffeine content of 160mg is considered moderate to some, you might find it to be too much if you’re sensitive to caffeine.

But if you feel that 160mg of caffeine isn’t a problem, having Venom Energy Drink every day will cause your tolerance too quickly build up, which leads to an addiction, so that’s something you might want to watch out for to protect your health.

You should take caution with having Venom Energy Drink every day if you have a particularly sedentary lifestyle. Venom Energy is loaded with sugar, followed by a high-calorie content, which could lead to weight gain and other health issues if you don’t actively burn the calories off.

To know more about the potential effects of energy drinks on your health, check out the video below:

While Venom has a great taste and an amazing boost, here’s a selection of awesome alternatives that’s similar to Venom Energy:

You could also consider powdered energy drinks as well, since they’re more convenient and give you more flexibility to personalize your beverage based on your preferences:

While Venom Energy may be a good energy drink, but if you’re looking for something with less caffeine and sugar, you should certainly go for REIZE.

REIZE is a powdered energy drink that can be found in light and suitable 4g sachets. With a sensible 50mg of caffeine, REIZE is also sugar-free and has only 11 calories per serving.

Plus, REIZE has a smart blend of beneficial ingredients like taurine, ginseng and B-group vitamins. This combo will effectively provide you with a smooth energy boost without the sugar crashes later.

The best part is that REIZE ships to your doorstep for only around $1 per sachet, which is great value for money.

Give REIZE a try today, and you might find it to be the better alternative to Venom Energy Drink.