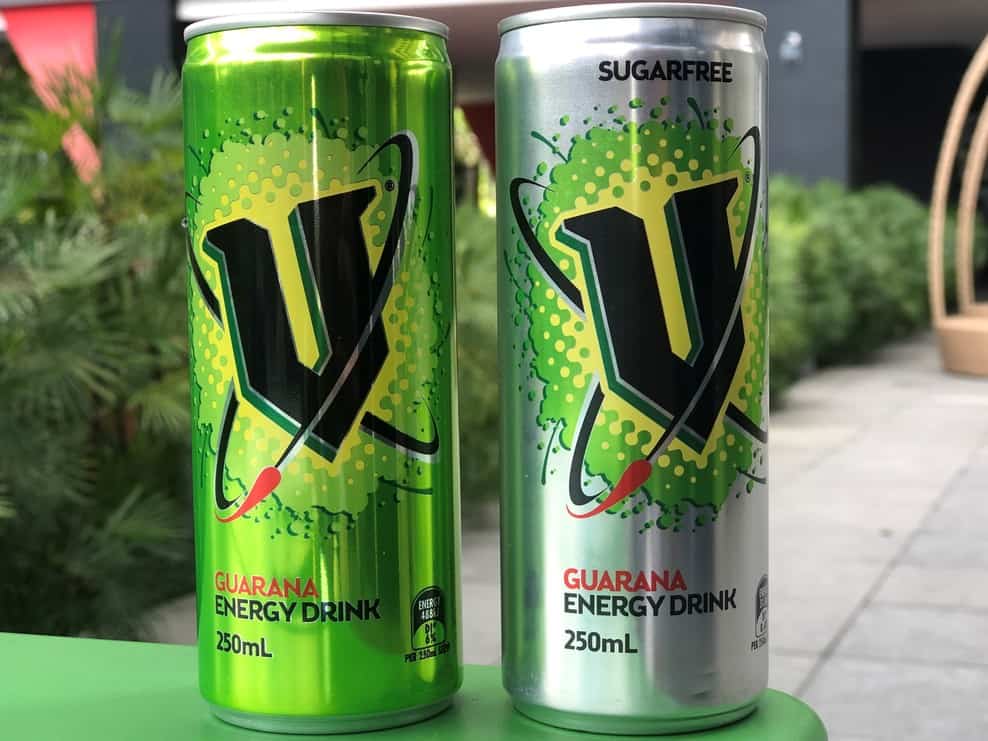 Featuring Guarana, V Energy Drink is a leading energy drink brand in Australia and New Zealand, with its distinct light-green colour being instantly recognisable by any energy drink enthusiast in the region.

With its potent blend of caffeine, guarana and other ingredients, V Energy will certainly give you the boost that you need, but just how many of these can you have a day and should you actually be drinking a can of V every day?

If you’re in a rush, so long as you’re relatively healthy and know how to moderate your caffeine and sugar intake, having a can of V Energy every day should be perfectly fine.

For the longer, more detailed answer, read on to find out more information on the ingredients and nutrition facts of V Energy, and whether or not you can or should be having V Energy every day.

A standard 275ml can of V Energy Original has 128 calories, while the Sugar-free version only has 8 calories.

For comparison, a 250ml can of Red Bull has 110 calories, so V Energy has a fairly typical amount of calories for energy drinks for its size.

Given that you need about 2000 to 2500 calories per day (depending on metabolism and other factors), V Energy’s 128 calories shouldn’t really put that much of a dent into your overall diet.

That being said, having multiple cans per day will definitely add up in the long-run, which may lead to weight gain and other potential side-effects.

You certainly need calories to function, so having some amount of calories in V Energy isn’t necessarily a bad thing, especially if you’re able to burn it off through exercise.

Just don’t go substituting actual meals for energy drinks; although they might give you a quick boost, the actual energy you get is pretty small, and you’re not getting the full range of nutrients as you would from a healthy meal either.

All-in-all, a single can of V Energy seems to be fairly balanced from a calorie standpoint, although having more than one can in a day isn’t exactly advisable if you want to keep on the straight and narrow with your diet.

If you’re not too fond of calories, I’ve written an article on the best zero-calorie energy drinks where you can find some great alternatives that might work better for you than V.

A quick list of ingredients for Green V and Sugar-Free V, with the different ingredients between them, bolded.

There’s 85mg of caffeine in an original 275ml can of V Energy Drink.

Given that there are energy drinks out there with up to 300mg of caffeine, V Energy has a fairly small amount of caffeine with 85mg, only slightly more than a regular can of Red Bull (80mg per 250ml).

Caffeine plays a pretty big part in energy drinks, due to the fact that it’s able to keep you awake and helps to temporarily improve reaction times and cognitive function.

Of course, caffeine is only effective and helpful if you can handle it, so keeping things within your personal tolerable limits is highly recommended.

I personally prefer somewhere between 50 to 100mg of caffeine per serving for energy drinks.

As such Green V Energy has just the right amount of caffeine for me, as it just has enough to give me a quick boost, but not too much that I might feel jittery from all the caffeine later.

Depending on your caffeine metabolism, however, you might need a few more cans of V before the caffeine actually kicks in, especially if you’re already used to having caffeinated beverages daily.

That said, it’s best to not overdo it on the caffeine either. The FDA approves a caffeine intake limit of no more than 400mg per day, as any more than that might lead to side effects such as:

So if you start to feel any of the effects above, even if you haven’t had enough caffeine to go over that limit, it’s probably for the best to put down that can of V Energy and save it for later – or tomorrow.

All-in-all, the key to any good caffeinated beverage experience is moderation, so be sure not to have too many V Energy Drinks at any given time, and try not to double down with tea or coffee if you do plan on having a can of V.

The original Green V Energy has 29.2g of sugar per 275ml, while Sugar-Free V has no sugar at all and uses artificial sweeteners instead.

Considering that the AHA recommends a daily sugar intake limit of no more than 25g for women and 36g for men, V Energy is definitely a bit high on the sugar content.

Of course, some sugar in moderation isn’t exactly the worst thing in the world, given that it’s an easy source of calories, plus its sweet taste helps to improve the flavour of the drink as well as your mood.

While it’s fine to go over the daily sugar limit every now and then, having too much sugar consistently can lead to some notable health problems such as:

Having too much sugar in a short period can also lead to you having a sugar crash, where you feel slow and lethargic as your blood sugar returns to normal, which isn’t something you want from an energy drink.

So while sugar is definitely a tasty sweetener in Original Green V Energy, if you’re not too fond of it, there’s always the sugar-free version of V Energy, albeit with artificial sweeteners instead of sugar.

For more information on sugar and how much of it you should be having, have a look at this video:

Does V Energy Use Artificial Sweeteners?

As zero-calorie sweeteners, Sucralose and Acesulfame Potassium won’t have a negative effect on your overall diet, giving you the sweet taste you crave without the crippling sugary guilt that often comes with it.

Still, the long-term use of artificial sweeteners still has quite a bit of uncertainty surrounding them, so it’s understandable if you generally prefer to avoid them, even if they aren’t detrimental to your health.

Both Sucralose and Acesulfame Potassium have been approved for general use by the FDA, and many other health agencies around the world.

So as long as you’re not constantly having too many drinks with artificial sweeteners present, you should be perfectly alright.

With 330mg per 275ml can of V Energy, Guarana is a key ingredient in V Energy Drinks, and is the source for much of its unique aesthetic and taste.

Guarana is included in V Energy Drink for good reason, boasting an impressive mix of stimulants and antioxidants.

While Guarana is also featured in other energy drinks such as Rockstar, V Energy seems to be specifically focused on Guarana in their marketing material, which definitely makes it stand out from the crowd.

However, a major component of Guarana is actually just caffeine, so its ability to reduce fatigue and improve focus isn’t exactly very surprising.

So while Guarana may be great, be aware that you might be having a bit more caffeine than what is stated on the label, although, given V Energy’s already small caffeine content, this shouldn’t be too much of an issue.

How Many V Energy Drinks Can You Have A Day?

I personally recommend that you stick with only having one can of Green V Energy per day, owing to the high sugar content.

Given that Original V has a relatively high sugar content, having any more than one can in a day might lead to some noticeable health issues down the line, including metabolic syndrome.

As such, while the caffeine content of Original V isn’t particularly high, it’s still best to stick with one can per day because of the sugar, especially if you want to stay on the healthier side of things.

As for Sugar-Free V, you only really have to worry about the caffeine content, which means your caffeine tolerance is the only limiting factor, although I still would recommend at max two cans per day.

Although you don’t have to worry about sugar for Sugar-Free V, it’s still best to stay within the 400mg daily caffeine limit (or lower depending on your personal tolerance), as to not get overwhelmed by the effects of caffeine.

So while you technically can have up to 4 cans of Sugar-Free V a day without exceeding the safe limit of caffeine, sticking to a lower number is definitely recommended.

Is It Okay To Drink V Energy Drink Every Day?

As long as you’re relatively healthy and know how to regulate your energy drink intake, having a can of V Energy Drink per day is perfectly reasonable.

There’s really not that much in a V Energy Drink that should be too concerning for daily use. Granted, the sugar content might be an issue, but so long as you’re only having one per day, that shouldn’t be a huge issue either.

Just make sure that the rest of your diet is healthy and balanced and you’re doing a good amount of exercise to burn off the sugar that you’re putting into your body.

There’s also Sugar-Free V, which doesn’t have sugar and practically halves the nutritional worries of having a V Energy Drink, since you only have to focus on not going over the daily max caffeine limit.

All-in-all, as long as you’re only having one when you need it, V Energy Drinks will definitely give you the boost you need to get through your day, without giving your body too much caffeine or sugar in a single serving.

If you enjoy the taste of V Energy Drink here are some other alternatives that you might also find intriguing:

There are also some awesome powdered options too, such as:

While V Energy might be a pretty good energy drink, if you want something a bit lighter on the caffeine and a lot more affordable, REIZE ticks all the right boxes.

REIZE is a great powdered energy drink that comes in convenient 4g sachets. With a sensible 50mg of caffeine, it’s completely sugar-free and has only 11 calories per serve.

REIZE also contains a smart blend of taurine, ginseng, and B-group vitamins, combining to give you the perfect energy boost without the sugar crash afterward.

You can get REIZE delivered straight to your door for only about $1 per drink, which is amazing value for money.

Does 5 Hour Energy Actually Work? (The Truth)
← Previous
Energy drinks VS Pre-Workouts (and what they do)
Next →
Comments are closed.