Caffeine Crashes (And Simple Steps To Avoid Them) 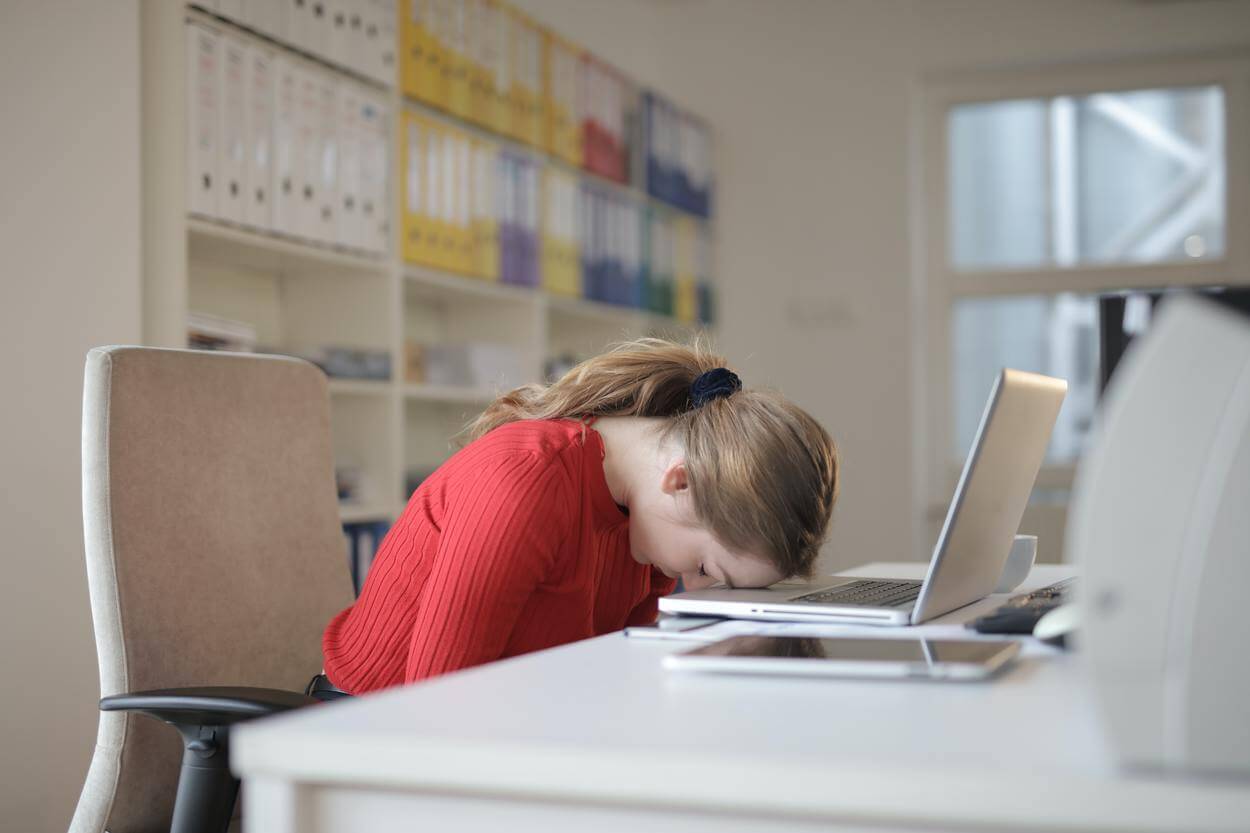 I bet you’re no stranger to caffeine as you’ll often find caffeine in your drinks, being present in tea, coffee, and energy drinks.

Caffeine stimulates your nervous system and brain, which enhances your focus and alertness at the same time, leading to a delay in fatigue.

However, you can have too much of a good thing. When you drink caffeinated beverages like coffee, tea, and energy drinks excessively, it can lead to a caffeine crash, due to the after-effects of all that caffeine being processed through your system, or simply losing the effects of caffeine after a long day’s work.

You probably have a lot of questions, such as what is a caffeine crash? What happens to your body? Should you be worried? And are there any ways for you to alleviate the crash?

If you are a caffeine junky, you might be interested in the list of strongest energy drinks. Otherwise, stick around and find out more about the caffeine crash.

Putting it simply, a caffeine crash will leave you feeling sluggish, fatigued, and irritable.

Caffeine crash is characterized by symptoms such as:

What Causes A Caffeine Crash?

There are two possible reasons why you feel a caffeine crash.

The average caffeine content in an energy drink is about 242mg, which is about half the caffeine limit recommended by the FDA.

Energy drinks are usually fueled by caffeine, which is why they give you alertness and focus.

What Is Inside An Energy Drink?

What is inside an energy drink that makes you feel energetic and awake?

There are two major components: caffeine and sugar.

These are the two prime ingredients inside an energy drink that gives you the needed energy and sharpness throughout your day.

Sugars like inositol are incorporated into energy drinks as a sweetener factor.

Most energy drinks have an average sugar content of 36g or 8.5 tsp, and according to the American Heart Association (AHA), the limit of consuming added sugars are:

The average sugar content in energy drinks is above the limit for women and is barely below the limit for men, so while having one can is alright, having more than one will leave you with an excessive amount of sugar.

Always consume sugars in moderation. You don’t want to get addicted to them, as too much sugar will lead to the following:

As such, be sure to keep your energy drink intake at healthy levels. While sugar may be an easy source of energy, it’s also not the healthiest.

How Long Does A Caffeine Rush Last?

The moment you consume caffeine, your body will immediately feel the effects though it takes 30 to 60 minutes to reach a peak level in your bloodstream.

Caffeine’s half-life is up to 5 hours. Half-life is the time taken for a specific quantity of a certain substance to be reduced to half the intake amount.

This is the time you’re going to experience the effects of caffeine. The jitteriness, the heart beating faster, and the sudden rush of focus.

So if you’ve consumed 242mg worth of caffeine, you’ll still have 121mg of caffeine inside your body after 5 hours. The other half of the caffeine that you consume can last much longer than 5 hours.

If you have low caffeine tolerance, you might feel the symptoms for hours or even a few days after consumption.

How to Avoid a Caffeine Crash

The symptoms of a caffeine crash may be detrimental to your overall productivity throughout the day. It may even last for a few more if you have a low tolerance for caffeine.

Luckily for you, I’m going to show you 4 tips on how to avoid it:

Generally, you would turn to caffeinated beverages when you feel groggy as it promotes wakefulness and alertness throughout the day.

Although it may be difficult to achieve a good night’s rest every night, it’s essential in caffeine crash prevention.

When you consume caffeine when you’re tired or deprived of energy, the caffeine will work to relieve those feelings temporarily. However, once the effects of caffeine wear off, you’re just going to feel more tired than before.

The effects of caffeine are much stronger in your sleep-deprived state than when you’re well-rested. Good sleep may reduce your reliance on caffeine, and this would prevent you from experiencing a caffeine crash.

It’s not rocket science that the more caffeine you consume, the longer it will take for it to leave your body.

When you consume excess caffeine, you’re setting yourself up for a caffeine crash, and it may cause several mild to adverse effects.

According to the FDA, the daily caffeine limit is 400mg, so as long as you stay below the limit, you should be safe from any caffeine crash.

With that being said, how you react to caffeine would largely depend on your metabolism, which determines your caffeine tolerance. With a high tolerance to caffeine, you’d have no trouble drinking it in high amounts.

However, if you have low tolerance, you’ll most likely feel the full effects of caffeine even without drinking the full dosage.

Effects of consuming a lot of caffeine include but are not limited to:

When consumed in appropriate amounts, caffeine is safe for most people.

Since genetics influence how fast someone metabolizes caffeine, a lower amount of caffeine content may be a more appropriate and safe consumption level.

There are also instances where caffeine may interact with certain over-the-counter and prescription medications, so always check with your doctor or pharmacist to know and determine if caffeine is safe for you to consume.

Getting adequate sleep can be difficult if you consume too much caffeine throughout the day or too close to bedtime.

Since caffeine has an average half-life of about 5 hours, half of the total amount of caffeine you consume remains in your body.

Therefore, to avoid caffeine affecting your sleep, it’s generally recommended that you avoid consuming it within 5–6 hours of bedtime.

The disruption that you experience throughout your sleep or the difficulty in falling asleep can compound the feelings of sleepiness and fatigue the next day.

Depending on your caffeine tolerance and the time you usually go to bed, it may be best to only consume caffeinated beverages early in the day.

If you are a regular consumer of caffeine, you may have formed a dependence on caffeine, so it’s best to slowly decrease your caffeine intake gradually over a few days to weeks.

When you quit caffeine out of the blue, you may experience a caffeine withdrawal, so if you feel a caffeine crash when you skip your energy drink or coffee, you can consume the beverage to reduce your symptoms.

What Is Caffeine Withdrawal?

If you’re used to drinking caffeine and you suddenly stop doing so, you might experience caffeine withdrawal.

According to the American Heart Association (AHA), you might experience certain withdrawal symptoms within 12 to 24 hours of your last caffeinated beverage. These symptoms may include but are not limited to:

Withdrawal symptoms typically begin 8–12 hours from when you last consumed caffeine, and peak after 1–2 days, lasting for up to a week.

The best way to cut out caffeine is to gradually decrease the amount you consume every day.

Here is a video to further enlighten you on the topic.

Can You Flush Caffeine Out Of Your System?

Once it has entered your body, there isn’t much you can do to flush the caffeine out. The only way to get rid of it is to wait for it to flush itself out of your system.

Nevertheless, you can take a few steps to minimize its side effects.

How Long Until Caffeine Is Completely Out Of Your System?

The duration at which caffeine remains in your system largely depends on your metabolism.

As stated before, the half-life duration of caffeine is 5 hours. So you will still have half of the caffeine inside your system.

Now that you’ve learned how to avoid caffeine crashes in this article, it’s time for me to show you a favorite drink of mine that will keep the caffeine crashing to a rare minimum.

REIZE comes in a small packet, allowing you to take it anywhere. Besides that, it’s sugar-free and only has 50mg of caffeine, which is way below the high average caffeine content of other energy drinks.

Its minimal caffeine amount is perfect for you if you don’t want to feel the dreaded caffeine crash, being a great fit if you want an energy drink without too much caffeine.

Plus, you can get REIZE shipped to your door for only about $1 per drink. which is great value for money!

Give REIZE a try, and you might find that it’s the best energy drink for keeping you energized and alert for the day.