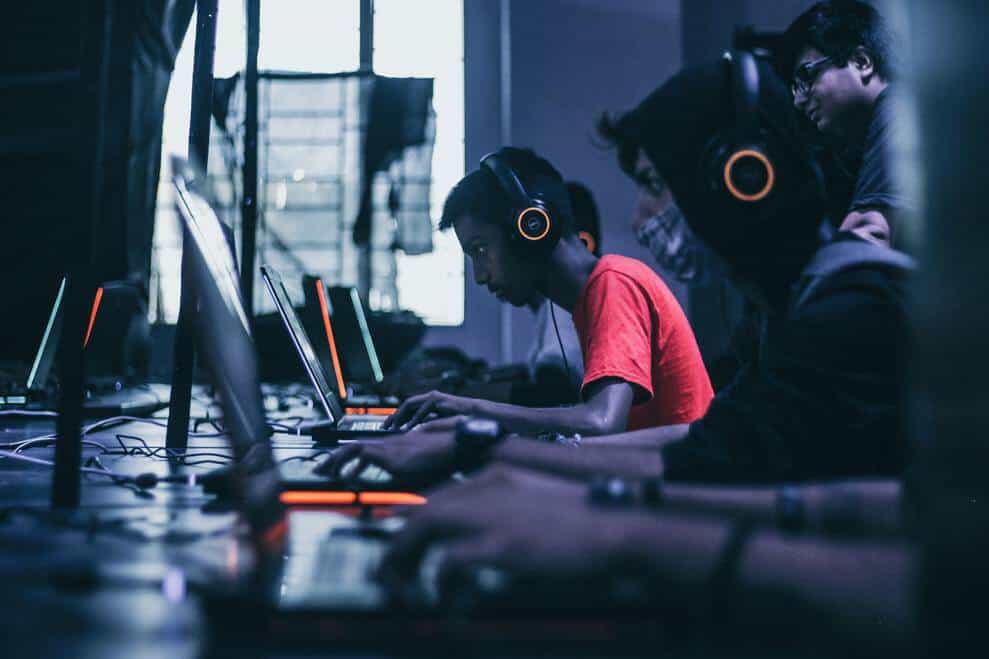 Developed by Valve and Hidden Path Entertainment, Counter-Strike: Global Offensive (CS:GO) is a multiplayer first-person shooter video game that has taken the world by storm.

Like most games in its category, CSGO has matches where players can join a 5-man team and participate in competitive tournaments held internationally.

CSGO can involve long hours of gameplay, which’ll take a toll on your body and mind.

When you’re sleepy or not a hundred percent focused, you could make small mistakes that’ll cost you and your team a victory.

Performance is paramount when playing CSGO, and energy drinks will be able to help you perform at your best.

Energy drinks are well-known for giving their users a slight edge in physical and mental performance.

But, you may be wondering, what is the best energy drink for CSGO?

In this article, I’ll talk about how energy drinks can help you in CSGO and provide a few of the best energy drink suggestions that you can try out.

What To Do As A Beginner In CSGO?

Though easy to learn, CSGO can be difficult to master. CSGO, like all the best games out there, requires practice, dedication, and patience whether you’re a fresh player or have already gone pro.

In fact, many professional CSGO players that possess all-rounded skills also go through hours of practice to improve themselves.

An article from SkinWallet explains a few tips you can follow to get better at CSGO:

There are many other ways to enhance your skills as a beginner in CSGO, but the best way to get better at CSGO is to practice a lot and work efficiently as a team.

Skills To Master In CSGO

Counter-Strike: Global Offensive may seem like a simple game, but to win in this game, you’ll need to master certain skills.

One of the most important skills you need to be proficient at is how to aim.

You have to learn to use hip-fire and how it works so you can acquire a 100% clean shot. Learning how to counteract recoil patterns when you’re firing using proper mouse movements will help you tremendously as well.

Besides that, you should also be aware of your movement and stand still while you’re firing if you want to land a hit. Once you’ve mastered these skills, you should practice frequently to continue honing your skills to build up muscle memory.

In addition to these skills, you need to communicate effectively with your team members.

You can’t secure a win if you and your team members don’t get along well and help each other out. Everyone should know their role in the team and properly plan out strategies to complete tasks and take out the opposing team together.

What To Look For In Energy Drinks?

Caffeine is the main ingredient in energy drinks that boosts your energy and makes you more awake.

If you remove caffeine from energy drinks, they won’t actually be effective.

Energy drinks can contain varying amounts of caffeine, depending on the brand, though they usually range from as low as 50mg to 300mg or more per drink.

Caffeine can be beneficial to your health, provided you don’t go overboard with it.

Healthy adults are recommended to limit their caffeine consumption to only 400mg a day according to the FDA.

Excessive consumption of caffeine can lead to caffeine overdoses and other health risks like insomnia, digestive issues, and muscle breakdown, especially in the long run.

Therefore, you should always consume caffeine in moderation and stick to the FDA’s recommended maximum daily caffeine intake.

However, consuming too much sugar isn’t good for your health, as it could cause a sugar crash and increases the likeliness of developing health problems like:

The AHA has a recommendation on how much sugar you can have in a day:

The good thing is that there are plenty of sugar-free energy drinks available for you to choose from nowadays.

I’ve written a comprehensive article on the best energy drinks that are sugar-free you can check out if you’d like.

Energy drinks also contain other ingredients like guarana, B vitamins, and taurine.

Guarana contributes a lot to the caffeine content in energy drinks, though it usually isn’t added to the total amount of caffeine stated on the label of the drink, so be careful with that.

If you’re curious to know how much caffeine guarana has, 1g of guarana equals 40mg of caffeine.

Of course, energy drinks contain many other ingredients aside from the ones I’ve mentioned here.

To understand the ingredients in energy drinks, you should always read the nutrition facts on the back of the can. If you’re unsure about any of the ingredients, ask your doctor what they think to avoid any adverse effects or complications.

If you’d like to learn more about energy drink ingredients and what their functions are, feel free to have a look at this other post I’ve written where I cover everything you need to know.

Can Energy Drinks Keep You Awake During CSGO Matches?

Energy drinks can keep you awake for many hours, thus drinking these drinks will help you stay up for longer and power through your CSGO matches.

Playing matches in CSGO with your team can go on for a long time and eventually wear you out.

When you’re tired, you’re unable to stay awake and would probably be thinking about sleep the whole time, which can affect your performance in-game.

No matter what position you have in your team, your performance is what separates victory and defeat at the end of the match.

You don’t want to be the weak link on your team.

Energy drinks contain caffeine, which is the core ingredient that can help you to stay alert for longer. Like your regular cup of java, energy drinks can decrease the symptoms of drowsiness and increase your alertness and wakefulness.

In fact, there are many studies that have proved that caffeine can reduce fatigue and elevate your energy levels, especially when working at night or staying up for extended hours.

One study involving the administration of 250mg of caffeine to 24 participants found that their alertness and vigilance improved after the ingestion of caffeine.

Another 2005 study conducted on 30 soldiers discovered that consuming caffeine sustained marksmanship vigilance by 85%. It also maintained their psychomotor performance even in a state of sleep deprivation.

So, if you’re in need of a boost when you’re starting to feel sleepy, you can always grab an energy drink to energize yourself and get your head back in the game.

But it goes without saying that you must be mindful of how much caffeine you’re consuming while you’re playing CSGO to avoid excessive consumption of caffeine, which will be counterproductive to what you’re trying to acheive.

Caffeine can indeed help boost your brain functions for better performance during your CSGO matches.

A 2008 review reported that aside from maintaining hydration and augmenting physical performance, caffeine could also improve mental performance and mood.

Besides that, a 2001 study performed on 36 volunteers found that caffeine was beneficial in enhancing alertness, reaction time, concentration, and memory.

After drinking caffeine, you’ll be able to react faster when you’re firing at the enemy and remember map points better.

Another study found that caffeine consumption increased performance in simple and choice reactive tasks, a task that required sustained response and cognitive vigilance.

These are the mental functions you need to tap into during your matches, as CSGO isn’t just about landing hits at your enemy, but also making proper strategies for a smart and effective win.

It doesn’t stop there either. Caffeine can also improve your problem-solving skills, which will come in handy when you’re figuring out tactics to take down the enemy team.

However, as much as caffeine maximizes your cognitive performance, you should always stay under the recommended daily caffeine limit of 400mg and consume caffeine in moderation.

Too much caffeine could instead have the opposite effect on you, negatively impacting your performance.

When Should You Drink Energy Drinks?

You should drink energy drinks 30 – 60 minutes before your gaming sessions start to get the best results as that’s when the caffeine effects are at their peak.

Depending on your metabolism, caffeine can stay in your body for 12 hours or more. Of course, this also depends on what kind of energy drink you had and how much caffeine it contained.

Generally, the more caffeine you consume from an energy drink, the longer it’ll stay in your system. The effects will last longer but it won’t be as strong as the first hour after drinking the energy drink.

Caffeine has a half life of around 5-6 hours, meaning that if you consume 200mg of caffeine now, you’ll still have about 100mg remaining in your bloodstream 5-6 hours from now. It generally takes about 12 hours for all caffeine to be out of your system.

If you drink an energy drink that has high levels of sugar, you might get a temporary energy boost before it’s followed by a sugar crash which may leave you feeling tired and sluggish.

In no particular order, I present to you some of the best energy drinks for CSGO…

Monster Energy is one of the most popular energy drink brands on the planet and can be found in most stores you’ll come across.

With 179mg of caffeine, the caffeine boost you’ll get from Monster could supply you with the alertness and wakefulness you need during your gaming matches.

However, if you’re sensitive to caffeine or have a lower caffeine tolerance, drinking Monster might make you jittery and could instead mess up your performance in-game.

Monster also has concerning sugar amounts in each can, which to me, is too much to be having in a single serving. High levels of sugar may provide you with a stronger energy boost, but it’s temporary, and may possibly cause a sugar crash.

A single can of Monster costs around $3, which is quite pricey in my opinion. If you’re willing to spend a little more cash every now and then, Monster might be a good choice.

If you’re wondering whether it’s safe to drink Monster every day, check out my other article that I’ve linked to here.

If you’re vegan or on a gluten-free diet, you’ll be happy to know that Matchabar Hustle Sparkling Mint energy drink is vegan and gluten-free.

Plus, Matchabar Hustle Sparkling Mint is sugar-free and has few calories.

A can of MatchaBar Hustle Sparkling Mint also costs around $3, which isn’t the most affordable option, though the price varies slightly depending on the flavor you choose and where you buy it.

If you’re looking for something with a more affordable price, maybe Matchabar Hustle Sparkling Mint isn’t for you.

REIZE is the ultimate energy drink for CSGO in my opinion.

REIZE is a powdered energy drink that contains a sensible 50mg of caffeine. That much caffeine is just the right amount to elevate your alertness, concentration, and accuracy without inducing the typical side effects of most energy drinks.

Plus, REIZE is sugar-free and contains just 11 calories. This means no sugar crash and you’ll be able to maintain your performance through several matches.

With a smart blend of ginseng, taurine and B vitamins to go along with the caffeine, REIZE gets the energy boost just right.

REIZE is also very versatile as it can be mixed with 8.4 fl.oz (250ml) of almost any beverages you like, whether it’s tea, water, or juice.

REIZE is also very affordable, shipping straight to your door for only about $1 per drink.

Give REIZE a try today and I’m sure you’ll agree that REIZE is a great companion when you’re playing CSGO.

Bang Energy Nutrition Facts (Analyzed)
← Previous
Can You Drink 5 Hour Energy Every Day? (The Truth)
Next →
Comments are closed.